The Williamstown Town Hall has been slightly neglected for a number of years. 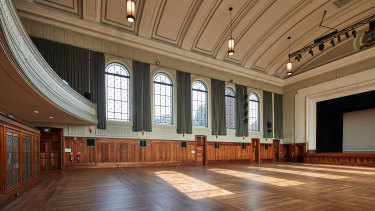 The grand hall has an impressive barrel-vaulted ceiling.Credit:Peter Bennetts

Apart from cosmetic details, such as peeling paint, there were significant structural defects: a sagging roof, outmoded equipment and a number of inappropriate additions over various decades since the town hall was built, prior to the First World War.

“There was even talk of demolishing it and replacing it with a completely new building,” says architect Theo Kerlidis, co-director of K20 Architecture.

A stained leadlight glass window of a lighthouse at the entry to the grand hall was actually produced in the 1980s.

“The more we researched, the more we discovered what was an addition and what was original,” he adds. 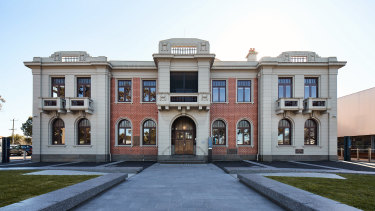 The restoration of the Williamstown Town Hall was overseen by K20 Architecture.Credit:Peter Bennetts

Restored and renovated by K20 Architecture over an eight-year period, the initial focus was on the structural side; a new roof, reworking the Juliet-style balconies and tuck pointing the red brickwork, paramount given the location next to Hobson’s Bay (the moisture had degraded the mortar).

The contemporary library, designed by architect Sally Draper, sits proudly beside the early 20th century pile and is joined to it by a double-height glazed link.

“We were involved in the master planning of the site with the Hobson Bay Council, but the town hall was a case of preserving and rejuvenating,” says Kerlidis, whose initial brief from the council was simply to prevent the main roof over the grand hall from collapsing.

However, one intervention led to another, including new wiring, fixtures and fittings that would also meet current building standards.

The grand hall in the town hall, with its impressive barrel-vaulted ceiling was "rescued" by K20 Architecture.

It was quickly understood that the hardwood timber floor in the grand hall was literally coming unstuck from its concrete substructure.

The architects re-laid the entire timber floor, sourcing an almost identical grained timber and placing it above the original concrete electrical system below.

“We wanted to include all the latest technology, including heating and cooling, without this appearing obvious,” says Kerlidis, who felt like a detective peeling back the layers of time.

Fortunately the council had a number of original fixtures and fittings in storage, some which had been stored for 30 years or more.

“We found the original textured glass panels for the entry screen to the grand hall, allowing us to remove the more recent rendition of the lighthouse,” says Kerlidis, who also discovered original timber door architraves.

Other features, such as the bluestone treads of a staircase, were simply buried under layers of vinyl and carpet.

One of the cues that inspired K20 Architecture was the intricate mosaic tiles in the main lobby and hallways.

From black and white to deep shades of green, it was a process of finding tiles to complete the missing puzzle, both on walls and floors.

The architects collaborated with Nexus Designs in creating a feature wall, upscaling the size of each tile and placing these on glass.

K20 Architects also added new amenities, as well as revitalising many of the council’s meeting rooms to allow their use by various local groups to meet.

“The rooms weren’t being used to their full capacity,” says Kerlidis, who included a booking system with the upgrade.

As well as major structural work, there was an overhaul of the original paint scheme.

Duck-egg blues and beiges from the 1950s were replaced with a sophisticated palette, in sepia tones of greens and greys.

Signposting was also revisited, with gold hand-painted lettering above doors that had gone astray.

Although the original town hall was built in 1914, a significant portion was added in the 1930s, in a slightly Mediterranean style.

“We wanted to create a reading of the history of both eras, celebrating each period in its own right,” says Kerlidis, who saw a responsibility in saving the town hall and allowing it to be enjoyed for the next 100 years.

“Our role in this instance, was more about curating than adding something just for the sake of being contemporary,” says Kerlidis, who is pleased this venue is now solidly booked out for performance and community events.

“The biggest compliment is when people question what’s been done.

It’s only when they see old photos, that they’re reminded of the work.