Rio Tinto, the nation’s top iron ore miner, has brought to an end its long-running disputes with the Australian Tax Office (ATO) by agreeing to one of the largest tax settlements in the country’s history.

The Anglo-Australian mining giant said on Wednesday it had agreed to pay an additional $613 million in tax payments for the period from 2010 to 2021, on top of a further $378 million paid last year. 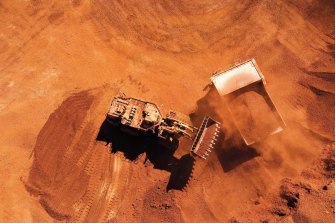 One of Rio Tinto’s disputes with the tax office related to the amount of tax payable from the sale of Rio Tinto’s iron ore and aluminium produced in Australia to the company’s marketing business in Singapore. Another was over the denial of interest deductions on a loan it took out in 2015 to pay an internal dividend.

“This settlement is a very good outcome for the Australian tax system,” she said.

“The resolution of these matters means that ordinary Australians can have confidence that even the biggest companies are held to account to pay their tax due.”

Iron ore – the raw material used in steel-making furnaces to churn out molten pig iron – is Australia’s most valuable export, bringing in $133 billion to the nation’s overall export earnings in the past financial year.

Top iron ore miners BHP and Rio Tinto have been under scrutiny for years by the ATO’s tax avoidance taskforce amid concerns they have been using Singapore-based marketing businesses to buy commodities from their Australian mining operations and on-selling them to customers at higher prices.

BHP settled with the ATO in 2018 and agreed to change the ownership structure of its Singapore marketing hub.

Saint said BHP and Rio Tinto’s settlements would ensure that profits from the nation’s two largest iron ore exporters were kept in Australia.

“This means that additional profits from the sale of Rio’s Australian-owned commodities will be taxed in Australia in the years to come,” she said. “The settlement locks in future tax outcomes, providing certainty going forward.”

In a statement on Wednesday, Rio Tinto said it had separately reached a deal with Singapore’s Inland Revenue Authority to ensure the company was not subject to double taxation.

“We are glad to have resolved these longstanding disputes and to have gained certainty over future tax outcomes relating to our Singapore marketing arrangements,” Rio Tinto chief financial officer Peter Cunningham said. “Rio Tinto remains committed to our commercial activities in Singapore and the valuable role played by our centralised commercial team.”

The ATO said its tax avoidance taskforce, which has helped net $26.3 billion in tax liabilities and $14.9 billion in cash, was focusing on the nation’s energy and resources sectors, including commodity exports and marketing-hub arrangements.