The steps are in line with advice Russia's government provided in June for airlines to use some aircraft for parts to ensure the remainder of foreign-built planes can continue flying at least through 2025.

Sanctions imposed on Russia after it sent its troops into Ukraine in late February have prevented its airlines from obtaining spare parts or undergoing maintenance in the West.

Aviation experts have said that Russian airlines would be likely to start taking parts from their planes to keep them airworthy, but these are the first detailed examples.

At least one Russian-made Sukhoi Superjet 100 and an Airbus A350, both operated by Aeroflot, are currently grounded and being disassembled, one source familiar with the matter said.

RUSSIA SAYS IT WON'T USE NUCLEAR WEAPONS IN UKRAINE, DESPITE THREATENING RHETORIC

The source declined to be identified due to the sensitivity of the issue.

The Airbus A350 is almost brand new, the source said.

Most of Russia's fleet of aircraft consists of Western passenger jets.

The Russian Ministry of Transport and Aeroflot did not reply to requests for comment. 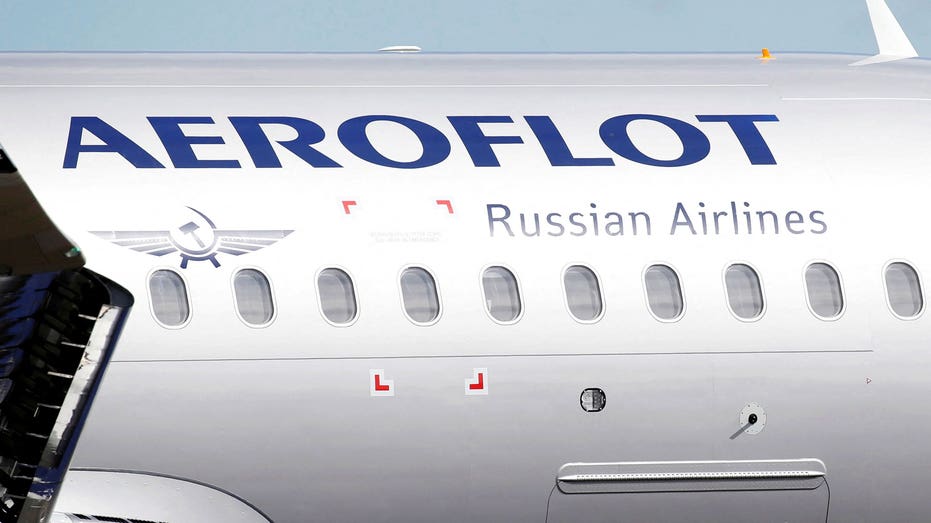 An Aeroflot jet idles in Colomiers, France, on Sept. 26, 2017. Russia’s state-owned airline, Aeroflot, has been forced to start stripping old jets for parts after sanctions made it impossible to import parts from abroad. (Reuters/Regis Duvignau/File Photo / Reuters)

Russian-assembled Sukhoi Superjets are also heavily dependent on foreign parts. An engine has already been removed from one Superjet to allow another Superjet to continue flying, the first source said.

To be sure, engines are frequently swapped between aircraft and are usually supplied under separate contracts, industry experts said. They are not considered part of the core airframe.

It is "only a matter of time" before Russia-based planes are cannibalized, a Western aviation industry source said.

Within a year of the sanctions coming into effect, it will be a "challenge" to keep modern jets in service even for Russia's highly developed and competent engineering base, Western sources have said.

The practice of removing parts to keep another plane flying is commonly known as turning the disused planes into "Christmas trees." Although relatively rare, it is most often linked to financial difficulties and has never happened on the same scale as the widespread reshuffle being predicted in Russia in order to address the impact of sanctions.

Jetliners may be made operational again provided parts taken away are put back, though this would not necessarily reconstitute the traceability needed for jets to re-enter global markets.

Many parts have a limited life that must be logged.

Nearly 80% of Aeroflot's fleet consists of Boeings and Airbuses — it has 134 Boeings and 146 Airbuses, along with nearly 80 Russia-made Sukhoi Superjet-100 planes as of end last year, based on the latest data available.

According to Reuters calculations based on data from Flightradar24, some 50 Aeroflot planes — or 15% of its fleet, including jets stranded by sanctions — have not taken off since late July.

Three out of seven Airbus A350s operated by Aeroflot, including one now being used for parts, did not take off for around three months, the Flightradar24 data shows.

Russian carriers flying fewer routes due to Western sanctions means there are unused jets grounded that can be stripped, a second industry source said.

"Western manufacturers understand that almost all Superjets are being operated in Russia," said Oleg Panteleev, head of the Aviaport aviation think-tank. "You can simply stop producing and shipping spare parts — and it will hurt."

The Russian aviation industry's development plan up to 2030 estimated that Russia could face the biggest challenges with A350 and Bombardier Q series as maintenance on them is carried out overseas.

The Russian government's advice envisages "partial dismantling of … certain parts of the aircraft fleet," which would keep two thirds of the foreign fleet operational by end-2025.

The main challenge will be keeping engines and sophisticated electronic equipment in working order, said Panteleev.

"It will be hard to get them repaired," he said.

Aeroflot, once among the world's top airlines but now reliant on state support, experienced a 22% fall in traffic in the second quarter of this year from a year ago, the company's data showed, after sanctions prevented it from flying to most Western destinations.

Securing supplies from countries that have not imposed sanctions on Russia is unlikely to help, as companies from Asia and the Middle East fear a risk of secondary sanctions against them by Western governments, the sources said.

"Each single part has its own (unique) number, and if the documents will have a Russian airline as the final buyer, then no one would agree to supply, neither China nor Dubai," the first source said, adding that all parts have to be made known to Boeing and Airbus before they are supplied to the end-user.