An uptick in self storage metrics has rewarded Abacus Property Group's concerted effort to pivot its portfolio towards the sector, helping it report a half-year increase in funds from operations and distributions.

Abacus, under managing director Steven Sewell, has nearly completed its pre-stated aim of transforming from a diversified property player into a specialist owner and manager of offices and self storage. 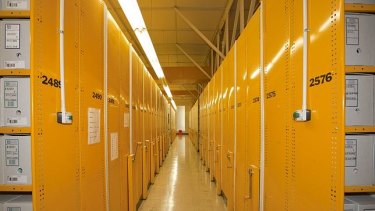 Abacus passed a key milestone of having a $1 billion exposure to self storage.Credit:Photo: Karleen Minney

That shift was facilitated by a $600 million spending spree over the six months to December in what was a "busy and overall a satisfying period for the group", Mr Sewell said, confirming its distribution guidance of 2 to 3 per cent growth for the 2020 financial year.

Funds from operations rose 3 per cent to $67.3 million from the previous corresponding period, while Abacus' distributions per security of 9.45¢ were 2.2 per cent higher.

Abacus' purchase of a B-grade office tower in North Sydney at 99 Walker Street for $311 million in November last year soaked the bulk of the capital splurge, while another $150 million was outlaid on self storage acquisitions.

"In aggregate, these transactions have resulted in the successful transformation of the balance sheet, with 92 per cent of investment assets deployed into key sectors," Mr Sewell said.

Once Walker Street settled in January, gearing returned to "more traditional levels," around 26.8 per cent, he said.

The group's $3.3 billion portfolio still includes legacy residential assets – in particular a substantial chunk of development land at Riverlands in NSW's Milperra – which Abacus is waiting for "optimal market conditions" to divest.

"In time, our clear aim is to repatriate every dollar from this segment to deliver back into the balance sheet, however, we will be patient," he said.

The group reported a statutory profit of $82.1 million, down from $127.8 million the previous period, but passed a key milestone of having a $1 billion exposure to self storage.