The publications – Argumenty i Fakty, Moskovskii Komsomolets (MK) and Unification – are on a newsstand at the front of the shop with publications written in Italian, German, French and Greek. They also sit alongside Sydney’s local Ukrainian newspaper, The Free Thought, which arrives once a fortnight. 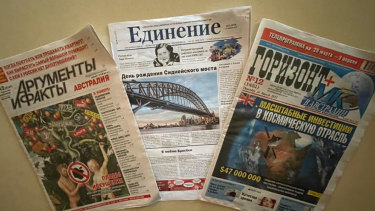 The three Russian newspapers are distributed in Australia each week.Credit:Zoe Samios

They, like international tech giants, are playing a role in the dissemination of news about the war in Ukraine for local readers. And yet the way the war is portrayed in the publications is very different.

Argumenty i Fakty, an international newspaper owned by the Russian government, does not use the words ‘war’ or ‘conflict’ on its front page. The main stories are about selling apartments and growing tomatoes. There are several headlines about Russia and its relationship with the world, but these are focused on sanctions and the support China is giving the country.

A picture filled with Western brands says: ‘Fruits of Temptation. Who will now be tempting the Russian consumer and with what?’ It also says it is natural for Russia to change country’s borders. 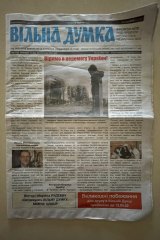 The front page of Russian-owned newspaper MK focuses on investment in space and the formation of Australia’s aerospace armies, rather than the conflict.

Unification, the locally owned Russian newspaper, does not mention the war. The articles promoted include the birthday of the Sydney Harbour Bridge, the latest on COVID and petrol prices. The war is mentioned for the first time on page three in an article about the president of Switzerland declaring his country’s readiness to hold talks regarding Ukraine.

But these newspapers couldn’t be more different from their Ukrainian counterparts.

The most recent edition of Sydney’s local Ukrainian newspaper – The Free Thought – for instance, splashed with the headline ‘We believe in Ukraine’s victory’. Next to it was an image of the monument to poet Taras Shevchenko in Borodianka, with buildings burning in the background.

The circulation of these diasporic newspapers is not publicly available, but for decades they have been accessible to thousands of Ukrainian and Russian people living in Australia (the 2016 Census said there were 13,366 Ukraine-born and 20,425 Russia-born people in the country).

Communications Minister Paul Fletcher’s request for tech platforms to remove Russian state-based media from their platforms earlier this month was a sign of how concerned the government is about the danger of spreading misinformation about the war. But that demand did not extend to newspaper publications (it is not in his remit).

It’s not just the newspapers that are playing an ongoing role in distributing information to these communities. Even with Foxtel and SBS’ decision not to broadcast Russia Today, the Russian-speaking community can still access Russian television via satellite. Meanwhile, Australia’s media regulator is currently investigating a Melbourne-based Russian community radio program after receiving complaints it was broadcasting Kremlin propaganda on the Ukrainian war.

David Hua, SBS’ director of audio and language content, said there was a lot to keep in mind when presenting to these communities. He said SBS had to be particularly mindful of risks of using contributors in the war-torn region.

“We’re taking reports from right around the world. We are very cognisant that the war is very divisive and has been very divisive for communities. Our job is very much around being able to tell the story in a balanced way, to be able to address misinformation when it comes up and to be able to provide that space for people to have trust in a media source.”