Sen. Ted Cruz, the son of a Cuban immigrant, took to Twitter on Sunday in support of the thousands of protesters that took to the streets in Havana to rail against the worsening conditions in the communist country.

Cruz reposted a video that claimed to show dozens in front of the Communist Party Headquarters and said the current regime will be “consigned to the dustbin of history.”

“It has brutalized & denied freedom to generations of Cubans, and forced my family & so many others to flee,” he tweeted. “The American people stand squarely with the men & women of Cuba and their noble fight for liberty.”

Cuba is going through its worst economic crisis in decades, along with a resurgence of coronavirus cases, as it suffers the consequences of U.S. sanctions imposed by the Trump administration.

WSVN reported that protests also broke out across Miami in support of the Cuban people. Hundreds of protesters gathered outside Versailles Restaurant.

“It’s a dictatorship,” one demonstrator said. “No medicine, no food, no freedom, no nothing.” 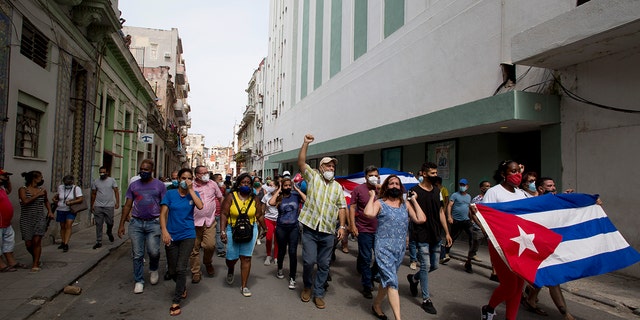 Thousands of Cubans marched on Havana’s Malecon promenade and elsewhere on the island Sunday to protest food shortages and high prices amid the coronavirus crisis, in one of biggest anti-government demonstrations in memory.

Although many people tried to take out their cellphones and broadcast the protest live, Cuban authorities shut down internet service throughout the afternoon.

About 2 1/2 hours into the march, some protesters pulled up cobblestones and threw them at police, at which point officers began arresting people and the marchers dispersed.

Daniella Levine Cava, the mayor of Miami-Dade, took to Twitter to also offer support for Cubans. She called the protest “historic moment in the struggle for freedom, dignity, and basic human rights—may their courageous actions bring about real change and move us closer to the dream of a free Cuba.”

The Associated Press contributed to this report