Billionaire businessman Kerry Stokes' Seven Group Holdings has moved a step closer to board representation at building materials giant Boral after the conglomerate lifted its stake in Boral to 19.98 per cent.

Seven Group increased its shareholding from 16.31 per cent shortly after Boral unveiled a $1.35 billion pre-tax impairment last month, mostly relating to its US operations. At the same time Boral chairman Kathryn Fagg told investors the company was in the process of "board renewal" and recruiting two new directors. 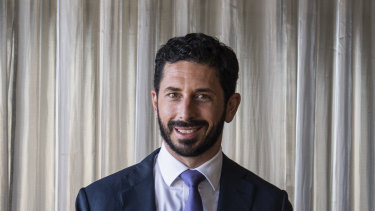 Seven Group Holdings CEO Ryan Stokes said last month that the company had been watching Boral for 6-12 months before investing in the building materials group.Credit:Louise Kennerley

The new directors will be based in Australia and are expected to be announced this year. Long-serving Boral director John Marlay will retire at the end of this year and Eileen Doyle will retire in 2021. Paul Rayner, who is standing for the board again this year, will retire after a replacement is found for his role as chairman of the audit and risk committee.

Seven Group has not publicly stated whether it is seeking representation on the Boral board, but observers widely believe it is likely, as Seven and other major investors seek change at the construction materials giant.

Seven's investment in oil and gas company Beach Energy is seen as a template for its plans at Boral where it built a 28.5 per cent stake in the company and has two board members.

Over the last two years Boral has issued a series of profit warnings, is facing two shareholder class actions in Australia relating to its North American Windows business and its long term chief executive, Mike Kane, recently left the role.

Seven Group Holdings is led by Mr Stokes’ son Ryan Stokes, and owns WesTrac, the Caterpillar excavation and machinery business that is performing strongly on the back of a surging mining industry. It also owns Coates Hire.

Seven Group has entered into an equity swap arrangement with UBS to take its interest in Boral to 19.98 per cent.

In an interview with The Age and The Sydney Morning Herald last month, Ryan Stokes said Seven Group had been watching Boral for about six to 12 months before it began investing in the company earlier this year.

Boral had "uniquely positioned Australian assets", had potential for value to be unlocked, was involved in sectors like infrastructure that could deliver strong growth and had experienced a significantly weakened share price, he said at the time.