Seven West Media chief executive James Warburton will explore a sale of the television and publishing company's production arm, which produces hit shows including My Kitchen Rules and Home and Away.

"We have been fielding inquiries, so we’ve appointed Morgan Stanley to do a strategic review," he told The Sydney Morning Herald and The Age. 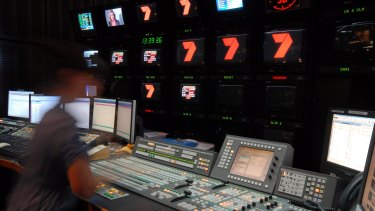 Seven Studios will be a focus for the broader business in the second half.Credit:Bloomberg News

Seven Studios, which is led by Therese Hegarty, creates programs including My Kitchen Rules, A Place to Call Home, Home and Away and Zumbo's Just Desserts, a co-production with Netflix. The studios business also includes Seven Studios UK and 7Beyond in the US, and recently signed a deal with Amazon for a reboot of Packed to the Rafters called Back to the Rafters.

The unit's revenue from program sales and third-party productions rose by 19.6 per cent to $53.2 million in the December half, financial disclosures show.

"We need to have absolute structural separation between the two," he said.

"If you look at the studios business … it makes content for us, but it's making content for third-party providers. It needs capital, so you produce those shows and sell it, so it needs capital from that perspective and in addition to that, it’s a good discussion point in terms of international studios or production houses, but then potentially bringing a [subscription streaming] service in as well."

Seven has been battling a tough advertising market and weak ratings. Shares in the company, which is controlled by billionaire Kerry Stokes, sank 21 per cent to close at a record low of 21¢ on Tuesday.

JPMorgan media analyst Eric Pan said the potential sale of Seven Studios could be a smart move for the company.

"It is interesting they actually broke out expenses for Seven Studios for the first time. That could be a first step to potentially attract suitors, because it looks like a 39 per cent margin business. That is one potential asset they can divest."

Mr Pan said selling off West Australian Newspapers could also be an option for Seven.

Seven has also been looking to outsource more of its programming to external houses such as Endemol Shine. On Tuesday it said it would look to take a further $20 million in costs.