Debt-heavy broadcaster Seven West Media has withdrawn its guidance for 2020 citing a material fall in advertising market activity as a result of the economic impact of the coronavirus.

The media group, chaired by billionaire Kerry Stokes, also cited the suspension or postponement of productions and events – most notably the AFL season and the Australian Olympic Committee's withdrawal from the Tokyo Olympics – when stepping away from the forecasts it gave to shareholders last year. Other productions like the popular Home and Away has also shut down production to protect cast and crew from the spread of COVID-19. 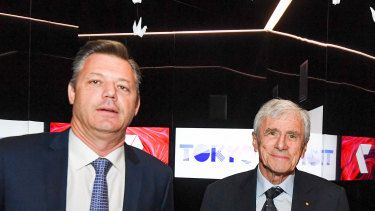 "Such postponements are likely to result in rights payments by Seven West Media being pushed back to reflect the revised scheduling; any adjustments remain subject to negotiation," the company said in a statement.

As The Age and The Sydney Morning Herald has previously revealed, Seven expects to receive some money back if the Olympics are cancelled, however, whether it will receive a return from the AFL over its truncated season is unknown.