Kerry Stokes-controlled Seven West Media has swung to a net profit of $318 million after a better-than-expected advertising market allowed it to reverse impairments on the Tokyo 2020 Olympics and its television licence.

The company reported underlying earnings [before interest, tax, depreciation and amortisation] of $253.9 million for the 2021 financial year, which was at the upper end of guidance outlined in June. Revenue increased 3.5 per cent to $1.3 billion. 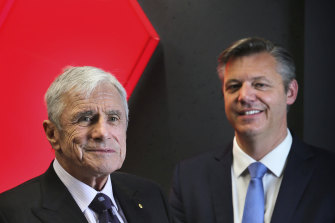 Seven chief executive James Warburton said the results were a reflection of the changes he had made in his two years at the helm.

“Our company has seen many changes over the past 12 months and the results have been very encouraging,” Mr Warburton said. “The improved performance has been driven by the relentless pursuit of the three strategic priorities we introduced in the second half of calendar 2019.

“Those priorities – content-led growth, transformation, and capital structure and M&A – sit at the core of our three-year plan and they remain our focus.”

The improved TV advertising market outlook led to a $208.5 million reversal of an impairment on its TV license and a $20.6 million reversal in an onerous provision put on the Olympics. Net debt was down 40 per cent to $240 million in the financial year. The swing to profit followed a net loss of $163.3 million in the previous year.

A dividend will not be paid to shareholders, despite a positive outlook for the advertising market and bookings from clients. Seven is expecting to grab a 40 per share of broadcast advertising revenue in the first half of the new financial year. It said it intends to renegotiate its deal with the banks before the end of this year as it focuses more broadly on industry consolidation.

“Cost discipline and addressing onerous content contracts are an ongoing focus for us. This year we will also renegotiate our debt facilities to secure an improved financial position,” Mr Warburton said.

“All of this, particularly the improvement in our balance sheet, puts us in an excellent position
to work with new partners and/or towards consolidating the media sector. We are pursuing
several options in these areas.” Mr Warburton made $7.6 million in the last financial year when considering share price growth, deferred performance rights and cash payments. Seven shares closed at 52c on Friday.