Seven West Media under pressure ahead of financial results

Seven West Media won't be relying on fresh capital from major shareholding Seven Group Holdings as it moves into the second half of the financial year.

On Tuesday, Seven will release its first results since the multimillion-dollar restructure announced last October under new chief executive James Warburton. The restructure resulted in about 160 job losses and was expected to save the network more than $20 million. 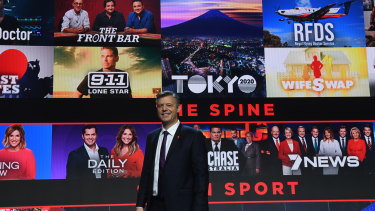 Seven CEO James Warburton will release half-year results this week, his first set since announcing a major restructure of the business.Credit:Peter Braig

Programs including Sunday Night, Today Tonight and Queensland Weekender were among those axed as part of the changes and a new slate was announced at the end of last year. Seven planned to reinvigorate its schedule with the return of Farmer Wants a Wife and Big Brother, as well as new shows including Pooch Perfect and Holy Moley.

The network has had a challenging start to the year with flagship show My Kitchen Rules: The Rivals down by 46 per cent in the ratings compared with last year. Advertising sources said the business was under immense pressure by major brands including lead sponsor Coles to make up for the lost ratings. But Seven has been in active conversations with advertisers, ensuring they get value for money from other programming. Seven sources expect this value to be returned in the first quarter.

Seven is also looking to outsource more of its programming to houses such as Endemol Shine instead of using Seven Studios.

Meanwhile, Seven has already made about $90 million worth of advertising for Tokyo 2020 Olympics, filling 10 out of the 12 sponsorship slots.

UBS forecasts from early February show Seven West Media, Southern Cross Austereo and Here, There & Everywhere all have downside risk. UBS said Nine Entertainment, publisher of this masthead is also at risk, but could partly offset with cost out.

Meanwhile Mr Warburton's other plans to turn around the business, including a merger with Prime Media Group and the sales of magazine operation Pacific, have been stalled.

The merger with Prime Media Group was blocked by media proprietors Antony Catalano and Bruce Gordon, and Seven is still waiting on a decision from the Australian Competition and Consumer Commission on its $35 million deal with Bauer Media for its magazine business, due in April.

With market capitalisation at $384 million and a group net debt of $564 million as of last financial year, the business is now operating in negative equity.

In the past, Seven has relied on capital raising from Seven Group Holdings, which has a 41 per cent stake in the business. For now, at least, Seven West Media is on its own.