THE REMAINS of the oldest meat-eating dinosaur in the world have been discovered in southern Brazil.

The beast is called Gnathovorax cabreirai and it's thought to have lived 230 million years ago when South America was still part of the super-continent called Pangea.

The find has been made even more amazing by the fact the skeleton is virtually intact.

This includes the dinosaurs's razor sharp teeth and jaws that would have made it a "killing machine".

Dr Muller, a biologist at the Federal University of Santa Maria, Brazil, said: "The outstanding skeleton possesses sharp teeth and claws, which may have been used by Gnathovorax to capture its prey.

"Additionally, the exquisitely preserved skeleton allowed us to reconstruct the shape of the brain of the animal – employing CT-scans." 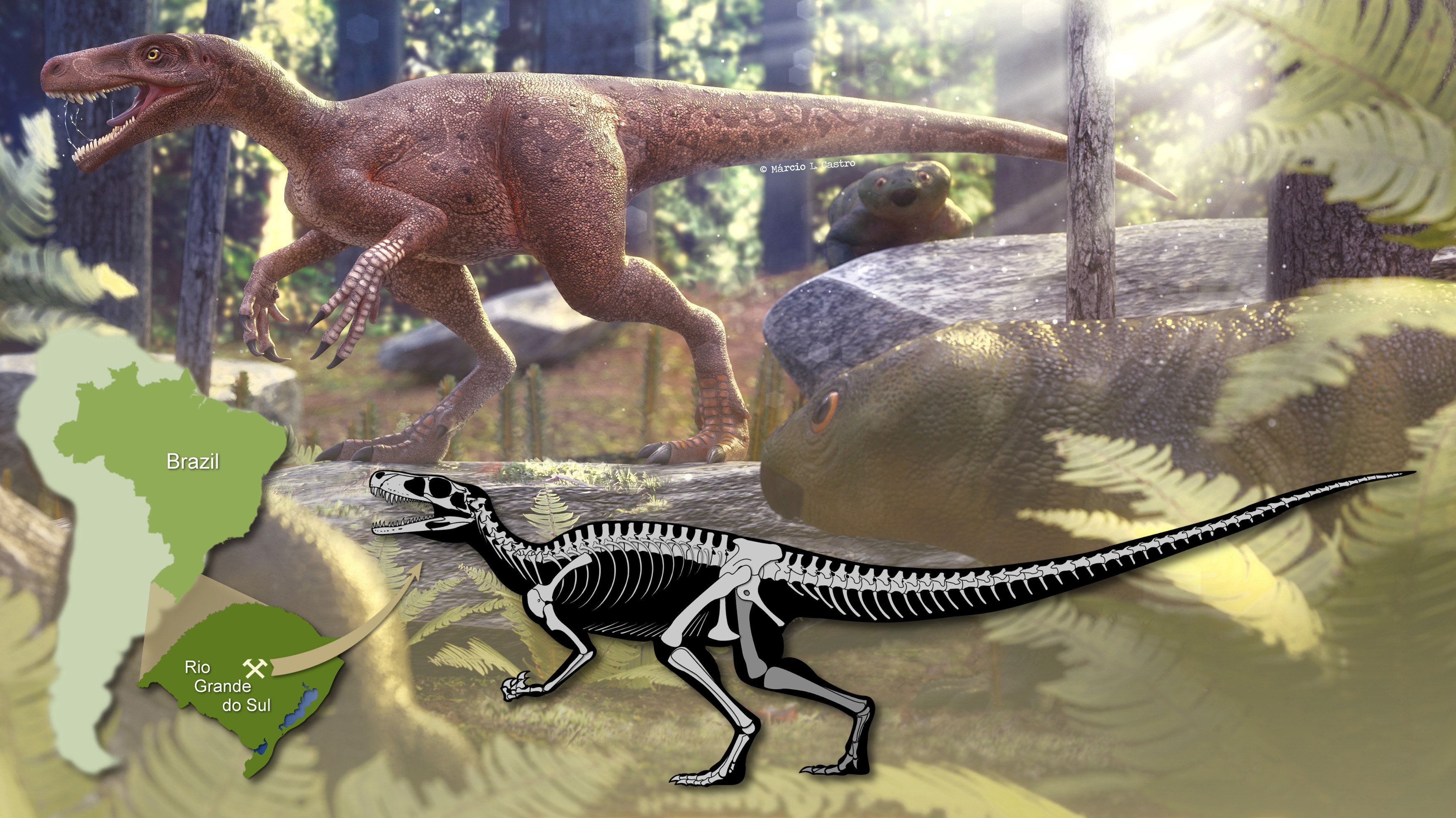 CT scan reconstructions of its brain have indicated that it would have had good eyesight and co-ordination.

The researchers think these features would have put it right at the top of the food chain.

Gnathovorax was about ten feet in length and weighed up to half a ton.

It's the first known carnivorous dinosaur – beating the previous record by more than 30 million years.

Dinosaurs ruled the Earth for most of Mesozoic Era – between about 250 to 65 million years ago. 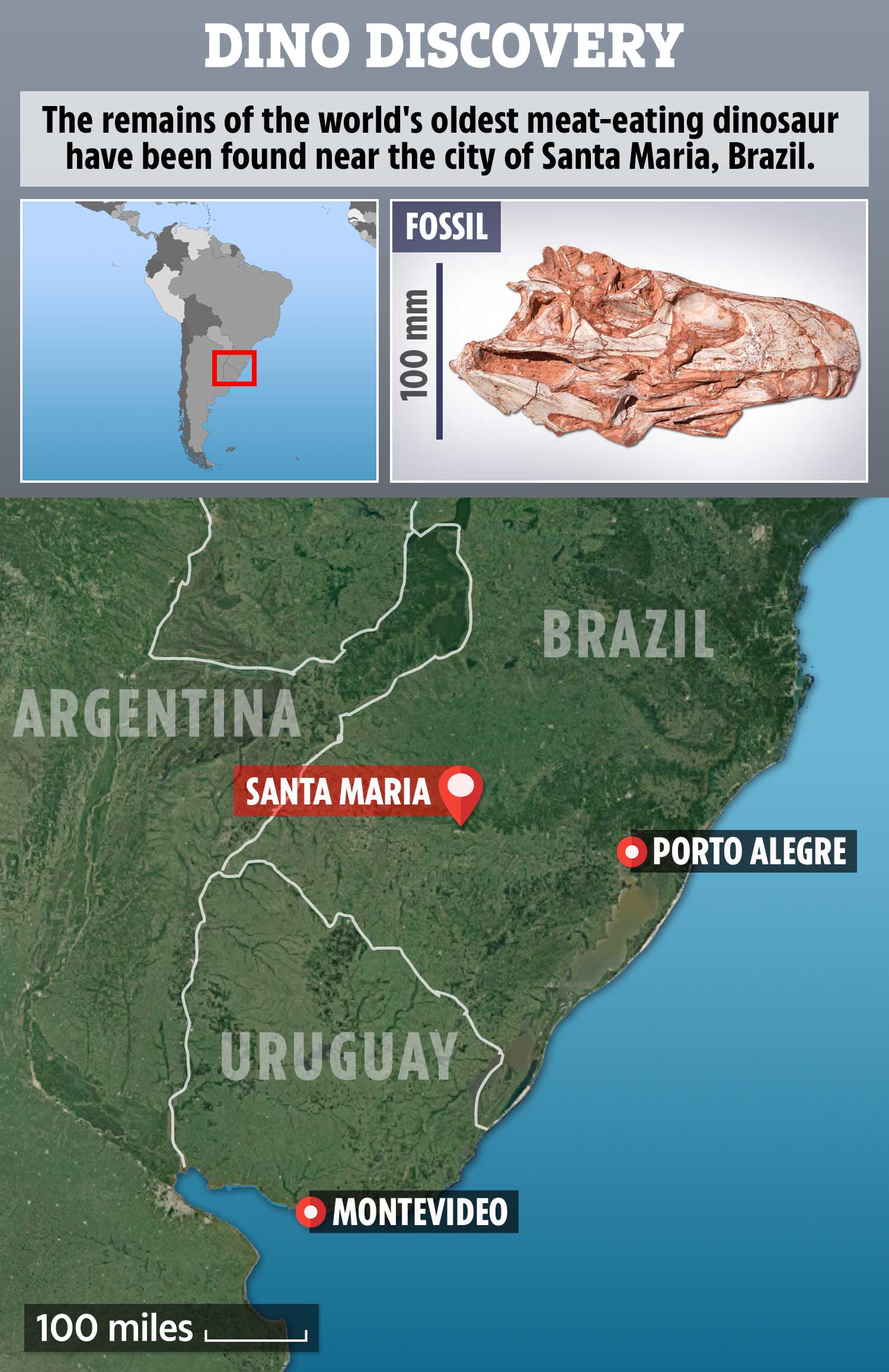 Most of the 'super predators' like Tyrannosaurus rex and Allosaurus lived tens of millions of years later during the Jurassic and Cretaceous.

Dr Muller said: "The oldest predatory dinosaurs – that lived during the Triassic around 230 million years before the present – are, however, still rare findings.

"Gnathovorax cabreirai is represented by an almost complete skeleton excavated in southern Brazil.

"The beast measured about three meters in length and is one of the oldest dinosaurs in the world.

"Moreover, it was one of the largest carnivores of its area 230 million years ago – much before its larger cousins from Jurassic and Cretaceous."

The only other known dinosaurs that date back this far were less than twice the size – barely reaching five feet in length.

It's also thought that the Gnathovorax is an ancestor of the T rex.

Lead author of a study about the creature Dr Cristian Pereira Pacheco, also of the Federal University of Santa Maria, said: "Given its superb state of preservation and completeness, the new specimen sheds light into poorly understood aspects of the herrerasaurid anatomy – including soft tissues."

Why did the dinosaurs die out?

In other archaeology news, a mysterious ape-like species has been unearthed in Germany and it could be the ‘missing link’ in human evolution.

An eerie ancient Egyptian ‘cat mummy’ has been found with five legs and three tails.

And, the face of a 1,000-year-old Viking warrior woman with a gruesome battle wound across her skull has been revealed.

What do you think of this new dinosaur discovery? Let us know in the comments…