Songtradr has completed a $US50 million raising from investors, including musician-turned-tech billionaire Richard White, as it prepares the way for a potential float of the business on the ASX this year.

The company has now raised $US100 million from investors valuing the music royalties and licensing platform at $US300 million. They are backing its plan to become the dominant music licensing platform connecting musicians and their commercial customers in the same way that Spotify dominates the consumer space.

“The B2C [business-to-consumer] industry has woken and completed a transformation in how we now use Spotify and Apple,” said Songtradr founder and chief executive Paul Wiltshire. “The B2B {business-to-business] music industry is going to follow and that’s where we believe we can lead that charge.” 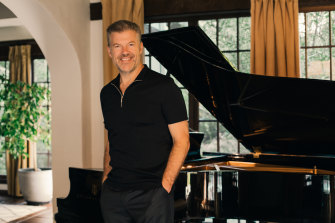 Songtradr CEO Paul Wiltshire is considering plans to list the company on the ASX later this year.

While music streaming giants such as Spotify and Apple have consumers tuned to music streaming, the business side of the industry is still fragmented in terms of tracking royalty income for musicians and licensing their music for commercial use.

Songtradr has built an income base distributing income from royalties for its 600,000-plus artists, as well as licensing music to the advertising, television and film industry with a client list that includes Disney, Netflix, Apple, Coca-Cola, Amazon and Google.

But new sources of income are proliferating as the company matches its artists with social media influencers seeking music to match the content they create on platforms including YouTube, Twitch and TikTok.

“We’re connecting those industries together within our ecosystem,” said Mr Wiltshire.

But for now, it is more traditional royalty payments and licence fees to clients driving the business.

He says the company doubled its revenue in 2020 and is on track to repeat this performance for the 2021 financial year. The company is eyeing a potential float on the ASX to provide more capital for its expansion and acquisition plans to fill out its product offering.

“I think we’re on track to become a public company in the near future,” Mr Wiltshire said.

“At this stage, we’re looking at all opportunities. The second half of this year is possible, and we’re we’re certainly working towards being in a position to do that.”

Investors who showed up for Songtradr’s Series D funding round – typically the last before an IPO – include Regal Funds Management, Aware Super, Perennial Investment, Argo Investments and Greencape. But there is no doubting the value of the other investor who returned for the latest round: WiseTech founder White.

Like Wiltshire, White is a former musician who found his feet in tech.

“He’s our largest investor; he is a incredible mentor and someone you can jam with,” said Mr Wiltshire. “So that’s a really good combination.”

Mr White has been a big fan of acquisitions to secure the dominance of his global logistics software group WiseTech, and he endorsed Songtradr’s use of M&A to help boost its offering. This includes the recent acquisition of creative music agency MassiveMusic; Pretzel, which provides music for livestreamers; and Tunefind, which acts as a music discovery service for TV, film and gaming.

“I believe the company now has the scale, global footprint and talent to accelerate its plan to transform the music industry,” Mr White said.