Global economy will bounce back from coronavirus: Expert

Federated Hermes CIO of Global Affairs Stephen Auth and LM Capital Group LLC’s Luis Maizel agree the market will survive in the long-term, but for now, things are uncertain.

South Korean coronavirus cases jumped again Wednesday and the U.S. military confirmed its first case among American soldiers based in the Asian country, with his case and many others connected to a southeastern city with a growing illness cluster.

South Korea’s Centers for Disease Control and Prevention said 216 of the 284 new cases were in Daegu, where the government has been mobilizing public health tools to contain the spread of the outbreak, and in neighboring towns.

The U.S. military said the 23-year-old soldier was in self-quarantine at his off-base residence. He had been based in Camp Carroll in a town near Daegu, and visited both Carroll and nearby Camp Walker in recent days, according to the statement.

South Korean authorities and U.S. military health professionals were tracing his contacts to determine if other people may have been exposed.

About 28,500 U.S. troops are stationed in South Korea as deterrence against potential aggression from North Korea. United States Forces Korea previously said a widowed dependent had the virus, the first case involving a USFK-related individual. South Korea’s 600,000-member military has reported 18 cases and quarantined thousands of soldiers as a precaution. 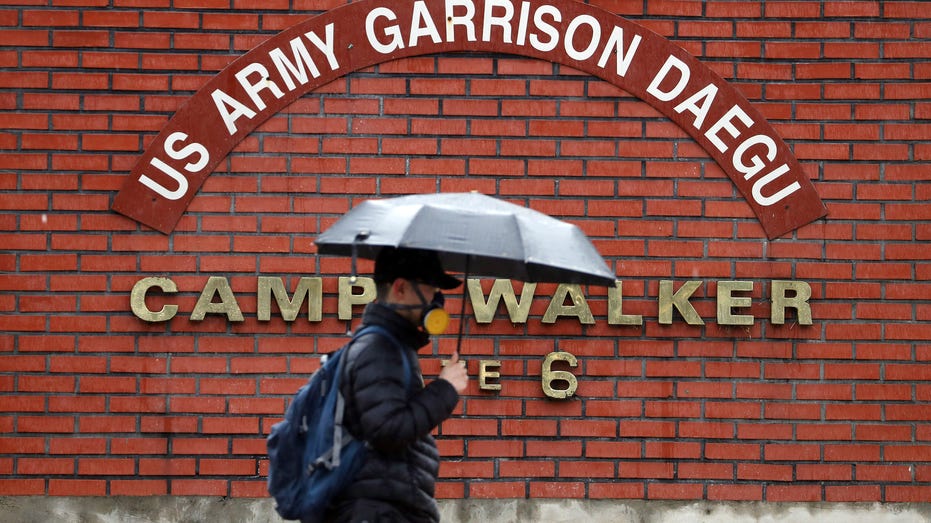 In this Tuesday, Feb. 25, 2020, photo, a man passes by U.S. Army base Camp Walker, in Daegu, South Korea. The U.S. military on Wednesday, Feb. 26, says one of its soldiers based in South Korea tested positive for a new virus, the first U.S. service m

Bowling alleys, movie theaters and a golf course at four U.S. bases were closed after the soldier's case was confirmed, Col. Edward Ballanco, commander of the U.S. Army Garrison Daegu, said. All restaurants at the bases, and at Camp George in Daegu, could now provide only takeout meals with soldiers and family members prohibited from dining there, he said.

"This is a setback, it's true, there's no getting around that, but it's not the end of the war," he said on a video message posted on Facebook.

“We are very well equipped to fight this thing off. I am certain that, that soldier that has tested positive, he's on his way up to Camp Humphreys today, is going to get better medical care than anyone else in Korea who has the coronavirus.”

South Korea now has 1,146 confirmed infections of the virus and 11 fatalities from the COVID-19 illness it causes. The national government has been channeling medical personnel, protective suits and other supplies to Daegu, and there are concerns the local hospitals are being overwhelmed and fatigued doctors are becoming vulnerable to infections. 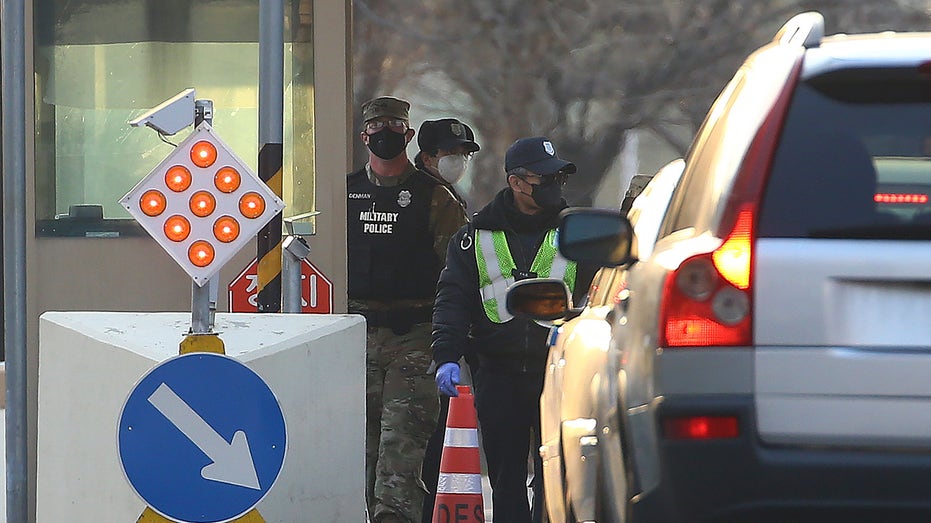 In this Thursday, Feb. 20, 2020 photo, a U.S. military policeman and South Korean security person check visitors at the U.S. Army base Camp Walker, in Daegu, South Korea. The number of new virus cases in South Korea jumped again Wednesday and the fir

“This week will be critical in the fight to combat the illness,” Prime Minister Chung Se-kyun said at a meeting in Daegu City Hall to discuss quarantine efforts.

The number of cases were expected to rise as health workers finish testing hundreds of members of the Daegu branch of a church that has the country's biggest cluster of infections. The Shincheonji Church of Jesus, which mainstream Christian organizations describe as a cult, provided a list of 212,000 members nationwide to government authorities who plan to widen the screening. Vice Health Minister Kim Gang-lip said authorities plan to find and test churchgoers exhibiting symptoms first.

South Korea’s virus patients also include a 25-year-old cabin crew member of Korean Air, the country’s biggest airline, who worked on a flight that departed from Israel and arrived in South Korea on Feb. 16, according to Jung Eun-kyeong, director of the KCDC. The flight also carried a group of tourists, of which 30 have tested positive.

CDC WARNS AMERICANS TO START PREPARING FOR CORONAVIRUS OUTBREAK IN US

China, by far, still has the most cases and deaths from the illness, though its daily increase in cases has slowed recently. Chinese officials Wednesday reported another 406 cases and 52 additional deaths, all of them in hard-hit Hubei province and all but 10 in the epicenter of the city of Wuhan.

China has recorded 2,715 deaths from COVID-19 and 78,064 confirmed cases of the virus on the mainland since the illness emerged in December.

China has put Wuhan and nearby cities under virtual quarantine for weeks, halting nearly all movement except for disease prevention, health care and supplying necessities. It has sent thousands of personnel to build and staff virus-dedicated hospitals in the epicenter region. In the capital Beijing and throughout the country, public events were canceled and factories, offices and schools closed.

Chinese banks have been ordered to disinfect old banknotes before reissuing them to the public. State broadcaster CCTV showed staff of a state-owned bank in Shanghai putting old banknotes under ultraviolet disinfection and putting them into a vault. The bank told CCTV money removed from high-risk sites such as hospitals and markets would not be returned to circulation. Other banknotes will be disinfected and sealed for at least 7 days before being recirculated, the bank said.

Uncertainly remained over how best to stem the spread of the illness. Italy had taken Europe’s most stringent preventative measures and yet became home to the biggest outbreak outside Asia. Experts in Japan acknowledged the mishandling of a virus-stricken cruise ship could have allowed the problem to magnify. 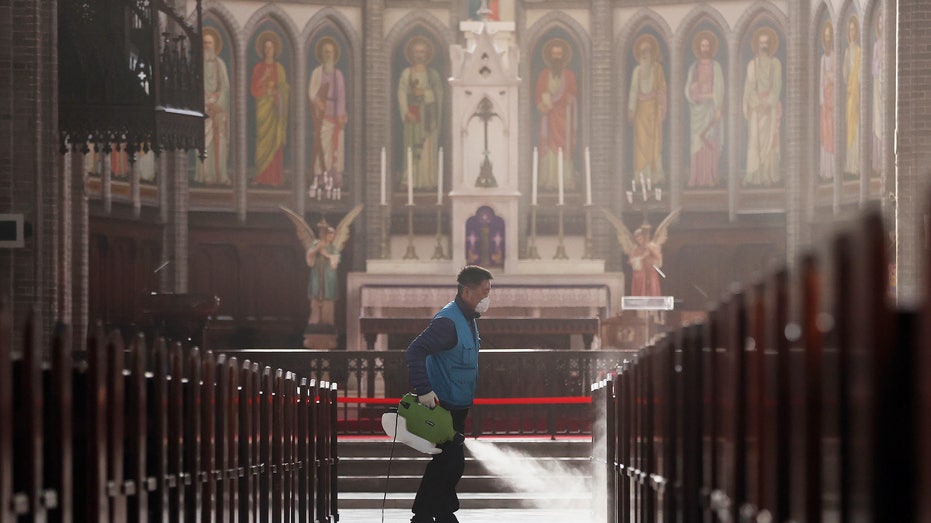 A worker wearing a face mask sprays disinfectant as a precaution against the new coronavirus at Myeongdong Cathedral in Seoul, South Korea, Wednesday, Feb. 26, 2020. The number of new virus infections in South Korea jumped again Wednesday and the U.S

Suga said Pound's opinion does not reflect the official view of the IOC. Suga said the IOC and local organizers are going as planned with the Tokyo Olympics.

Several Middle Eastern countries reported jumps in cases tied to travel from Iran, which has the highest in the Middle East with 95 cases and 15 deaths. Kuwait's KUNA news agency said 12 cases have been confirmed there, and Bahrain's state-run news agency said it had 26 cases.

Japan's total of 861, third highest behind China and South Korea, includes 691 from the Diamond Princess. Four former passengers on the ship have died and more than a dozen people who were evacuated by their home countries later tested positive for the virus. Six government officials involved in the quarantine effort also became sick.

Overnight, 445 Filipinos who were mostly crewmembers on the ship flew home to begin a 14-day quarantine. Eighty Filipinos from the ship have the virus and stayed behind in hospitals in Japan.