South Sydney’s office market is transforming into a green tech hub with a wide range of tenants looking to enter the tightly held precinct that has been called a “key growth corridor”. 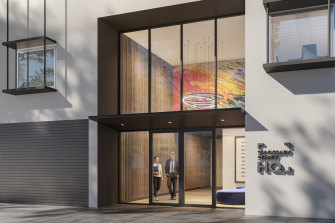 One of the latest sites is the building at 6 Ossary Street and 40 Ricketty Street in Mascot, known as Home HQ, which is owned and developed by Allen Linz’s Rebel Property and joint venture partner Warren Duncan of Everest Property.

It is the area’s first purpose-built office building, and is anchored by energy provider 5B, a global clean technology powerhouse. The development cost was around $50 million for the 5600 square metre site, which has large floor plates of 1500 square metres.

“We are witnessing an evolving precinct benefiting from hundreds of million in green tech investment, and both the developers and tenants, 5B have been instrumental in spearheading this capital injection” Miron Solomons, national director of investment services at Colliers, said.

‘We are witnessing an evolving precinct benefiting from hundreds of millions in green tech investment.’

South Sydney has become increasingly cosmopolitan and has attracted investors including WiseTech owner Richard White, who has plans to develop his site, bordered by Ossary, Kent and Coward Streets and Coggins Place, into a technology park.

“There is significant demand from clean tech businesses to create a hub in the immediate precinct, and some of the biggest developers in both Australia and abroad have answered the call,” Solomons said.

Stanton Hillier Parker’s managing director Evgenikos and senior partner Kruyer said 5B represents the emergence of Mascot as a technology and innovation hub, and that dynamic companies are moving deeper into south Sydney.

“Other key benefits of this asset represent an investment in environmental, social and governance (ESG) behind 5B, potential of rental growth, depreciation benefits, and the ability to add 21 per cent of building area from an approved additional level,” Evgenikos said.

LOGOS and the country’s largest super fund, AustralianSuper, are also looking at plans for the Qantas buildings at Mascot, which they bought for $802 million in October last year.

Under the plans, part of the site will be leased back to the airline while the buyers’ consortium, which also includes the Abu Dhabi Investment Authority, will work with Qantas to look at potential development options for the sites, which could include new green tech tenants.