Minnesota Democratic Rep. Ilhan Omar on Wednesday rejected a Wednesday tweet from Eric Trump, the executive vice president of The Trump Organization, in which he claimed his father, President Trump, won Pennsylvania.

The president is leading in the state by a 4.7% margin with 87% of precincts reporting votes as of Wednesday evening, according to The Associated Press.

"We have won Pennsylvania!" the younger Trump tweeted, to which Omar replied, "You haven’t, sit down and let people do their jobs."

Omar is one of four progressive freshman congresswoman — all of whom were re-elected to serve second terms on Tuesday — including Reps. Alexandria Ocasio-Cortez of New York, Rashida Tlaib of Michigan and Ayanna Pressley of Massachusetts. Ocasio-Cortez condemned President Trump in a Wednesday tweet, saying his "premature claims of victory are illegitimate, dangerous, and authoritarian."

Trump, his sons and White House Press Secretary Kayleigh McEnany all announced on social media an early victory in the battleground state, which will play a large role in determining the final 2020 presidential election winner once all votes are counted, even before any official calls were made. 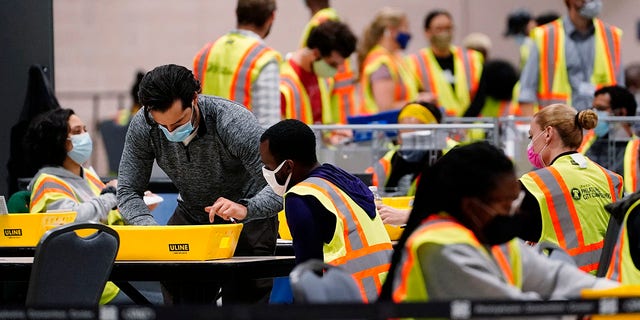 Donald Trump Jr., who also serves as executive vice president of The Trump Organization, said during a Wednesday campaign press conference in Pennsylvania that the Trump campaign declared victory in the state.

"We're up by 400,000 votes with 86% of the precincts [reporting]," Trump Jr. said. "We have Republican votes still coming in from Trump country. And the Democrats know that the only way that they can win this election is to cheat in Pennsylvania. And we've seen it from day one."

The Fox News Decision Desk has yet to make a formal announcement declaring a winner in the state.

Pennsylvania Attorney General Josh Shapiro said during a Wednesday press call that there are "millions of ballots left to be counted" in the state. Allegheny County, Pennsylvania, paused ballot counting on Tuesday evening and reconvened at 10 a.m. on Wednesday, according to local NPR reporter Lucy Perkins.

Perkins said there are still 110,726 ballots left to count in the county at 4 p.m. on Wednesday.

The Trump campaign filed lawsuits Wednesday in Pennsylvania and Michigan, laying the groundwork for contesting the outcome in undecided battlegrounds that could determine whether he gets another four years in the White House.

The Trump campaign also is seeking to intervene in a Pennsylvania case at the Supreme Court that deals with whether ballots received up to three days after the election can be counted, deputy campaign manager Justin Clark said.