Stacey Abrams Has Been Fighting Voter Suppression for Years

Just two years ago, Stacey Abrams lost Georgia’s gubernatorial race to Republican governor Brian Kemp by a margin of less than two percentage points. Her campaign was notable for several reasons—not least of which was its conclusion, during which Abrams suggested that Kemp, who at the time was Georgia’s Secretary of State, had used his position to suppress voting.

“More than 200 years into Georgia’s democratic experiment, the state failed its voters,” Abrams said at an event following the election, per The New York Times. “Let’s be clear—this is not a speech of concession, because concession means to acknowledge an action is right, true or proper.”

As former vice president Joe Biden continues to make gains in Georgia, a traditionally red state that is now a toss-up in the presidential election, praise for Abrams and fellow organizers on the ground in the state who’ve been actively fighting against the country’s legacy of voter suppression has grown. According to the Brennan Center for Justice, at least 17 million voters between 2016 and 2018 were disenfranchised.

Though Abrams’s work since her loss has further exposed how voter suppression precludes millions of Americans from exercising their democratic rights, her investment in the issue and her political organizing began long before that race. As a student at Spelman College, she confronted then Atlanta mayor Maynard Jackson for “not doing enough for young people,” according to The Washington Post, and fought for economic justice for her constituents as a member of the Georgia House of Representatives for the good part of a decade.

“In a democracy, our ability to select those who speak for us comes from the right to vote,” Abrams told Harper’s BAZAAR in the September 2020 issue. “We’ve spent 230 years trying to reclaim the promise that was in our Declaration of Independence, this promise of equality.”

Here’s a rundown of the work Abrams achieved before she became a household name for championing voting rights.

At a protest at the Georgia Capitol, Abrams, at the time a Spelman student, joined in a burning of the state flag, which had a Confederate emblem at the time. Recalling the demonstration in Harper’s BAZAAR‘s September 2020 issue, Abrams said, “And when I burned the Confederate flag, I had a permit for it, but when we burned that flag, it was because I grew up in Mississippi in the shadows of Beauvoir, the last home of Jefferson Davis, where I watched people celebrate a man who tried to keep my people enslaved. And that’s just wrong.”

After graduating from Yale Law School, Abrams worked as a tax attorney, with a particular focus on tax exempt organizations and public finance.

When Abrams was just 29 years old, she was appointed the deputy city attorney of Atlanta. As she told the Post, working in the mayor’s office prepared her to be a public servant, because it allowed her to see how the entire system worked.

Abrams represented the 89th district for the Georgia House of Representatives for a decade. Among her achievements in the role was preventing what would have been the largest tax increase in Georgia history, per TIME magazine, and preserving the Georgia HOPE Scholarship for low-income residents, which was in danger of being slashed. She also worked on criminal justice reform and on Georgia’s largest public transportation funding package before resigning in 2017 before her gubernatorial run. 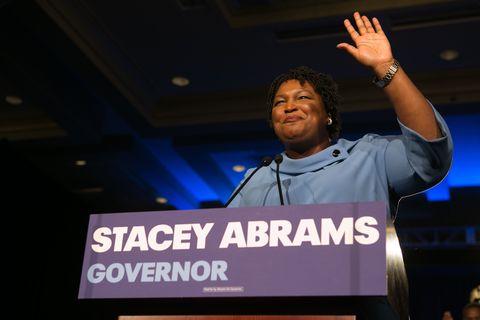 Invigorated by her loss, Abrams founded Fair Fight 2020, an organization that worked to build voter protection teams in multiple states, including Georgia, where President Donald Trump and Biden are currently neck and neck. She also launched the Southern Economic Advancement Project (SEAP), which works on promoting economic prosperity in the region, and Fair Count, an organization whose mission is to ensure that communities of color, rural populations, and other marginalized groups are accurately accounted for in the 2020 Census.

Helming these three organizations has kept Abrams more than busy, and yet, she has nonetheless spent the past year using her platform to speak directly to others against voter suppression. Abrams was one candidate whose name was continuously brought up in conversations regarding who would be Biden’s vice president pick, and though she ultimately did not get chosen for the ticket, Abrams tells Harper’s BAZAAR that she’s not ruling out a presidential run one day.

“I believe in having leadership that is competent and that is careful, that is also courageous. I want to be one of those leaders. But part of leadership is knowing when it’s your time and the best place to do your work,” Abrams says. “When I didn’t become governor, I wasn’t absolved of the responsibility of still doing the work I talked about. So I started Fair Fight, Fair Count, and the Southern Economic Advancement Project to make certain that those of us who live in the South aren’t left behind.”