Labor says Australia needs to urgently review its sports broadcasting rules and has accused the Morrison government of failing to safeguard AFL, NRL, the Olympics and other major sports from being locked behind online streaming giants’ paywalls.

The row over the broadcasting rules has escalated after two of the world’s biggest streaming services – Amazon Prime and Paramount – put their hands up to be part of an AFL broadcasting deal from 2024 onwards. 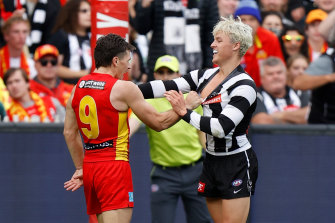 Labor says broadcast rules need to be reviewed to ensure all Australians can watch their favourite sport for free. Credit:Getty Images

Labor’s communications spokeswoman Michelle Rowland said Australians’ free access to major sporting events was in jeopardy and the need to review and reform the “anti-siphoning” laws to reflect the rise of streaming services was “ever more pressing”.

“The stakes are only getting higher, both for industry whose business models rely on sports rights and for consumers, who face rising cost of living pressures and who rely on free-to-air TV, particularly those Australians in the digital divide,” Rowland said.

The government failed to review the regime before it was due to expire last year, she said, and instead “lazily rolled it over without examining fundamental issues around digital rights and platforms”.

Communications Minister Paul Fletcher said the anti-siphoning list would be in place until April 2023, which allowed “ample time to consider whether any changes are required to the scheme”.

“We could easily see a major subscription streaming service buy up exclusive rights to the sporting events that bring us together, like the Olympics, NRL or AFL, and force Australians to pay to watch them,” said Free TV chief executive Bridget Fair.

“What we’ve got is analog legislation in a digital world. The rules urgently need to be updated to protect the access of all Australians to live and free sport.”

Australia’s anti-siphoning laws were introduced in 1992 as Rupert Murdoch launched his pay TV company Foxtel, to ensure the public could watch major sporting and cultural events for free. The legislation stops Foxtel from bidding for broadcast right until a free-to-air network has bought them, but does not apply to online streaming services.

A Foxtel spokesman agreed the regime needed reform, saying it was “anti-competitive, applying to some subscription platforms such as Foxtel but not others, while also providing outdated protections for free-to-air television.”

The debate comes as sports shift online in earnest. Channel Seven’s free-to-air AFL broadcast audience has fallen 18 per cent over the past five years, while Foxtel’s is down 13 per cent. The pay TV provider’s sports streaming service, Kayo, however has attracted over a million paying subscribers.

One senior broadcasting executive, who requested anonymity to discuss sensitive commercial matters, said a company the size of Amazon could “happily wear losses for many years to squash local media before having control over our sport”.

AFL bosses were last week preparing to meet with Amazon, Paramount and the Google-owned YouTube in the US to discuss potential broadcasting deals.

Amazon, which has made AFL documentaries and other sports content key to its local subscription push, secured local broadcast rights to Tokyo Olympics swimming trials last year, and could vie for the right to broadcast the next three Olympics in Australia when it goes to bidding later this year.

The New York-based Paramount owns Australia’s Network Ten and its bid for the AFL is said to involve splitting games across both free-to-air television and its subscription streaming site. Paramount+ already has the rights for A-League soccer.