Social media giant Twitter suspended President Trump's campaign from its platform not long after shutting down his personal account, which had amassed nearly 90 million followers.

The San Francisco-based company permanently banned the president following Wednesday's riot at the Capitol by a pro-Trump mob. It had earlier removed three tweets he posted in response to the violence and then temporarily blocked him over "repeated and severe violations" of its civic integrity policy.

"As we’ve said, using another account to try to evade a suspension is against our rules," a Twitter spokesperson told Fox Business. "We've permanently suspended the @TeamTrump account." 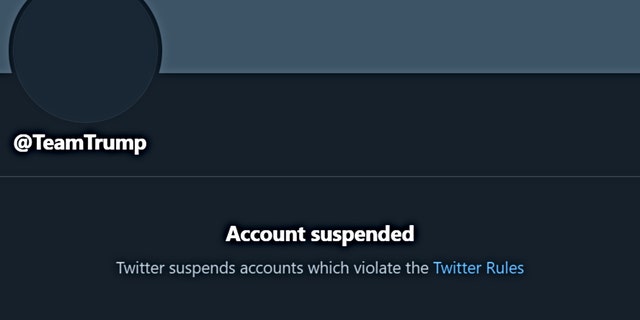 Trump 2020 campaign digital director Gary Coby tweeted to White House Social Media Director Dan Scavino on Friday, saying he could "feel free to use" his Twitter login after the president was banned from the site. Coby was also suspended by Twitter.

The Trump campaign did not immediately respond to an inquiry from Fox News.

The Trump War Room Twitter account, which the campaign manages, tweeted Friday after the account's permanent suspension that Coby had been joking.

"He changed his name and profile pic to mock Twitter after they suspended @TeamTrump for posting the same presidential statement that reporters tweeted from the pool report," Trump War Room tweeted.