One proof of that victory is that it’s hard to define what “technology” even is. Tech is more like a coat of new paint on everything than a definable set of products or industries. Health care is tech. Entertainment is tech. Schools are tech. Money is tech. Transportation is tech. We live through tech.

Technology is also in a liminal phase where the promise of what might be coming next coexists with the complicated reality of what is happening now. 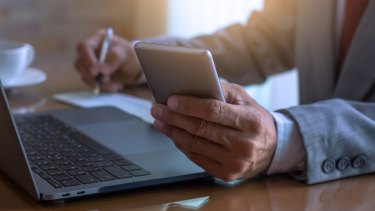 Technology is everywhere. We live through tech.Credit:Shutterstock

We’re grappling with the benefits and the drawbacks of the still relatively recent popularity of smartphones in billions of pockets, online shopping and the social media megaphones that both help us build community and tear us apart. Many people are also leapfrogging ahead to a future in which computers might increasingly predict cancer, beam internet connections from space, control weapons and blur the line between what’s real and virtual.

The “ugh, now what?!” stage of technology is colliding with the “what’s next?!” phase. It’s both exciting and unsettling.

It’s confusing to know how to shape technology that exists today to best serve human needs, and also do the same for an imagined future that may never come. Package deliveries by drone and driverless cars were among the technologies that insiders predicted would be relatively common by now. (They’re still both far from that.) It’s reasonable to expect that some of today’s promised innovations will take a while to go mainstream, if they ever do.

The “ugh, now what?!” stage of technology is colliding with the “what’s next?!” phase. It’s both exciting and unsettling.

What may be most unusual about this “what’s next” moment in technology is that it’s happening relatively out in the open, with billions of people and power brokers watching or involved.

Steve Jobs and Apple dreamed up the first modern smartphone mostly in secret — although, people gossiped about the iPhone long before it was introduced in 2007. Today’s Apple and a zillion other companies are testing driverless cars on public roads and with regulators and the public peering over their shoulders.

This is one example of what happens when technology is no longer confined to shiny gadgets or pixels on a screen. When technology is woven into everything, it doesn’t sneak up on us. Once, perhaps, technology felt like things that magical tech elves invented in their workshops and handed over for humans to adore. No more. Technology is normal, not magic. And — like everything else in the world — it can be good and bad.

That can sometimes feel disappointing, but it’s also healthy. We have all grown a little savvier about the nuanced effects of technology in our lives. Technology is neither the cause of nor the solution to all of life’s problems. (Yes, “Simpsons” nerds, I see you.)

Uber and similar on-demand ride services are handy to both passengers and people who want a flexible job. Those services also helped clog roads despite early promises that they would ease traffic, and might have helped popularise a form of perilous work. Technology in our homes helped us muddle through work, school and a social life during the past couple of years. And yet, it’s so hard to make a stupid printer work.

Technology didn’t cause the coronavirus pandemic, nor did it invent vaccines and distribute them to billions of people. Social media has contributed to social divisions, but it’s just one of the forces of polarisation. Technology is probably not the magical answer to climate change, nor to climbing rates of violence in parts of the US. Technology can assist us in finding the community that we need, but it can’t do the difficult work of sustaining those connections.

I hope that we’ve become sceptical but not cynical about the forces of technology. We can believe that tech can help, and we can also keep in mind that sometimes it can do harm. And sometimes tech doesn’t matter much at all. Technology alone does not change the world. We do.