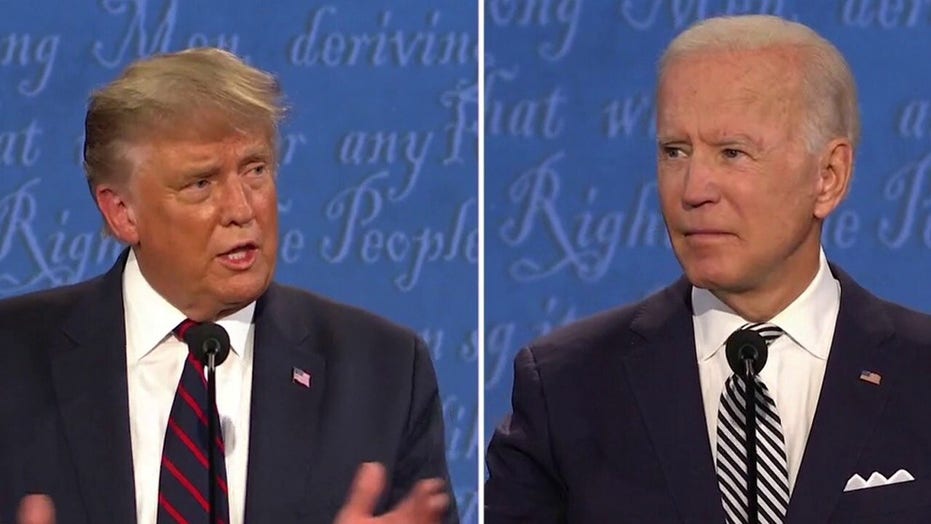 Sen. Ted Cruz, R-Texas, and CNN's Chris Cuomo faced off in a fiery clash on Wednesday night that further escalated when the Republican took a swipe at the anchor's Democratic brother, New York Gov. Andrew Cuomo.

The conversation began with Cuomo pressing Cruz on whether President Trump went "soft" on the far-right group the Proud Boys during Tuesday night's debate. The senator responded by saying he wished Trump was "much clearer" with his denunciation and appreciated the president's sharper condemnation the next day. Cruz quickly called out the press for being "hypocritical" for not condemning Joe Biden's 2010 eulogy for former senator and klansman Robert Byrd.

"Chris, have you ever eulogized a klansman? I haven't," Cruz shot back.

The CNN anchor then invoked "Charlottesville" and "David Duke" as examples he suggested Trump failed to condemn white supremacists and invoked Trump's attacks on Cruz's family during the 2016 election in an attempt to challenge the senator to slam the president.

"What happened to that Ted?" Cuomo asked. "I don't know if [Trump] changed or just you changed for some reason, Senator."

"Chris, there was a time when CNN actually cared about being journalistic and talking about facts. Donald Trump broke you guys," Cruz later slammed Cuomo's network. "I mean, you're entire show, your entire network is just about how much you hate Trump."

The "Cuomo Prime Time" anchor denied that he hates the president, insisting that he "respects him as president" and simply wants "better for this country."

The clash further escalated, however, when the CNN anchor called out the governors of Texas, Florida, and Georgia over their response to the coronavirus pandemic.

"I get that your show wants to attack Texas, and Florida, and Georgia because they have Republican governors. We've also had much, much lower death rates than many other parts of the country," Cruz said, alluding to Democrat-run states. "And it's political, the attacks you're making."

Cuomo slammed Cruz's charge that he's made the subject of the coronavirus "political," highlighting his family's own recovery from the disease.

"Let me say something," Cruz interjected. "There is something disgusting that Democrats are doing, that Joe Biden does, and that you do, which is you try to blame the people who've lost their lives on your political enemies. And that's just not right… It's not right at all and it's particularly not right, Chris, when your brother has presided over the state with the highest death rate in the country."

"New York's record will stand for itself," Cuomo defended his brother.

"I know your brother didn't want those people to lose their lives but you shouldn't play politics," Cruz continued.

"Oh, that's good. So you don't think he intentionally killed them. That's good. That's very charitable of you," Cuomo knocked the senator.

"Of course not!" Cruz exclaimed. "We could have a very reasonable policy discussion about the policy mistakes in New York, New Jersey of sending COVID-positive patients into nursing homes and I think that was a very serious policy mistake."

"Mhm, because that didn't happen all over the country, right?" Cuomo said.

"My brother was the first one to say that there was a learning curve and that mistakes were made and they changed things as soon as they could," Cuomo said.

"Then don't be a hypocrite about it," the senator fired back on the anchor's double standard on governors' handling of the pandemic, later asking Cuomo, "Does it trouble you at all that New York and New Jersey had the highest death rates?"

"Of course! It all troubles me, Ted!" Cuomo shouted. "And to watch guys like you stand by and stroke your beard like a wise man instead of telling the president to get on it when you have power-"

"How about you tell your brother to get on it!" Cruz erupted.

"My brother will stand for his own record!" Cuomo exclaimed. "Why don't you talk to the president the way that you talk to my brother, Ted? You afraid of him? You think he'll smack you down at home? Is that what it is like the way he shut you up in the primary?"

The clash quickly moved towards President Trump's travel ban on China with Cuomo denying Cruz's correct assertion that the former VP condemned Trump's actions as xenophobic at the time, telling the senator he'd bet him "dinner" that he was wrong.

Both Cuomo and CNN had long been criticized for going months without offering critical coverage of Gov. Cuomo's controversial nursing home policy, particularly when the anchor hosted the brother on his show nearly a dozen times and largely avoided the subject.