Texas Right to Life has website shut down by GoDaddy

The Bellaire, Texas, Police Department is investigating threats against Texas Right to Life after police dispatched a bomb squad to the scene Friday amid multiple online and voicemail threats wishing rape and death on the pro-life employees at the organization in the wake of Texas’ abortion law.

“We take these kind of threats very seriously,” Bellaire Chief of Police Onesimo Lopez told Fox News on Sunday. “Our Criminal Investigations Division is conducting an investigation into the threats and will follow up on any leads that develop.”

“No other information is available at this time,” Lopez added.

The Bellaire Police Department sent out a bomb squad to investigate a suspicious package at Texas Right to Life on Friday after the pro-life group had received multiple threats, Fox 4 News reported. Local police evacuated the building and brought in the Houston police bomb squad to examine the package, which turned out not to contain an explosive device.

Bellaire police confiscated the package and warned the public that making a bomb threat is a criminal offense. Individuals convicted of a “Terroristic Threat” face a fine of up to $4,000 and nearly a year in jail.

“We take all of these threats very seriously,” Kimberlyn Schwartz, director of media and communication at Texas Right to Life, told Fox News in an interview on Sunday. “We report all of them to the local police.” 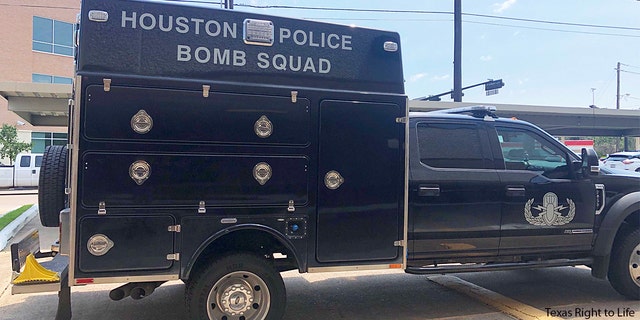 She said Texas Right to Life has received more threats after the implementation of S.B.8, the Texas abortion law that enables private citizens to bring a civil lawsuit against an abortionist, or someone who aids and abets abortion, if the abortion provider detected the unborn baby’s heartbeat before carrying out the procedure, or if they refuse to check for a heartbeat after roughly six weeks’ gestation. Many abortion activists have condemned the law as effectively overturning the 1973 Roe v. Wade decision, since many women often do not realize they are pregnant until they pass six weeks’ gestation.

Schwartz said that the pro-life group has hired 24-7 security at the office and set up cameras to monitor the building. She added that Texas Right to Life staff have altered their daily routines to enhance security.

“It’s definitely taken a physical and emotional toll on a lot of us – especially in the very beginning of these really serious threats – to where we would fear for the safety of ourselves and our homes and our children,” the spokeswoman added. “It definitely has made an impact on us personally.”

“It’s been heartbreaking to see the violence that people can have in their hearts,” Schwartz said. She noted that Texas Right to Life has “always” condemned threats against workers at abortion clinics, which she also described as “heartbreaking.”

On September 7 at 9:34pm, one user submitted a “patient advocacy request” with a direct bomb threat. In the “additional notes” section of the request, the user wrote, “There’s a bomb being sent through the mail from Portland. You should heed this warning as your only notice. Enjoy the following five days.”

A user on social media sent Texas Right to Life a message with a “short tutorial on how to tie a noose,” encouraging staffers to “please follow the instructions, procure a noose, stick your neck in the hole, and then let your body dangle by the neck.”

“I do hope you get your dues soon, scum of the earth,” the user added, before identifying herself as “someone who gives a s*** about women.”

One email – with the subject line “BURN IN HELL B****ES” – added the ominous message, “tick tock.”

Another email – with the subject line “your wonderful new law” – wished death on the entire organization. “I hope whoever reads this and everybody who works there dies a painful death, asap. Have a nice day, scum,” the sender wrote.

Some callers attacked the pro-life activists as “child molesters” and “pedophiles.”

Other voicemail messages insulted the Christian faith (Texas Right to Life is a Christian organization, although Schwartz noted that many non-Christians also oppose abortion for scientific and moral reasons).

“Guess what, sweetie, the Lord isn’t going to f**king save you because there isn’t one. Because Jesus wasn’t White, the apostles weren’t White, the Bible has been rewritten so many f**king times… Jesus is a figment of your f**king imagination,” one caller yelled. “Don’t push your f**king bullsh** religion on us, on the rest of us. … You’re a f**king cult.”

When Fox News asked Schwartz which of the messages shocked her most, she said, “The ones about eating babies were the most horrific.”

Another caller spoke about “pickling” babies and eating them with “chili pepper” because, “I love Satan so much.”

Schwartz attributed the threats to desperation among pro-abortion activists. She noted that abortion clinics have temporarily halted abortions in Texas so as to avoid liability under S.B.8.

Schwartz attributed the attacks to a form of “spiritual warfare.” She said that despite the disgusting and terrifying messages, “We’re not deterred. We have faith in God. We believe that our work is for the kingdom of God. I think that God has been preparing us for this for a long time.”

Despite all the negative messages, Schwartz also said the pro-life group has received an outpouring of support, with people “stepping up and offering to help, with prayers or donations or volunteering.”