The billion-dollar implosion behind Milklab, your barista’s favourite almond milk

They’re the slick orange-and-white cartons that have become a mainstay in Australian coffee culture. Championed by baristas, chosen by McDonald’s, Starbucks and Muffin Break, and beloved by lactose-avoiding consumers, Milklab’s plant-based products are a common sight in cafes across the nation.

But few coffee drinkers would know that Milklab’s manufacturer is at the centre of one of the most spectacular corporate implosions in recent Australian history. 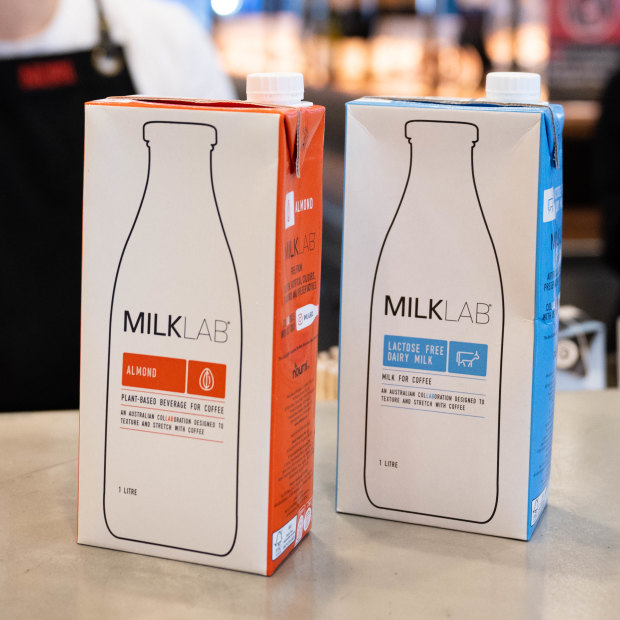 The future of cult favourite MILKLAB is in the hands of a Noumi shareholder vote on Tuesday.Credit:Janie Barrett/SMH

Milklab’s maker, an ASX-listed company once known as Freedom Foods, is still struggling to recover from revelations two years ago of significant accounting irregularities worth over half-a-billion dollars.

The irregularities, preceded by the sudden resignations of two top executives, forced the company into a nine-month trading halt. Two class action lawsuits and an investigation by the corporate regulator, ASIC, have followed.

Freedom Foods has changed its management team, secured support from a new cornerstone shareholder – the billionaire Perich family, one of western Sydney’s biggest landowners – and rebranded itself as Noumi (pronounced “new me”).

Despite this, the company behind a wide range of dairy and plant-based milk products and health supplements has failed to win back the trust of investors.

“Noumi was a ‘market darling’ as recently as a few years ago,” class action law firm Phi Finney McDonald associate Muhammad Arayne says. “The financial irregularity revelations made in mid to late 2020 genuinely shocked the market and caused the company to lose a substantial amount of trust from investors. The share price collapse … was catastrophic.”

Noumi shares, currently hovering around 28 cents, are about 90 per cent below a September 2018 peak price of $5.30. With a market value of $78 million, Noumi is worth less than 5 per cent of a company once valued at nearly $2 billion.

Throughout this turmoil, Milklab has been one bright spot for the company, enjoying stratospheric growth and strong customer loyalty among baristas.

But now, even Noumi’s most prized brand, and the company’s future prospects, are hanging on a knife’s edge.

And this week, the company disclosed that a separate legal battle has been launched by French tea and coffee company Sunday Collab over rights to distribute Milklab in Europe.

Noumi had already been accused of fraud by its former supplier, Californian almond grower Blue Diamond, which sued Noumi for breaching a licensing agreement between the two parties relating to Milklab.

The pair of companies have reached a settlement of $US35 million ($49 million) – more than the embattled Noumi can afford. So to pay it all off, Noumi wants to sell its stake in a separate company – but this needs shareholder approval.

The future of Milklab rests in the hands of these shareholders, who will vote on whether to approve the stake’s sale at an extraordinary general meeting on Wednesday.

The first sign something was wrong at Freedom Foods came on Tuesday, June 23, 2020, when then chief financial officer Campbell Nicholas suddenly resigned. 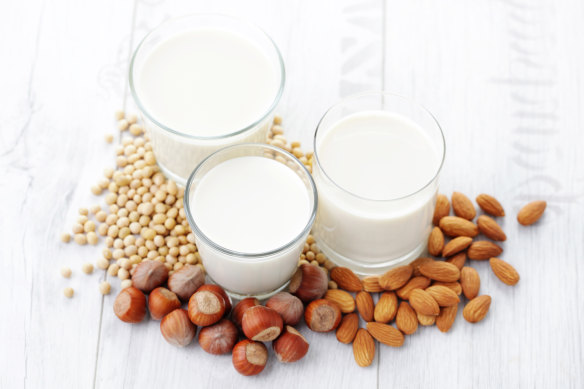 Milklab has seen success amid the booming popularity in non-dairy milk drinks.Credit:TRIBUNE

The following morning, CEO Rory Macleod went on leave. Trading on the ASX was suspended, pending a further announcement, but not before shares dropped to a five-year low. An unusually high volume of 21.5 million shares traded hands (there have been no allegations of insider trading).

Then on Thursday of that week, the company released a statement to the ASX revealing that its estimated value of useless assets, $25 million, had blown out to $60 million. A review of inventory levels showed there was more out-of-date stock, some from cancelled orders, than originally thought. Sixty-one staff positions were made redundant.

Almost simultaneously, the company held a conference call. With the CFO and CEO gone, the unenviable task of hosting it fell to then-chairman Perry Gunner.

The most pressing question from investors and stakeholders was: where did things go wrong? The outdated stock and cancelled orders went as far back as 2017. Why wasn’t it picked up earlier?

The company had been shifting stock from five external warehouses into its own facility, the chairman explained that. They knew there was “some amount” of stock that needed to be reworked (for instance, turned into dry powder) but didn’t realise just how much there was.

Over the years, vast amounts of milk had been going off in warehouses, and either no one had noticed or no one had reported it.

But getting rid of it was expensive. Simply put, there was so much milk that had gone off that it was cheaper to write it off than to rework it.

“The difficulty is the cost of getting that milk out of the packages and into a vat … to allow it to be processed, does not justify the protein or the value of the milk powder that you would obtain from doing it,” he said, according to transcripts of the investor call. “That’s why the … likely provision has been increased from $25 million to $60 million.”

Gunner was pressed by investors on why the company hadn’t identified issues of such a scale with its inventory during a regular stocktake, and whether the company suspected fraud.

His answers did little to defuse the investor unease.

The revelations seemed as startling to him as they were for everyone else.

“This has only come to the attention of the board today effectively,” said Gunner. “We’ve still got a lot of further investigation to undertake.”

The trading halt in late June 2020 that was only supposed to last for a fortnight was extended until October 30, and then again. By the time trading eventually resumed in March 2021, the company was nearly unrecognisable.

The wealthy Perich family – and Freedom Foods’ key backer, owning 52.5 per cent of company shares – stepped in to play a central role in the company’s reformation.

Michael Perich, then a director at his family’s Leppington Pastoral Company, was installed as chief executive in August 2020. Billionaire brothers Tony and Ron Perich were already serving as board directors. The family committed $126 million, through their investment vehicle Arrovest, to turn the company around after negotiations with a hedge fund fell through. 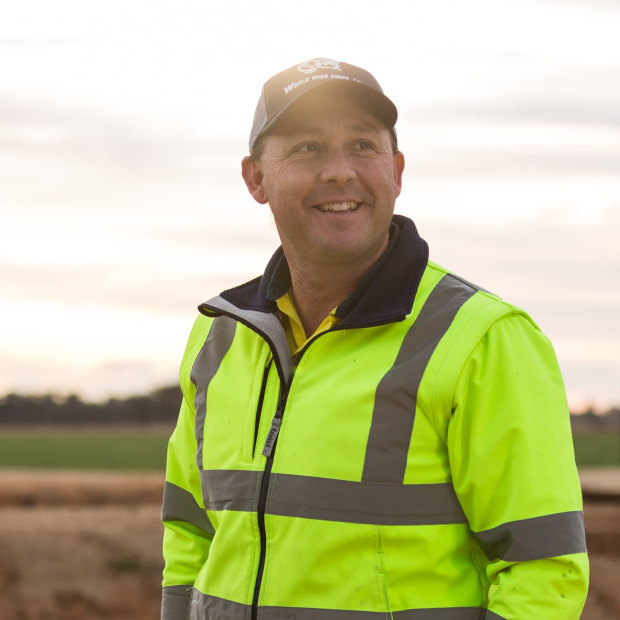 But the worst was yet to come. In its 2020 full-year results released on November 30 of that year, Freedom Foods redid several years of accounting that laid bare the magnitude of just how badly the company had miscalculated.

The revision of the $25 million provisions to $60 million, which had been shocking enough, wasn’t even close: the real figure was $590 million. The $11.6 million in reported profits for the 2019 financial year swung to steep losses just shy of $146 million. Freedom Foods handed over documents to ASIC for an investigation that is still ongoing. No individuals have been identified as being under investigation.

The company had hit rock bottom. Having been installed as CEO, Michael Perich declared a transformation was under way at Freedom Foods. It would become a simpler business by identifying and selling off unprofitable divisions and reducing product lines.

Among all of this, Milklab was an enduring beacon of good news, with sales growth of 73 per cent in 2020. The product is now sold in more than 20 countries and the company relies on the popularity of plant-based milk to drive revenue growth.

But the dispute with US almond supplier Blue Diamond that began over unpaid invoices continued to simmer away in the background. In September 2020, Blue Diamond sued Freedom Foods over its production of Milklab and other brands such as Australia’s Own, arguing it was fraud and a breach of their agreement.

The two class actions, which have been merged into one proceeding, allege that investors bought shares at inflated prices because the company overstated its financial position. The class action also seeks to prosecute Deloitte, arguing it shares some responsibility for signing off on numbers that turned out to be wildly inaccurate. 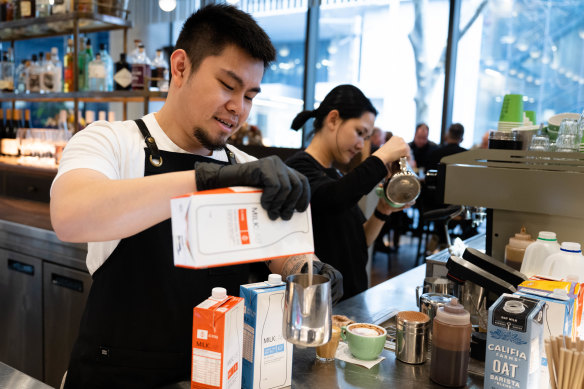 “Investors wanted to know how a company like Noumi allowed accounting irregularities of this magnitude to arise and why Deloitte, as its ‘big 4’ auditor, did not pick up on these issues,” Arayne told this masthead.

At the following annual general meeting in January 2021, Gunner (who was retiring as chairman) and Perich outlined a commitment to transform company culture. Their comments suggested the company’s failings may have been the result of rapid, unchecked growth and lack of accountability at senior levels of the company.

“I have worked with the board to instil and embed a culture within Freedom Foods where policies and procedures are applied uniformly, all employees are treated with respect and our workforce is united,” said Perich.

The company sold its cereals and snacks division, including the Messy Monkeys and Freedom brands in mid-December 2020. In November 2021, and with shareholders’ approval, it changed its name to Noumi.

What’s at stake? Everything

Noumi declined to make Perich available for an interview, citing its media blackout period ahead of earnings results later this month.

The litigation woes have continued. On Thursday evening this week, Noumi disclosed that Sunday Collab is alleging it broke an agreement for the French company to distribute Milklab in Europe and is suing for around €17 million ($24.64 million) in what it says is lost profits. Noumi says the claims are “without merit” and “wholly unsupportable”, and will defend the action. 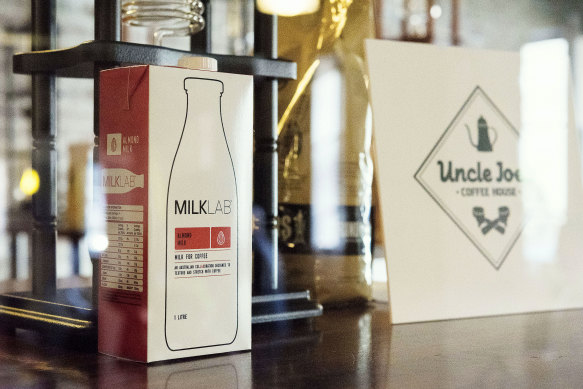 The future of iconic plant-based milk brand Milklab is in the hands of manufacturer Noumi’s shareholders.Credit:Christopher Pearce

With more than half-a-billion dollars in write-downs, two class actions, a countersuit and now a fresh legal battle to contend with, the outstanding $US18 million owed to Blue Diamond is weighing heavily on the business. The debt ($25.4 million) is equivalent to a third of the company’s total value.

Options are few. Shareholders are being asked to give their blessing for Noumi to sell its 9.4 per cent stake in Australian Fresh Milk Holdings (AFMH) for $28.6 million to the Perich family’s Leppington Pastoral Company.

Shareholders will most likely approve of the stake’s sale. But if they don’t, it won’t just be Milklab’s future in doubt.

“The company [will have to] explore other ways to satisfy its obligations under the $US18 million bank guarantee facility, including funding the payment obligations out of operating cash flow,” wrote Noumi chair Genevieve Gregor in a letter to shareholders.

“This would reduce the amount of the company’s available liquidity and may constrain the company’s ability to fund the transformation and growth initiatives previously outlined to shareholders.”

Noumi shareholders will convene to vote at the extraordinary general meeting on Wednesday 10am (AEST).