Nautilus CEO Jim Barr knows his company is considered a bit antiquated to most.

Until recently, the exercise equipment manufacturer was best known for its brands like Bowflex — long synonymous with 1980s and 1990s exercise culture and chock full of colorful bodysuits and leg warmers. Now, Barr is doing everything in his power to bring the company into the digital age of fitness.

Nautilus, which in addition to Bowflex also owns and operates Schwinn, Universal, and its namesake Nautilus brand, has doubled down on digital in the past two years to catch up with the rapidly evolving industry.

Beyond taking on emerging digital players, Nautilus is looking to get an edge over fitness equipment competitors like Precor, Life Fitness, and NordicTrack to capture a larger piece of the growing market. According to Allied Market Research, the fitness equipment industry was valued at $11.5 billion in 2019 and is expected to reach $15.2 billion by 2027.

Barr said Nautilus started its digital fitness expansion by prioritizing the development of its digital subscription service JRNY, as well as the creation of its own connected fitness products. The latter includes smart machines like bicycles, treadmills, and weight lifting systems.

More recently, Nautilus debuted the Bowflex VeloCore stationary bicycle, designed to rival Peloton with a swiveling seat that allows for a wider range of motion to help target the abdominals. With pricing starting at $1,699, the bike is also slightly cheaper than Peloton’s $1,895. Meanwhile, an older model, the Bowflex C6, retails for $999.

“[These products] really helped Nautilus become a more digital brand,” Barr told Insider. “That was one of the issues, that we were viewed as the old school equipment provider, whose job was done when we shipped the machines to the customer. But with connected fitness, we have an ongoing ability to motivate people every day.”

Barr, who previously served in digitally-focused roles at Sears and OfficeMax, said investing in connected fitness has been his most pressing task since taking over at the helm of Nautilus in 2019. For Barr, this has meant making sweeping changes across the company, including selling off its commercial business and bringing in new talent in order to make “a more digital version” of Nautilus.

“In a nutshell, one of the things we’ve done is focused,” he said. “We sold our commercial business. We’re focusing at at-home only. We’ve skinned down our portfolio and reduced SKUs.”

Barr’s investments in digital are quickly paying off, particularly during the pandemic as demand for at-home fitness options began to skyrocket. In its most recent quarter, Nautilus reported a year-over-year net sales increase of 152% to $155 million — the most profitable quarter in the company’s 40-year history. 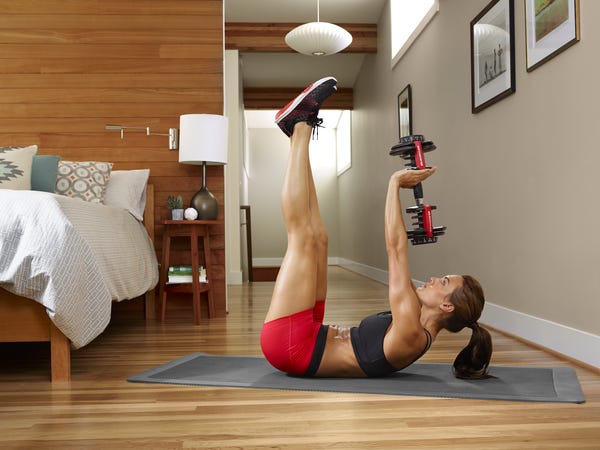 The ‘freedom’ of working out at home

According to Barr, moving into connected fitness has “profoundly changed” the company’s business model, not only by establishing it as more of a consumer-facing household name, but by forming a long-term relationship with its customers from which to continue to capitalize on.

“Now [selling the product is] just the beginning of our relationship,” he said. “We ship a product and get it installed, then we get them working out on it and we know what they do every day. We know they’re not using it as a coat hanger, we’re seeing how often they’re working out, we have a role in their motivation through JRNY. It’s a way to become more connected to customers and that’s really enriching our employee experiences as a company.”

Nautilus uses real-time data from JRNY — which features curated workout classes and entertainment options alongside personalized coaching features for $19.99 a month — to inform the type of fitness content it serves out to its users.

When it comes to instructor-led content, however, Barr said the company is “still behind on that” and is working to build out the platform. Nautilus may have work to do on its subscription product, but it has experienced continued success in its strength training products, a category that remains in high demand and with limited competitors during the pandemic.

“We’ve not been able to keep them in stock,” Barr said when discussing his company’s strength-training products. “We had a waiting list hundreds of thousands of people long. We finally caught up, but still, you have to wait another three months or so to get these things, and we’re making them as fast as we can.”

Still, Barr said Nautilus was able to increase its stationary bicycle production fivefold, despite operating on an “asset-light model,” by which, he means the company does not own its own factories. Instead, the company has developed “long-term relationships with a handful of really high quality suppliers” that Barr said have “responded beautifully” despite pandemic-related challenges.

Looking ahead, Barr said he anticipates the at-home and connected fitness business is here to stay and will continue to thrive long after the pandemic.

“What we’ve really seen so far is a complete resurgence of at-home,” he said. “I think people intuitively knew the convenience of working out at home, but in this forced trial, if we want to think about the pandemic that way, they rediscovered how great it is and how convenient it is to be at home and to work out and to have the freedom to do it when you want and not have to travel anywhere.”