In the days after Eric Logan, a 54-year-old African American man, was shot and killed by a police officer in South Bend, Indiana, last summer, it became clear the city’s law enforcement policies had failed.

The police officer who killed Logan was wearing a body camera, an initiative instituted under then-Mayor Pete Buttigieg. But the camera was off. The city’s policy didn’t specifically mandate officers turn their cameras on. Immediately after, the city issued a clarification: Officers should turn the cameras on during all “work-related interactions.”

Any day now, the city will hear from the special prosecutor appointed to investigate the shooting whether the officer, who has since resigned, will face charges.

The unusually long investigation has frustrated the South Bend community. South Bend residents might not have had to wait nine months for answers if the officer’s body camera had been on.

Why it wasn’t can in part be traced back to Lexipol, a California-based for-profit contractor that has shaped how small and midsize cities like South Bend conduct law enforcement. The company offers prewritten police manuals, which are the main way cities legally regulate police behavior on the ground. Lexipol has a reputation for pushing back against stricter policing standards in its manuals, whether around body cameras or when it’s appropriate for officers to use force.

South Bend contracted with Lexipol in 2015, paying $94,770 for a rewrite of its police manual. Buttigieg’s presidential campaign platform is progressive on policing; it calls for raising the legal standards for officers to justify using lethal force in favor of deescalation policies and supporting departments that emphasize community involvement in policing. But his vision for policing in America isn’t in line with what happened in South Bend.

When Buttigieg has had to answer for his record on policing and race relations, he has emphasized a number of initiatives: an online “transparency hub” that allows anyone to go through police recruitment data and police incidents; implicit bias and deescalation trainings; and his push to update the policies guiding law enforcement in South Bend ― with the help of Lexipol.

Rewriting the police manual was done largely outside the eye of the community, and it was done in a manner that resulted in what Buttigieg’s presidential platform might call “a lack of substantive guidance” for police officers — policy gaps that sowed distrust in the community before and after Logan’s death.

Founded by former law enforcement officers turned attorneys, Lexipol has opposed mandatory deescalation policies, stricter standards for the use of force, prohibitions against shooting at moving vehicles, and it has drafted policies deliberately vague enough to give officers as much discretion as possible under the legal statutes.

“Lexipol comes to the task of drafting police manuals and policies with a specific mindset and political orientation,” said Carl Takei, an attorney with the American Civil Liberties Union who has been litigating policing practices — specifically around Lexipol policies on immigration that the ACLU alleges are unconstitutional. “The way they market themselves to small or medium size cities like South Bend is that if you adopt our policies, our policies will protect you from liability.”

Lexipol has policy templates that cities take on and shape to their needs. In South Bend, the language stayed largely unchanged, with some minor tweaks. Takei, who reviewed South Bend’s policies around the use of force and body cameras, said they were in line with what the company has done for thousands of other jurisdictions across the country.

On the use of force, which Takei described as a “typical example of the Lexipol philosophy,” the South Bend policy “restates the bare minimum constitutional standard for use of force, and then offer[s] a laundry list of nonbinding considerations, rather than to set bright-line rules.”

For example, the policy says that an officer can use force to defend against “what he/she reasonably believes would be an imminent threat of death or serious bodily injury” and later notes that “imminent does not mean immediate or instantaneous.”

Asked why Buttigieg’s campaign platform is different than the policies Buttigieg enacted as mayor, his campaign cited restrictive Indiana laws.

“Indiana law has prevented Pete from making progressive reforms on issues ranging from gun safety to enacting a more restrictive standard on the use of force,” campaign spokesperson Sean Savett told HuffPost. “However, Pete believes that police departments in Indiana and across the country must do more to emphasize deescalation policies.”

Indiana law states that an officer “is justified in using reasonable force if the officer reasonably believes that the force is necessary to effect a lawful arrest,” and has “probable cause” to use force. That language doesn’t prevent a city from going further, Takei said. But that is how the city’s lawyers interpreted the law. The city emphasized the series of training programs on deescalation tactics and implicit bias that the police force also underwent, and were implemented under Buttigieg’s direction.

How Lexipol came to South Bend is a story that’s played out around the country; the city needed to update a policy manual that hadn’t been touched in several decades. While Lexipol is little known to the American public, its services are widely used by cities like South Bend that may not have the resources to dedicate to policy writing. South Bend’s police chief was familiar with the group, and Lexipol offered the city a discount if it contracted with the company for both the fire department and police department manuals. The city council, which allocated the budget for the rewrite, wasn’t involved in how it would be done. 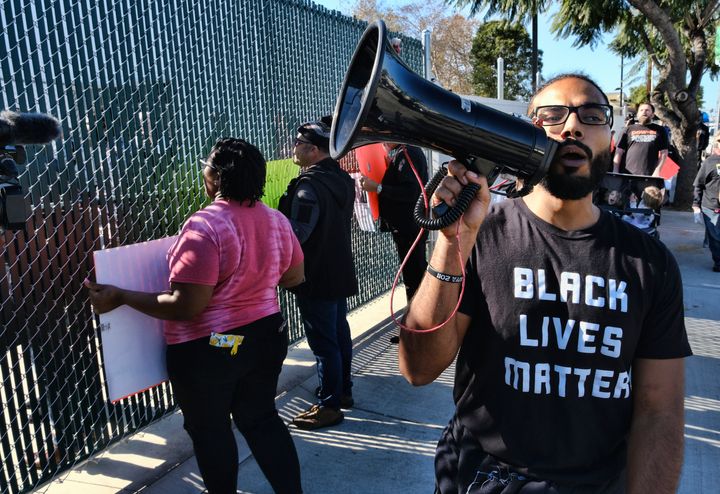 “I didn’t have any company in mind. The only thing I knew was the body cameras should record. I was very basic ― we sent a very basic charge out to leadership,” said Oliver Davis, who was the longest serving African American man on the city’s Common Council and who has endorsed Joe Biden for president. “We needed to get something on the books. There was a tremendous lack of trust in the police in our area because of the police tapes,” he added, referencing Buttigieg’s decision to ask for the resignation of South Bend’s first black police chief after learning he was involved in secretly recording police officers allegedly engaging in unethical behavior.

When Logan was shot, Davis said he recalled thinking, “Well, the police body cameras will show what really happened.”

“To find out the body cameras weren’t on was a major setback,” Davis said.

Other leaders in the city recall a higher level of concern about the contract. Henry Davis Jr., a South Bend city councilman who unsuccessfully ran against Buttigieg for mayor in 2015 and remains a vocal critic of Buttigieg’s record in the city, said he remembered community leaders expressing concern. Davis wasn’t on the city council when the contract with Lexipol went through, but was personally opposed to it.

“We have enough qualified officers locally to develop policies and procedures locally,” Henry Davis said. “We have enough human capital here locally. We have one of the leaders in higher education in our backyard. How do we miss all of our local talent and a university when it’s time to develop a policy to keep people safe. We passed 100,000 people and Notre Dame’s campus to go find somebody who doesn’t have any information about South Bend.”

Buttigieg’s fiercest detractors called it a lack of “vision.”

“Pete had no vision on the police,” said Derek Dieter, a retired South Bend police officer and city council member who is running for a local county commissioner position as a Republican. Dieter, a Trump supporter, has publicly attacked Buttigieg’s presidential run on Tucker Carlson’s Fox News show and called on him to resign as mayor. “You wouldn’t have to go hire a firm that would love to make money off of this thing. You can talk to other police departments. But that’s his M.O.; it’s always been, ‘Let’s hire some outside consultant that doesn’t know anything about South Bend, Indiana.’”

Lexipol would not comment on its methods of drafting policy for South Bend, and whether it worked with community leaders. In a statement to HuffPost, Bill McAuliffe, the director of professional services for Lexipol and a former law enforcement officer, said the company does “not provide boilerplate policy; rather, each law enforcement agency needs to take the next step and review and customize the policies to make sure they’re applicable, practical and functional for the agency and the community.”

It has also pushed back against the notion that it writes policies to prevent lawsuits.

“It’s not about, ‘Hey, Chief, we can keep you from getting sued,’” McAuliffe previously told Newsy about Lexipol’s practices. “It’s, ‘No, hey, Chief, we can help you have solid policy, help you train your people so that they’re treating your citizenry properly, the way you want them to be treated, the way they deserve to be treated. And therefore, if they’re treating them properly and within the law and everything else, then you’re not going to get sued.’”

But according to a study in the Texas Law Review by UCLA law professors Ingrid Eagly and Joanna Schwartz, what is known about Lexipol’s process and policies is not consistent with the evidence-based consensus on policing.

“Lexipol’s approach to police policymaking diverges in several significant ways from that long advocated by scholars and experts,” they wrote. “Commentators have viewed police policies as a tool to constrain officer discretion and to improve officer decisionmaking. Lexipol, in contrast, promotes its policies as a risk management tool that can reduce legal liability.”

Buttigieg took action in the months after Logan’s death to open the city’s policing guidelines to public scrutiny. He briefly left the campaign trail to support the creation of Community Action Group meetings, of which here have been eight, and give residents the opportunity to offer recommendations to improve policing practices.

“It was good to be able to talk through those subject matters,” Scott said. “It was a shame that it took Eric Logan’s death for there to be that kind of input.”

Focused on his presidential run, Buttigieg has reflected on his record on policing in South Bend as a work in progress.

“I don’t think all of these issues are things that somebody can just claim to have solved,” Buttigieg said in an interview with CNN’s Don Lemon in June 2019. “The issues that I haven’t solved as a mayor are issues that America hasn’t solved, that no city has solved, but where we’ve made progress.”