The National Labor Relations Board is releasing a long-awaited rule that will make it harder for workers in fast food and other industries to bargain collectively, delivering another win for employers and a setback to worker groups.

The regulation will limit the scenarios under which corporations are considered “joint employers” alongside other companies they have a relationship with. For example, McDonald’s would likely not qualify as a joint employer with its franchisees, making it tougher for workers at different franchised restaurants to join together as employees of McDonald’s.

The new rule reverses a determination made five years ago, when the board had a majority of Democrats and tended to rule in favor of workers.

The previous, looser definition of joint employment had infuriated the fast-food industry because it put companies like McDonald’s and Burger King potentially on the hook for labor violations in franchised restaurants. It also opened the door to workers across entire brands coming together to improve their working conditions and possibly unionize.

The joint employer rule extends well beyond the fast-food industry, however, touching any company that may rely on contractors or temporary workers in the modern economy. The new definition is a blow to advocates arguing for more corporate accountability in the “fissured workplace,” where it can be confusing who is really the boss: the franchisee or the big fast-food brand, the temp firm or the manufacturer that contracts with it.

The NLRB said it would release the final rule on Wednesday. In order to qualify as a joint employer, the board said, a company must “possess and exercise substantial direct and immediate control” over the terms of employment. John Ring, the board’s chairman, said in a statement that the new rule would bring “clarity, stability, and predictability.” 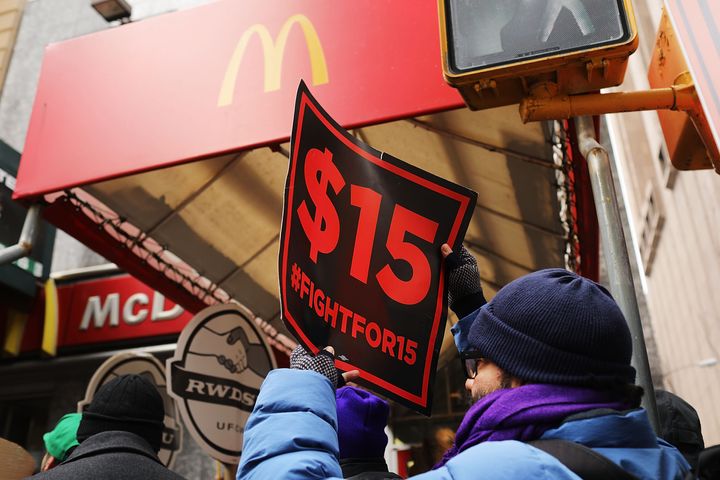 Employer groups and Republicans are applauding the change, maintaining that the Obama-era reading of the law was an overreach. But the left-leaning Economic Policy Institute said the new rule would help companies “avoid responsibility and liability” by shifting it onto others, and suppress wages by making it nearly impossible for certain workforces to form unions.

In one of the biggest NLRB cases in years, the board began a trial in 2015 to determine whether McDonald’s should be considered a joint employer. The case stemmed from a slew of complaints filed by workers affiliated with the Fight for $15, who claimed McDonald’s, and not just franchisees, had retaliated against them for union organizing. While worker advocates hoped for a big ruling against McDonald’s, the case is now pending a settlement.

The Fight for $15 released a statement Wednesday attributed to Jennifer Berry, a McDonald’s worker in Milwaukee, who said the Trump administration is “doing McDonald’s bidding.”

“But workers like me know who our boss is: McDonald’s,” Berry said. “We wear the company’s uniform, serve its Big Macs and fries and help make its billions in profits possible.”

It became fairly clear the board would reverse the earlier standard after President Donald Trump installed a Senate-confirmed, conservative majority at the NLRB. The new board has tried to gut several high-profile, union-friendly precedents, including one that deemed many graduate students employees eligible to unionize.

The board chose to change the joint employment standard through the rule-making process, rather than a decision in a particular case, probably because one Republican member, William Emanuel, was found to have a conflict of interest in the issue due to his former clients. The NLRB’s inspector general determined Emanuel had violated his ethics pledge by not recusing himself from a joint employer case.

The new rule is not the first time Trump appointees have chipped away at the concept of joint employment. As HuffPost reported last month, the Labor Department also tightened up its definition of a joint employer, making it harder for workers to sue in large groups over wage theft.

Related posts:
Hot News
Joe Biden Wins the Indiana Primary: Campaign Update
Gilead developing inhaled remdesivir usable outside of hospitals
Stunning concept video shows off 'iPhone 12' in navy blue MONTHS ahead of rumoured release
NYPD Failed to Control Crime Monday, Cuomo Says: Protest Update
Pentagon Distances Its Leaders From Trump’s Threat to Use Military
They Are Who We Thought They Were
WGN America Announces Team Of Anchors, Correspondents For News Nation
Recent Posts
This website uses cookies to improve your user experience and to provide you with advertisements that are relevant to your interests. By continuing to browse the site you are agreeing to our use of cookies.Ok