The unlikely media experiment that helped save grassroots rugby

On a mutual friend's boat in 2013, an unlikely duo met and formed plans to revive grassroots rugby.

John Murray, a stockbroker and president of Easts Rugby Club had recently bought an old caravan, filled it with Blackmagic digital devices and started streaming much loved but forgotten Shute Shield club rugby games on the internet. Murray was interested in streaming, and wanted to combine it with his love of sport. He had a sublicensing agreement in place with the ABC, which at the time broadcast a Shute Shield game each week on free-to-air. 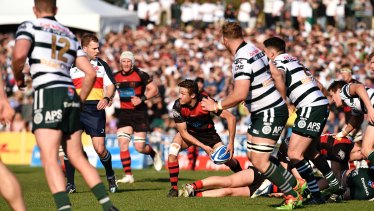 Nobody thought it was a good idea until the day he met Fordham, the well known chief executive of media, sport and entertainment management agency The Fordham Company, who himself was fascinated with the idea of collapsing broadcasting costs.

Soon after, in response to a funding dispute with the government, the ABC would pull the Shute Shield from airwaves after more than 50 years. Murray and Fordham formed a plan. In a boardroom with NSW Rugby, they eventually made a bid for the Shute Shield TV rights.

Buying the rights to The Shute Shield was personal for Fordham. His father, John Fordham, founder of The Fordham Company, was previously a manager of Gordon Rugby Club.

The pair, who said production companies were also interested in the rights, said their offer to back the deal financially made a big difference. “We would underwrite it ourselves and I knew that I could bring in sponsors, I could lean on my corporate contacts,” Fordham says.

On the condition the sport would remain on free-to-air television, the deal was agreed unanimously by the presidents of the Sydney Rugby Union. The grassroots clubs would pay $300,000 annually to Fordham and Murray's company Club Rugby TV to broadcast The Shute Shield for the next 10 years.

But the deal was struck without a free-to-air broadcasting partner. Fordham and Murray were in discussions with Seven West Media, but because the season was about to begin and the deal was done at the eleventh hour, no contracts had been signed and no naming rights sponsor had been lined up.

“We obviously had the money locked from the New South Wales and Sydney Rugby Union, which was probably a quarter of the overall production budget. We had to underwrite three-quarters of a million to a million dollars that week… my dad was laughing,” Fordham says. “We had to sign the network deal before we had the naming rights.”

“He said ‘I need a sign sprayed on the field every game’.. Yep, no problem," Murray says. "The final thing was 'what about a jumping castle branded IntrustSuper in the camera'. Nick and I looked at each other and said 'absolutely no problem'.

“We were innovative and entrepreneurial and we called in a lot of favours and we aligned a lot of our media contacts,” Fordham says. “We landed a deal with oOh! Media's Brendon Cook, who is a mate of ours. He loves grassroots and he said 'we will give you $750,000 of distress space.' We did a deal with Nova and supported Alan Jones and supported The Daily Telegraph. We started to get momentum. But probably the big breakthrough was the 2016 grand final.”

After years of the grand final being played at Concord, Fordham and Murray lobbied successfully to move the match to North Sydney Oval.

“Each grand final, out of our own money, we dropped about $40,000 to $50,000,” Fordham says. “We paid for the helicopter to fly the Shield in, marching bands, bagpipers, face painters. We built…a corporate hospitality thing, we called it the Sky Lounge, which had about 300 people. We served great beer, we had it fully catered."

The sponsors kept coming in. “I don't think Fujitsu or Canon have ever sponsored rugby ever,” Murray says. "As a testament to their relationship with Nick, they got on board."

Attendance also started to improve, with the help of the Fordham family black book. Peter FitzSimons and wife Lisa Wilkinson started turning up in the sponsors' tent, often broadcasting their attendance on social media. Over the course of two years, Fordham's commercial spit and polish had restored some glamour to the heartland competition. In 2017 and 2018, when outsiders Northern Suburbs and Warringah tore down decades of Sydney University dominance, fans were refused entry at the gates of North Sydney Oval.

Despite the buzz around club rugby, OzTAM data shows the competition’s television audience actually dropped year on year over its five years on Seven, apart from a small spike in 2016. The figures do not account for replays, Foxtel's audience or viewers on Seven's online service, 7Plus.

What Raelene Castle has been able to do by aligning the rights is to heal the game. People will be stunned at how quickly rugby recovers

Fordham attributed the decline to accessibility issues."We care about the ratings, but I'd rather sacrifice TV audience and have thousands of people attending games … After the Rio Olympics, 7TWO went off the satellite. 7TWO was on the satellite in 2015 and 2016 and at the end of 2016 it came off the satellite," Fordham says, referencing a move that meant Foxtel customers could no longer access 7TWO.

"In 2018, Fox Sports started replaying our game, that sort of doubled our audience overnight. We were then back to the right numbers and that’s where we got to the end of these five years … and [when we] started having talks with Rugby Australia, we knew it needed to grow."

By the end of last year, Fordham and Murray sensed it was time to get out. Their involvement had restored some lustre to the Shute Shield but the $300,000 pay-to-play fee was wearing thin with the club presidents and administrators further up the food chain at Rugby Australia and NSW Rugby, who footed a portion of the bill in every year of the decade-long deal.

Playing out at the same time was the five-yearly broadcast rights dance between RA and Foxtel. The Shute Shield was suddenly a valuable building block in RA boss Raelene Castle's strategy for rebuilding the game. When Castle let Foxtel know the organisation was going to court its competitors for a better offer on rugby's next five-year deal, Foxtel moved in with a brazen play for the Shute Shield.

The battle for Sydney Rugby Union votes lasted months and held up the billion-dollar rights deal in play between rugby nations Australia, New Zealand, South Africa and Argentina. Two weeks ago Castle won with unanimous votes from the SRU and NSW Rugby.

Sources close to the deal said Fordham and Murray will get more than $100,000 each per year, and will advise the sport where needed. Meanwhile, Seven has been paid $250,000 upfront by Rugby Australia and will receive the rest of the money, about $1.2 million in contra – or advertising spend – until the deal expires in four years' time. Fordham and Murray expect the sponsors of the competition and staff of Club Rugby TV to be involved despite the change.

But Murray says the most important part of the $3.7 million deal with Rugby Australia is the attempt by chief executive Castle to "heal the game".

“The code has been at war with itself for a long time where the club and grassroots rugby felt very disaffected from the administration of rugby at a national and even at a state level,” Murray says. "What Raelene Castle has been able to do by aligning the rights is to heal the game. People will be stunned at how quickly rugby recovers."

Broadcasters, streaming services and telecommunications providers were all given non-disclosure agreements on Friday, and will sign these papers should they choose to proceed with Rugby Australia's official tender process. Ten, Seven, Foxtel and Optus are all expected to enter the formal process. As they hand over the rights, Fordham says the greatest achievement has been giving the clubs much-needed funding.