Far-right leaders across the globe are responding to the historic coronavirus pandemic with an alarming mix of lies, incompetence, racism and corruption.

Among them is U.S. President Donald Trump, who has repeatedly sought to downplay the severity of the virus, and to obscure all the ways his administration has fumbled the federal government’s response.

Ruth Ben-Ghiat is a history professor at New York University who is a world-renowned expert on fascism and propaganda. She talked to HuffPost Wednesday about the grave dangers of having an authoritarian leader like Trump in charge of America’s effort to beat back the pandemic.

Not only will the president continue to put so many lives at risk, she argued, but he will seek to exploit the crisis to gain more power.

On Tuesday, you tweeted something about Trump that struck me. You wrote: “An amoral authoritarian does not care about human lives, I cannot emphasize this enough, only profit and loyalty and obedience matter to him. The politics of revenge and spite will continue.” And I was honestly just hoping you could expand on that for a minute.

For the general public, it can be hard to accept that we have a very different kind of leader. We have a leader who has an authoritarian mentality, and that kind of leader, they’re often narcissistic, they are amoral, totally immoral, only power and profit matters. It’s very much the end justifies the means. So they think in the aggregate, and they really don’t care about human life. So, this is the worst type of leader to have in a crisis because they’re incapable of acting for the public good. So that’s one part of it.

Another part is, Trump is the foe of expertise and science and any kind of fact that gets in the way of what he wants reality to be, and we’ve seen this with abundance in the way he handled the growing crisis of coronavirus. So he would rather send misinformation to the public — which he did recently recommending [drugs] that I understand put some people in the hospital — than tell the truth. And so the broader thing is that authoritarians, they fear transparency and they fear accountability, and this is another reason why they are terrible leaders to have in crises. 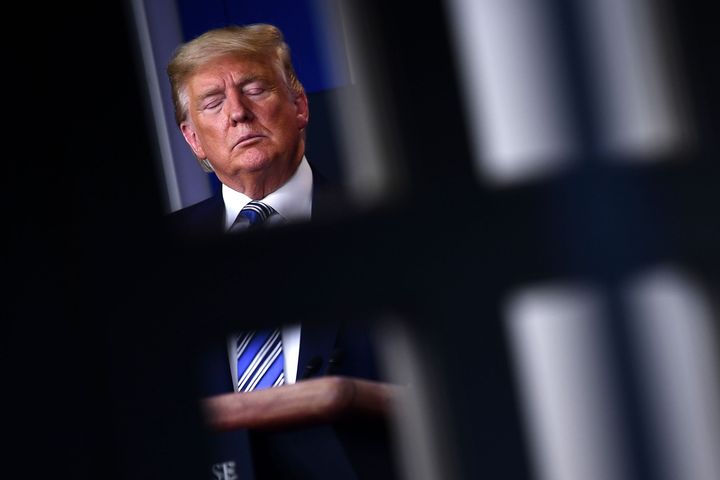 And another thing is that they are corrupt to the core and so they will make a profit off of any kind of crisis. And we saw this, you know, well it’s not clear to me what’s going on behind the scenes, there was already some talk of involving a company that is partly owned by [White House adviser and Trump’s son-in-law Jared] Kushner’s brother. And then the bailout plan that [Sec. of Treasury Steve] Mnuchin presented that was first rejected by the Democrats contains provisions that could, you know, help Trump’s businesses, so this is another example of the lack of the public good.

And historically what happened was very tragic. When authoritarians get into a crisis, for example, during World War II, Mussolini and Hitler were in a losing war which they started, they abandoned their people completely. Mussolini never bothered to have adequate anti-air defenses. And they retreated from the public and they were nonresponsive. And Hitler went into his bunker in the end, and actually said that Germany should just perish. They blame the people for the consequences of their own decisions, because they despise their people. This is the secret. They actively despise and scorn their people. So all of this adds up to a really dire picture if you are unlucky enough to have this kind of ruler when you have a crisis.

I’m doing fact-checking [for her forthcoming book “Strongmen: How They Rise, Why They Succeed, How They Fall”] and going through the book … it’s just terrifying because Trump meets every criterion for this type of personality … So it’s been really weird to be going over the book one last time in this situation.

For people that maybe don’t know maybe the strictest definition of authoritarian, what criteria does he meet?

The amoral: only caring about himself and about having more power and more money. The being corrupt, so that you hire your family who are your co-conspirators and you have the opposite of transparency. You have what’s called an inner sanctum, where you have loyalists. There’s this demand for loyalty and the humiliation of everyone around you to make sure they stay loyal. And then there’s the compulsion to lie. The inability to trust experts or to take counsel from anyone. To think you’re always right. I could go on.

You mentioned that Mussolini, during the Great Depression, employed a lot of censorship. But that’s not necessarily what we’re seeing now. But what are we seeing now, when it comes to, you know, information?

We’re seeing disinformation. Trump is very uncomfortable with people who are giving blunt information, like [Director of the National Institute of Allergy and Infectious Diseases Dr. Anthony] Fauci. He says he’s too blunt. And very quickly the coronavirus task force doesn’t have experts who are not loyalists on it. Like the Surgeon General is there, but he’s a loyalist and he himself is very unhelpful. So you are seeing censorship, you’re seeing false information distributed. You’re seeing manipulation of information. When Trump says, “Well, we want to go back to work in two weeks, and that will be fine, and we’ll crowd the churches for Easter?” This is denial of reality. So we’re seeing all of the tactics that the new authoritarians use. 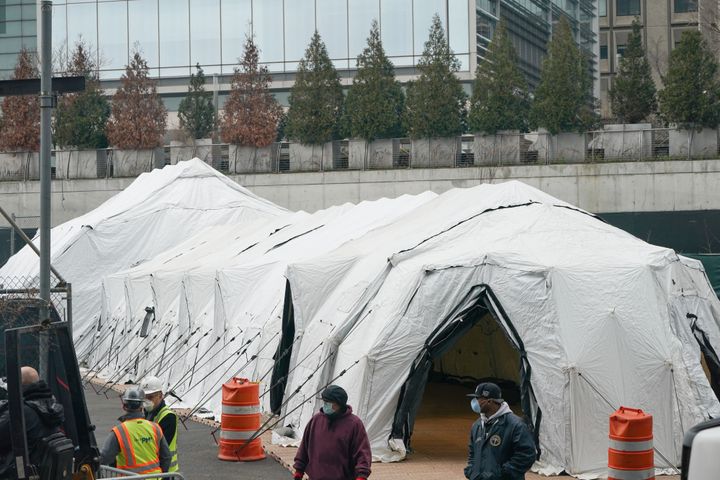 There was a poll this week showing Trump’s approval numbers going up. Historically, you know, what’s the breaking point for the followers of authoritarian leaders? Like, what does it take for them to abandon those leaders?

So his numbers may be going up now, but that’s because more and more people have not gotten sick yet … And historically, you need to get to very dire straits, very dire circumstances before people will give up their cult of the leader.

It takes until you and your family are personally seeing with your own eyes the devastation, the mistakes of the leader and his inadequacy, and his incompetence, and it has to hit very close to home for that to happen with people who have been indoctrinated. But it does happen. It does happen.

That’s why, sooner or later, not that many of these leaders die in office. Most of them are forced into exile or they go out in a violent manner.

Yea. It strikes me that the story you were talking about yesterday about the couple that took the drugs that Trump had recommended. One of them died and the wife basically said, like, “We were listening to the president. Please, no one listen to him anymore.” So it kind of took, like, her own husband dying to like break the spell.

And one conclusion I reached, you know, it’s very important to publicize, to use people who have been indoctrinated and then have come out of it, to use them, to try to present them to people as proof. Yeah, like people, there’s this guy, you must know him, Christian …

Yeah, he’s in your beat. He’s extremist too. So, yeah, giving exposure to those people is really important because they have credibility, because they were part of the cult, whereas somebody like me, or you know, they’ll just say, “Oh, she’s another radical leftist. I don’t believe her to begin with. She works for CNN.” But the other people have more credibility. It’s all very sad.

At this point, if things get as bad as we think they’re going to get, do you foresee Trump being stronger or weaker by this November?

Well, unfortunately there’s a chance that he will do what his buddy [Prime Minister Benjamin] Netanyahu did in Israel, which was to use the coronavirus as an excuse for a power grab. He didn’t suspend Parliament, but he did, like, a purge. The Guardian has an article on it. And [Prime Minister Victor] Orban in Hungary is trying to rule through decree with the excuse being the coronavirus.

So there’s a chance that he would use … growing unrest. We had the lovely news that [Attorney General] William Barr wants to ask Congress to detain people without trial indefinitely, so that’s a total authoritarian move. So, depending on how the economy goes, and if there’s social unrest, you could see a crackdown.

We could see the delay of elections. It’s hard to predict what would happen. And … if he finds that he’s losing support — we’re only in March, let’s say in July or August, there’s mass death, and people have turned against him, even from his core — he would certainly do a power grab to avoid losing. I have zero doubt. Whether he will, I don’t know. But he would.

Because I guess the final point I’d make is that these guys are so corrupt that they have to stay in power to avoid prosecution. And to keep their kleptocracy going. And that’s why, he has a really nice system there, he makes money off of being president and so Ivanka and Jared and the more people bought into it, the more incentive there is to stay.

Speaking of social unrest, you can’t really protest during the pandemic.

No, you can’t have mass protests.

Yeah. So I guess, what kind of guidance does history offer us in ways of responding to authoritarian leaders during a crisis like this?

Well, I don’t think we’ve had a crisis like this in a democracy. We’re seeing, Netanyahu is an example, that’s a democracy, although he’s been eating away at it for a long time. And now he does this power grab. But some of the things that are most effective historically, like sustained mass protests, like people out there, you know, every weekend, that is harder in the States because it’s not like Hong Kong, where there’s one center. It’s a very, very large place and hard to make an impact.

So I don’t know what guidance to give in terms of substituting for mass protest, other than we still have representatives in a democracy so you have to make your voice heard, because all of Trump’s lackeys, what they care about is staying in office. And we saw how scared they got running away from constituents, from their town halls, over health care, if you remember that. That really unnerved them. Now again, we can’t show up in person, but people are home. Some people have more time on their hands, they certainly can make their voices heard. It’s arguably more important than ever.

And the other thing that doesn’t need in-person protests to do and has proved effective are economic pressure campaigns. Boycotts. There’s an account that this is on Twitter that’s very effective. I’m forgetting the name.

Yes! And there are others. So that is something that has worked off and on very successfully and we’re overlooking it a little bit right now because well, we’re all a little freaked out and trying to survive. That economic pressure campaign can work well.

And then I’d circle back to trying to give as much media to people who have seen the light, who believed Trump and Republicans and no longer do. That’s important.

A HuffPost Guide To Coronavirus