This crease in Biden's shirt fueled a conspiracy theory

(CNN Business)President Trump’s bout with coronavirus, and his continued and frequently dishonest downplaying of it, isn’t just a problem for his re-election campaign. It’s also putting Big Tech in an uncomfortable position, on a collision course with the President over what they’ve portrayed as strict rules regarding misinformation about the virus.

For the past few months, both Facebook and Twitter have been applying labels to some of Trump’s posts when they contain election misinformation. Beyond fitting with the philosophical positions the companies have taken about being in favor of nearly unfettered free speech and not wanting to be the arbiters of truth, their strategy of applying labels rather than removing posts is a politically prudent one — the companies can claim they are doing something without being accused of silencing the President. 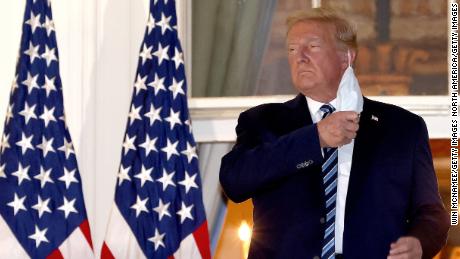 But — in trying to tackle false claims about the virus — the companies have made the problem of Covid-19 disinformation coming from the President more complicated for themselves.

Both companies say they may entirely remove any posts about the virus that could result in harm. In August, both Facebook and Twitter removed videos posted by Trump and his campaign of an interview Trump gave to Fox News in which he falsely claimed that children are “almost immune” to the virus.
That policy gives the companies less cover if and when they decide not to remove a post by the President containing misinformation about the virus. On the other hand, the removal of his posts is far more likely to prompt Trump’s ire than the small labels the companies now regularly apply to his posts.

The stakes for the companies are high — if they leave the posts untouched, they are allowing misinformation about a deadly virus to spread across their platforms. But call out Trump’s misinformation and they risk facing the wrath of his administration and his allies in Congress.
Trump made that abundantly clear on Tuesday. After Facebook removed one of his posts making false claims about the virus and Twitter labeled it as misinformation, the President posted on both platforms, “REPEAL SECTION 230!!!”
The post was a reference to Section 230 of the Communications Decency Act, which gives companies like Facebook and Twitter immunity from being held responsible for almost all of what is posted on their platforms, as well as for how they moderate it.
Trump wants to change the law because he and many of his supporters are convinced Silicon Valley is biased against the right — Trump wants less moderation, or at least less moderation of content posted by his supporters.
Former Vice President Joe Biden also wants to “revoke” Section 230 — but for very different reasons: He wants the companies to be more proactive in removing harmful content from their sites.
The impact of platforms taking action against Trump’s posts are two-fold. Misinformation about a deadly virus circulates widely online. And it irks the Biden campaign, who could be in the White House come January.
The Biden campaign has repeatedly called out Facebook for what it says is giving Trump a pass.
On the eve of the first presidential debate last week, Jen O’Malley Dillion, Biden campaign manager, wrote in a letter to Mark Zuckerberg that his company’s refusal to remove voter misinformation shared by the President amounted to the company becoming the “nation’s foremost propagator of disinformation about the voting process.”
As Trump now views downplaying the risk of the virus as one of the most critical parts of his campaign, Facebook and Twitter may find themselves having to take action against the most powerful man in the world on a daily basis.
Whether that will result in the Democrats, still seething from 2016 and their view that Facebook helped get Trump elected, going easier on Silicon Valley if Biden takes office is hard to say.

Some Facebook and Twitter employees are of the impression they are damned when they act against Trump and damned when they don’t.
Asked about Facebook in January, Biden said, “I’ve never been a big Zuckerberg fan. I think he’s a real problem.”
Source: Read Full Article