This self-driving car has no steering wheel or pedals

Washington, DC (CNN)Cruise, the self-driving subsidiary of General Motors, started offering robotaxi rides this week in San Francisco. Anyone can sign up for the chance to be selected to get a ride in a self-driving car, provided they don’t mind staying up late. Cruise’s robotaxis are generally only operating from 11 p.m. to 5 a.m, according to the company. Access is limited, so people are likely to find themselves idling on Cruise’s wait list. So far Cruise says it’s given more than 500 rides.

Cruise has for years tested its self-driving cars in San Francisco and planned to offer rides to the public.
“The chaotic, gritty streets of SF are our launchpad,” Cruise’s then-CEO Dan Ammann wrote in a 2020 blog post. “An electric car, driving by itself, navigating one of the most difficult driving cities in the world.”

But Cruise’s nighttime hours will largely shield it from the hardest challenges of city driving, according to autonomous vehicle experts. Driving late at night is easier for autonomous cars and comes with fewer risks. There are far fewer challenges on the roads, as pedestrians, cyclists and other cars are rare. Construction sites, a challenge for robotaxis, are generally not active at night.

Cruise only applied with the California DMV to operate its robotaxi service from 10 p.m. to 6 a.m. Cruise spokeswoman Tiffany Testo declined to say when it might apply to operate during daylight hours, the timeframe that will offer far more potential users.
But Cruise claims the nighttime hours offer a unique business opportunity.
“We are starting where we think we can have the greatest impact,” Testo said in an email. “Drivers are tired, distracted, have low visibility, or drunk. And it’s the time when safe and accessible options are most limited.”
Robotaxi promoters, including those who stand to make money from them, have long forecasted the technology to be worth trillions and revolutionize transportation. Last month the investment firm Ark Invest predicted that autonomous ridehail platforms would add $26 trillion to global GDP and $2 trillion in profits per year.
Yet Cruise, like the entire self-driving industry has been slowed by the realization of how difficult it is to build a self-driving car that works and can be operated profitably. Ammann departed suddenly last month and GM president Mark Reuss hinted in a CNBC interview shortly after Ammann’s exit that there had been differences in what was the best strategy for the companies.
“Cruise and GM, we’re really totally aligned now on accelerating the joint autonomous vehicle strategy,” Reuss said.
Companies like Uber and Lyft have abandoned in-house self-driving efforts. One self-driving company, Starsky Robotics, shut down as its founder blamed the immature state of artificial intelligence needed for autonomous vehicles.
“Supervised machine learning doesn’t live up to the hype. It isn’t actual artificial intelligence akin to C-3PO,” Stefan Seltz-Axmacher wrote in a 2020 blog post.
Other self-driving startups, like Zoox and drive.AI sold themselves to Amazon and Apple, respectively. Zoox was acquired for a fraction of what investors previously valued it at. Drive.AI’s founding team split up, with only some of them joining Apple.
Waymo, the longtime leader in self-driving technology, having been first to offer a robotaxi trip and launch a public service, offers robotaxi trips in Chandler, Arizona. But its vehicles still struggle with inclement weather, avoid left turns, and aren’t programmed to use shared turn lanes. 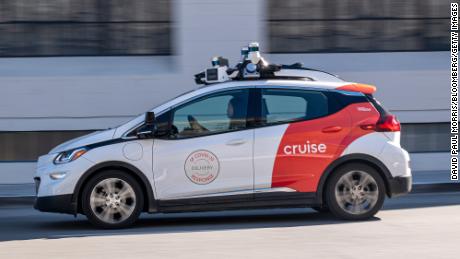 Cruise itself said in 2017 that if its growth rate held constant it would offer robotaxi rides on a large scale in complex environments in 2019.
But Cruise today has approvals from the California DMV to operate only 52 robotaxis. It operates in roughly half of the city of San Francisco, excluding some popular and bustling areas like the Market Street business corridor.
Srinivas Peeta, a Georgia Tech engineering professor, told CNN Business that a lower-risk, nighttime launch could make sense as robotaxis are still a work in progress. There are fewer pedestrians and cyclists, and fewer people to inconvenience if the car gets confused and blocks traffic.
Cruise competitor Waymo faced an embarrassing situation last year where one of its vans was confused by traffic cones and blocked traffic at a construction site.
Videos posted on social media show that Cruise’s vehicles do not always pull curbside — out of the flow of traffic — when picking up or off boarding passengers. In some cases, Cruise’s vehicles have no other option but to double-park because of limited street parking. But in other cases, the Cruise vehicles have bypassed open parking spots.
Cruise declined to address the videos, and said its protocol is to pull over to curbside spaces when available.
While there appear to still be kinks to work out, early riders appear to be enjoying their trips, according to videos posted on social media. Many are Cruise employees or friends of the company, and rides are currently free.
Jenny Bentley, who lives in the Bay Area and recently rode in a Cruise robotaxi, told CNN Business that she’s eager to take more trips.
“It felt very much like, ‘Oh, this is like a Disneyland ride where it’s on a track, and the steering wheel starts moving,” Bentley said.
Bentley said that she’s prone to getting carsick when scrolling on her phone in an Uber or Lyft and that the Cruise ride felt much smoother. Bentley said she felt comfortable riding in the vehicle and was reassured when Cruise’s remote customer support checked in with her over an in-car intercom.
Bentley said she had only one issue on her two trips, when the vehicle doors wouldn’t unlock as she attempted to start one trip.
Cruise riders hail a vehicle on an app. When the car arrives, they hit a button to unlock the doors and then get in. The car doesn’t move until passengers buckle their seatbelts. Bentley said she was able to talk to customer support through the car’s closed windows, and they remotely unlocked the doors for her.