Top investment analysts and fund managers say the Australian sharemarket could be approaching a bottom after a stomach-churning rout in March, but warn signs of progress on containing the coronavirus will be critical before investors regain confidence.

Last week was the worst for the local bourse since the global financial crisis. When it closed on Friday at 4816.6 points the benchmark S&P ASX200 index was down a whopping 33.1 per cent from its February high of 7197.2. The sharp reversal in just 21 trading sessions has wiped out four years of gains. 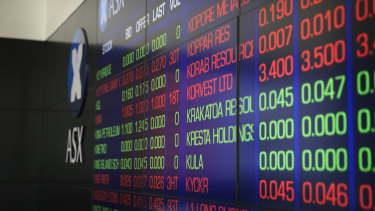 The coronavirus outbreak has triggered turmoil on financial markets Credit:Getty

Damian Boey, the head of macro strategy and economics at Credit Suisse is now forecasting the local index to rise at an annualised pace of 6.6 per cent over the next five years.

"If you look at the valuation of Aussie equities, we estimate that the valuation has come off so much that over the next five years you should be expecting 6-7 per cent annualised returns on the index," he said.

The 33 per cent decline triggered by the coronavirus pandemic compares to a peak-to-trough fall of about 54 per cent for the ASX/200 between October 2007 and March 2009 during the global financial crisis. It took 12 years for the local market to fully regain the losses from the GFC.

AMP Capital chief economist Shane Oliver said while the Australian market was "getting nearer" to the bottom, but evidence of progress in containing the coronavirus will be critical for boosting confidence.

"We're seeing all the things we need for a bottom, shares are now very cheap, we’ve seen panic in the streets which is often what you see at market bottoms, and we've seen policy stimulus," he said.

"The only problem, the thing we haven't seen is confidence that coronavirus is coming under control – and that I think is the big problem here," he said.

"Because as long as the shutdown continues there's going to be a big hit to economic activity, and at the moment we don't have any confidence as to when that's going to end or how deep it will be. And until we get confidence on that front, it's premature to say we've actually hit bottom," he said.

Senior portfolio manager at Investors Mutual Limited Hugh Giddy said he was steering away from growth stocks, like Wisetech and Afterpay, which were likely to suffer amid the extreme market volatility. Afterpay shares have fallen by 62 per cent in March.

You've got a lot of protection here. As an investor you can't wait for all the bad news to go past behind you before you can make a move.

Mr Giddy said Afterpay's customers were largely Millennials who were exposed to losing their job amid an economic downturn that would either cause customers to stop using the by now play later provider, or exploit it. "They might use it to buy something for $500 and get it for free, I’ll default and say good luck," Mr Giddy said.

IML has also sold stocks in the big four banks, that Mr Giddy said have been hit with low interest rates and now the likelihood of bad debt. "They're in a tough place."

Mr Boey's upbeat estimate of future returns for the ASX includes dividends. "You've got a lot of protection here. As an investor you can't wait for all the bad news to go past behind you before you make a move. You have to be a little bit more forward looking than that," he said.

"Anybody who's out there waiting for COVID-19 to be cured, or for exactly the right policy response to be in place, might be waiting a little bit too long to get in. Because the reality is that the market has moved. There is a significant margin of safety now, that protects you from even some things going wrong," he said.