Trump accuses McConnell, others in GOP of failing to fight for him

President Trump on Saturday accused Senate Majority Leader Mitch McConnell and other Republicans of failing to fight on his behalf regarding the outcome of the 2020 presidential election – which Trump continues to argue was "Rigged & Stolen."

The president’s latest claims came just 25 days ahead the scheduled Jan. 20 inauguration of Democrat Joe Biden, following the Nov. 3 election and a Dec. 14 vote by the Electoral College that all but confirmed Biden’s victory. Only a Jan. 6 session on Capitol Hill – at which lawmakers are expected to accept the election results – stands between Trump and the conclusion of his time in the White House.

It didn’t have to be that way, Trump suggested Saturday, alleging that McConnell and Senate Republicans haven’t worked hard enough to assure him a second term.

"If a Democrat Presidential Candidate had an Election Rigged & Stolen, with proof of such acts at a level never seen before, the Democrat Senators would consider it an act of war, and fight to the death," Trump wrote on Twitter. "Mitch & the Republicans do NOTHING, just want to let it pass. NO FIGHT!"

In another tweet, the president also accused the Justice Department and FBI of abandoning him. Attorney General William Barr, who led the DOJ, served his final day in the post Wednesday after announcing his resignation.

"The ‘Justice’ Department and the FBI have done nothing about the 2020 Presidential Election Voter Fraud, the biggest SCAM in our nation’s history, despite overwhelming evidence," Trump asserted. "They should be ashamed. History will remember. Never give up. See everyone in D.C. on January 6th."

In a previous tweet Dec. 19, Trump had invited his supporters to attend a "Big protest in D.C." on the day that Congress is scheduled to accept the election results.

"Be there, will be wild!" Trump wrote at the time.

In subsequent tweets Saturday, Trump railed about a lack of results from Special Counsel John Durham’s investigation into the origins of the Russia probe, and derided the U.S. Supreme Court as being "totally incompetent and weak" regarding his allegations of election fraud. (Legal efforts by the Trump 2020 Campaign and Republicans in some state-level legal disputes have largely failed to produce victories on voter-fraud claims.) 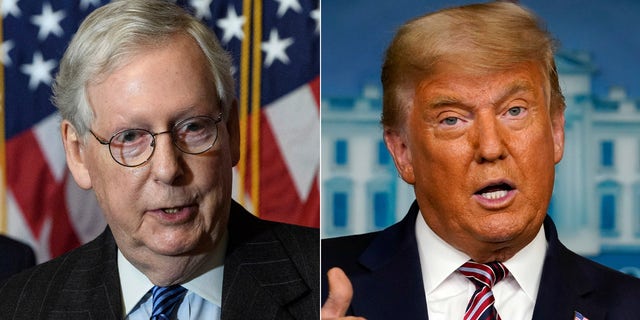 President Trump called out Senate Majority Leader Mitch McConnell by name Saturday as he accused Republicans of not fighting hard enough on his behalf.

Many of Trump’s tweets on Saturday carried a disclaimer affixed by Twitter, saying "This claim about election fraud is disputed."

Also on Saturday, Trump defended his legal team after reports that potential sanctions against them were being pursued by Dana Nessel, the Michigan attorney general, after the Trump campaign had disputed that swing state’s election results, which were in favor if Biden.

"These lawyers are true patriots who are fighting for the truth and, obviously, getting very close," Trump wrote. "AG should be sanctioned. Fight on!"

It remained unclear whether Trump’s call for action would be heeded by McConnell and other top Republicans.

After the Electoral College vote Dec. 14, the majority leader referred to Biden as "president-elect" for the first time, suggesting he was ready to accept the Democrat becoming the nation’s chief executive in less than a month.

"The Electoral College has spoken, so today I want to congratulate President-elect Joe Biden," McConnell, R-Ky., said on the Senate floor Dec. 15, one day after electors voted. "The president-elect is no stranger to the Senate. He's devoted himself to public service for many years."

Some other Republicans followed suit.

"At some point, you have to face the music," Sen. John Thune of South Dakota told the Associated Press Monday. "Once the Electoral College settles the issue today, it’s time for everybody to move on."

Sen. Roy Blunt of Missouri, chairman of the inaugural committee, said the panel will now "deal with Vice President Biden as the president-elect."

As for Democrats, House Speaker Nancy Pelosi reportedly told members of her party she was determined to make sure Trump leaves office Jan. 20.

"I plan to pull him out of there by his hair, his little hands and his feet," Pelosi said, according to Politico.