Republican Lynda Blanchard is the first candidate to jump into the Senate race to succeed longtime GOP Sen. Richard Shelby of Alabama.

“If you’re sick of career politicians, insiders and swamp creatures that stand for socialism or cheerlead censorship, then I’m asking for your vote to stand strong for Alabama by sending a true outsider to the Senate,” Blanchard said Thursday in a  video announcing her candidacy.

The 61-year old Blanchard, who served as U.S. ambassador to Slovenia during the final two years of the Trump administration, emphasized that “my pledge to you is simple: together, guided by God’s blessings and your support, we will give the Swamp a heckuva dose of the common sense and conservative principle that it needs to truly ‘Make America Great Again’ – just like President Trump did.”

Blanchard is making an initial $5 million deposit in her Senate campaign committee, according to her announcement news release.

The conservative candidate highlighted that her service as an ambassador “lit a fire in me to continue the cause as a public champion for the values we hold near and dear – free speech, the right to bear arms, religious freedom, the sanctity of life for all of God’s children, born and unborn, lower taxes, a secure border, the belief that America is the greatest nation that the world has ever known.”

In her video, Blanchard takes aim at the top Democrats in the nation’s capital, charging that “Biden, Schumer, Pelosi and the Squad are working fast to erase triumphs of the Trump administration from our history.”

Blanchard’s campaign is being led by Jeff Roe and Ethan Zorfas of Axiom Strategies, who served as the lead consultants on Tommy Tuberville’s successful 2020 Senate campaign in Alabama.

The launching of Blanchard’s campaign comes two weeks after Shelby announced that he would retire after 2022 after serving six terms in the Senate. He became the fourth Senate Republican to announce he won’t seek reelection next year, when the GOP will try to regain the majority in the chamber that it just lost to the Democrats in the 2020 election cycle. 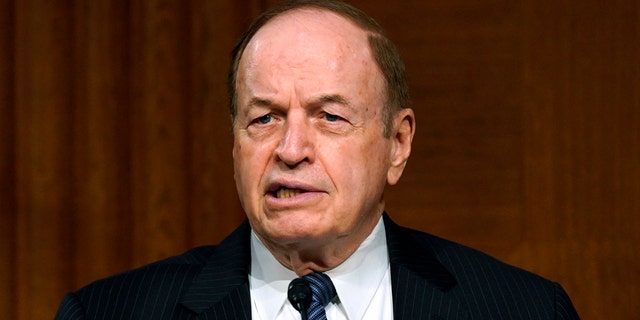 Shelby started his political career as a Democrat, serving eight years in the Alabama state Senate. He won election to the U.S. House in 1978, representing the state’s 7th Congressional District. Shelby was first elected to the Senate in 1986, and switched parties and became a Republican in 1994.

Shelby announced that  “for everything, there is a season” and he emphasized that “I am grateful to the people of Alabama who have put their trust in me for more than 40 years. I have been fortunate to serve in the U.S. Senate longer than any other Alabamian.”

During his nearly 35 years in the Senate, Shelby chaired important and powerful committees, including Banking and Intelligence, and most recently Appropriations, which he used to direct federal funding to numerous projects in Alabama.

The Senate is split 50-50 between the two parties, but the Democrats control the chamber due to the tie-breaking vote of Vice President Kamala Harris. That means Republicans only have to flip one seat in 2022 to regain the majority they lost following the Democratic sweep in last month’s twin Senate runoff elections in Georgia.

But the GOP is defending 20 of the 34 seats up for grabs next year. The difficult map isn’t the only obstacle facing the Republicans. They’re defending open seats in two crucial battleground states – in Pennsylvania with the announced retirement of GOP Sen. Pat Toomey and in North Carolina, where Republican Sen. Richard Burr isn’t running for reelection. And two-term GOP Sen. Rob Portman of Ohio announced last month that he’ll retire from the Senate rather than run for reelection in 2022.

There’s also a potential headache in Iowa, where 87-year-old GOP Sen. Chuck Grassley is staying mum so far on whether he will run for an eighth six-year term. In the battleground state of Wisconsin, Republican Sen. Ron Johnson hasn’t said if he’ll run for a third term.

But Republicans see pickup opportunities in the key battlegrounds of Georgia and Arizona, where Democrats Raphael Warnock and Mark Kelly won special elections to serve two years in the Senate and are up for reelection in 2022. The GOP also sees possible pickups in Nevada and New Hampshire, where first-term Democratic Sens. Catherine Cortez Masto and Maggie Hassan are running for reelection.

While holding onto Shelby’s seat in the deeply red state of Alabama shouldn’t be a problem in 2022, the battle to replace him could spotlight the current fissures in the GOP between more traditional conservatives such as Senate GOP Leader Mitch McConnell, R-Ky., and those loyal to Trump. The former president and McConnell are currently involved in a nasty spat that threatens to make life uncomfortable for Senate Republicans running in 2022.

While Blanchard’s first in to the race to succeed Shelby, possible candidates include Shelby’s former chief of staff, Katie Boyd Britt, who currently serves as the CEO of the Business Council of Alabama, Alabama Secretary of State John Merrill, who suspended his 2020 Senate campaign when former U.S. Attorney General Jeff Sessions jumped in the race, and Rep. Mo Brooks.