The rioters who ransacked the U.S. Capitol did so “of their own accord” and some actually opposed Donald Trump, the former president’s legal defense team claims in a brief presented this week as part of the Senate impeachment trial.

But that’s not what the insurrectionists themselves say.

Trump lawyers Bruce Castor, David Schoen and Michael van der Veen argue that because some rioters planned their attack in advance, Trump’s exhortations to “fight like hell” on Jan. 6 couldn’t have inspired the attack on the Capitol.

“The real truth is that the people who criminally breached the Capitol did so of their own accord and for their own reasons, and they are being criminally prosecuted,” the brief says, specifying in a footnote (containing one of the brief’s many typographical errors) that those reasons were “Some anti-Trump, some ani-government.”

The argument that Trump’s statements that day didn’t incite the attack ignores the larger picture: The president spent months lying that the election had been stolen, and that invited mayhem. Current and former law enforcement officials told HuffPost just days after the 2020 election that violence was an entirely predictable outcome of spreading lies about a stolen election. Many of the insurrectionists arrested for their actions at the Capitol said explicitly that this is why they were there.

Gina Bisignano, the Beverly Hills salon owner who stormed the Capitol in a Louis Vuitton sweater and gave the criminals attacking police officers instructions over a megaphone, told the FBI that she “felt called upon by President Donald Trump to travel to D.C. to change the outcome of the election, which she believes was stolen.”

Kyle Fitzsimons, charged with assault on a federal officer and other charges in connection with the attack, said at a town meeting that he believed “Trump is a lion leading an army of lambs through ‘lawfare.’”

Bruno Cua, an 18-year-old from Georgia, posted screenshots of Trump’s posts and said in the lead-up to the attack that the president was “calling us to FIGHT!”

The examples go on and on. Scores of defendants charged in connection with the Capitol attack have explicitly made clear — via social media posts, interviews with federal agents and court filings ― why they were fighting for Trump: because they thought he wanted them to. 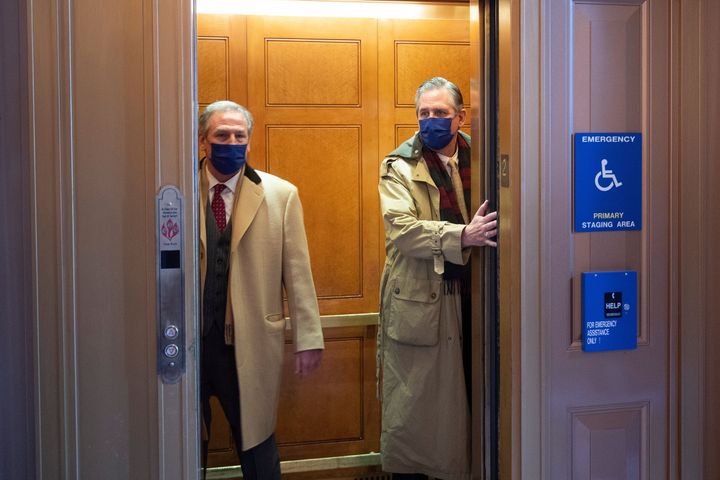 Most Senate Republicans have indicated they will vote to acquit Trump based on the dubious argument that the impeachment trial is unconstitutional because he is no longer president ― even though the House impeached him while he was in office and the Constitution gives the Senate the sole power “to try all Impeachments.”

The formal trial memorandum Trump’s lawyers filed Monday shows that an actual defense of his conduct requires a deep foray into an alternate reality in which extremists laid siege to the Capitol for no particular reason. The brief cites a story from the far-right conspiracy-theory website Gateway Pundit, which claims “anti-Trump groups primarily perpetrated insurrection on the U.S. Capitol on Jan. 6” and cites statements from a single self-described “Boogaloo Boi.”

Republicans in Congress have also peddled the lie that insurrection was a false flag attack carried out by people trying to sabotage Trump. Reps. Matt Gaetz (R-Fla.) and Mo Brooks (R-Ala.), for instance, claimed it was actually the loosely organized anti-fascist group known as “antifa” that stormed the Capitol.

And on Tuesday, Rep. Marjorie Taylor Greene (R-Ga.) joined in on the lie that it wasn’t Trump supporters who were wearing Trump hats, Trump shirts and waving Trump flags as they threatened to kill members of Congress for certifying Trump’s election defeat that day.

“The attack RUINED our objection that we spent weeks preparing for, which devastated our efforts on behalf of Trump and his voters,” she said in a tweet.

In fact, Greene and 146 other Republicans followed through with their objection to the election after the assault ― it’s just that there weren’t enough of them to throw out Joe Biden’s victory.

In a reply brief on Tuesday, Democrats said the claim that Capitol rioters were there of their own accord “defies belief,” saying the factual record lays out Trump’s “singular responsibility” for what happened.

“That he does not like being held responsible by Congress does not allow him to rewrite history,” the Democrats said.