Tucker Carlson: This is what inflation really is in the United States 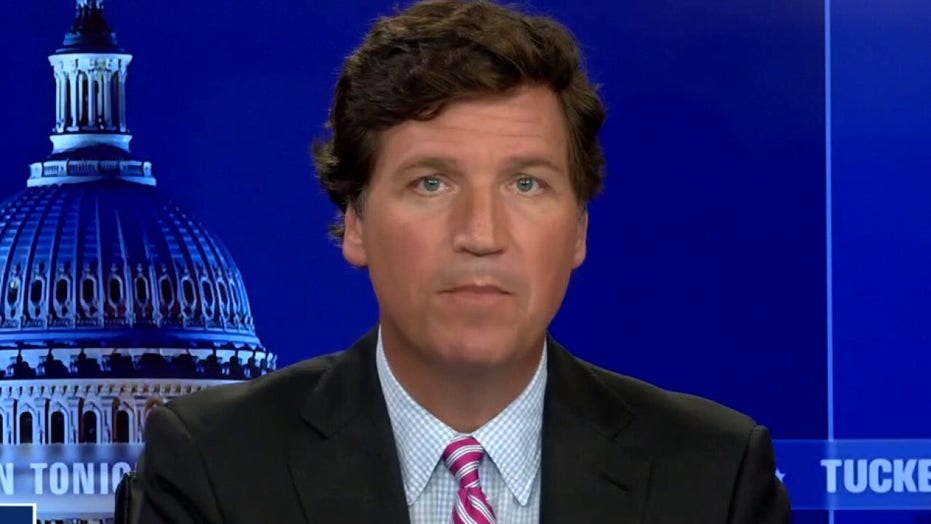 Tucker: This is impossible to ignore

There’s a lot about modern economic theory that’s important but difficult to understand. In fact, many people formulating these theories don’t really understand them, and that’s why they can never explain anything clearly. But there is one core economic fact that everybody, even those of us with poor math skills, grasps instantly, and that’s when we’re getting poorer. How do you know when you’re getting poor? You know you’re getting poor when you don’t have enough money to do the things that you once did. You are moving backward. It is a very scary feeling.

Short of armed robbery. Nothing makes Americans poorer faster than inflation does. Now, finance moguls who borrow money for a living love inflation. It makes their debt cheaper. It’s a good thing for them, but everyone else hates it because it crushes them in ways that are very obvious day to day.

So with that in mind, the new inflation numbers are out and they’re the worst this country has seen in nearly 40 years. According to the Consumer Price Index, inflation is up almost seven percent over the past 12 months. It’s very high. The problem is the reality is much worse than that, and that’s because the consumer index is useless as a guide to life in America, it doesn’t actually measure the cost of living. In that way, it is a lie. It’s a rigged government number one of many. Now, the CPI is calculated by assigning relative weight to different categories of goods. It’s a very complex series of formulas. Some of them were formulated in good faith. Others were designed to deceive you. But in effect, the bottom line is, the CPI does a very bad job of measuring how much it actually costs to live in this country.

For example, gas prices in the CPI. Gas prices constitute less than four percent of the total value of the products included. Now that’s realistic if you happen to live in, say, Manhattan where pretty much nobody drives a car. But if you have a car and you drive more than a few miles to work every day, that’s ridiculous because, for you, gas prices are a far larger part of your budget. And yet all of this is ignored by the CPI.

You don’t need to be an economist to understand this. The bottom line is these are not accurate numbers. But they were put together by people who we consider very smart, so you have to ask yourself, why are these numbers inaccurate? Think about it.

The consumer price index measures the downside of federal economic policy. So let’s say you printed too many U.S. dollars. You wanted to fund useless programs and pay off your donors. Now, if you did that, you would devalue your own currency. You would cause inflation over time. You would impoverish your own population. Those would be the effects. But of course, you would want to hide those effects. You instead want to tell everybody that thanks to you, the economy is great, and the consumer price index allows politicians to do that.

The CPI allows reckless, economically illiterate leaders to hide the mess they have made. It’s a conflict of interest, if there ever was one, it’s like putting Bernie Madoff in charge of the audit committee. What do you think’s going to happen if you do that? Fake numbers allow fake economists to tell a fake story about what’s actually happening to the country. And they’ve definitely been doing that. 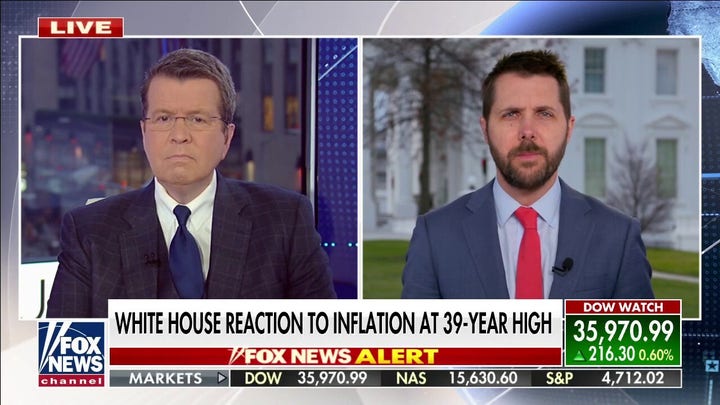 JEN PSAKI MAY 25: Our economists have conveyed that they feel that the impact of our proposals will be transitory.

JENNIFER GRANHOLM NOVEMBER 7: All of the economists that the president has been relying on suggest there is a transitory nature to the inflation problem

MAXINE WATTERS NOVEMBER 28: This inflation that we’re experiencing is transitory. It is not going to be here for long.

JANET YELLEN JUNE 14: We’ve had several months of high inflation that most economists including me believe will be transitory.

JEROME POWELL MARCH 24: We don’t expect that that upward pressure will produce substantially higher prices or that the effects will be persistent, we expect that they will be transitory or temporary.

The usual cavalcade of liars and dumb people. Maxine Waters on economic policy, please stay in your lane. But the last guy is regarded as very smart. His name is Jerome Powell. He is, believe it or not, the chairman of the Federal Reserve. Powell has now updated his assessment transitory after weeks of being laughed at. He no longer uses that word “transitory” to describe inflation. “I think it’s probably a good time to retire that word,” Powell said. Too late, Jerome. No one believes you anymore. No one ever did, who was paying attention.

In fact, there’s only one accurate way to measure inflation, and somehow the Fed has not yet figured this out. Here it is: You ask yourself, what does it cost you to live in this country compared to what it cost you a year ago? It’s not complicated. Do the math, and you will see that the actual number, the rise in inflation is not even close to the seven percent that Washington is claiming.

And those are just the numbers you see on the label at the grocery store. In addition to conventional inflation, consumers also face widespread shrinkflation. That’s an informal term that economists use for the stealth shrinking of consumer products. So companies sell you less for the same price. Have you bought a Snickers bar recently? If it seems a lot smaller than it used to, that’s because it is. 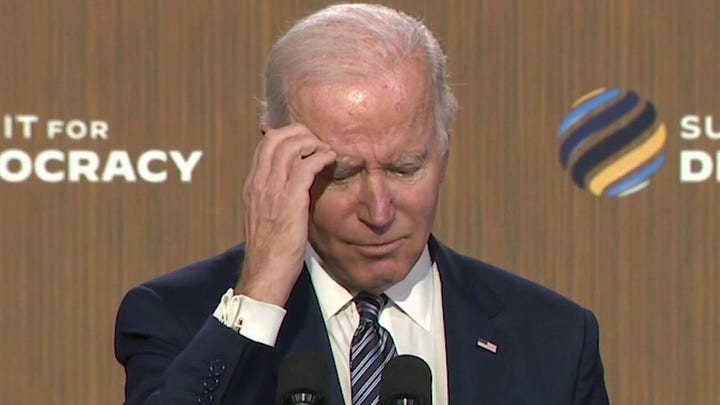 And those are the products you buy. Most people in this country still live indoors, and the cost of living indoors has risen dramatically. Rents in Southern California, for example, have tripled in a single year as this recent Fox package reports:

REPORTER: Inflation and migration: People are Orange County and LA are moving to the Inland Empire in search of affordable housing.  These are two reasons for the booming real estate market and high rents in the Inland Empire. … Some landlords have more than tripled rent prices in the last year.

WOMAN: An apartment in a not great area of Redlands – it used to go for $800 a month. We just noticed it was up for $2,600 a month. The space hasn’t changed. It’s a two-bedroom apartment with barely any livable space.

$2,600 per month for a depressing little unit in a deeply crummy part of the state that cost $800 a year ago. So that’s what was going on in this country when Jerome Powell and Joe Biden were telling you that inflation was transitory. These people don’t buy things or are they just lying. Either way, everybody else knows exactly what’s going on because it’s impossible to ignore.

REPORTER: Americans are seeing the effects of inflation in their budgets. General Mills even announced they’re raising the prices of their cereals by up to 20%.

REPORTER: The grand total for our Thanksgiving dinner was $51.25. More than 20% over last year’s list

REPORTER: The Dollar Tree is hiking prices from $1 to $1.25 for most items.

REPORTER: If you’re lucky enough to find ammo, you’ll pay more for it

REPORTER: Pizzerias across the five boroughs are raising the price of a slice. Dollar slices are up to $1.50.

REPORTER: Those who heat with oil will need to dig deeper this year.

OIL WORKER:  The average homeowner is probably going to pay about $500 more for the heating season than they did a year ago.

Oh, so tell us again, Joe Biden, how inflation is at seven percent. Read some more government numbers to us.

One group that would never even consider believing numbers like this – crap like this – is investors. They’re not looking at the consumer price index, they do this for a living, and they know exactly what dangerous inflation looks like. And that’s why they’re buying hard assets. You see it everywhere. 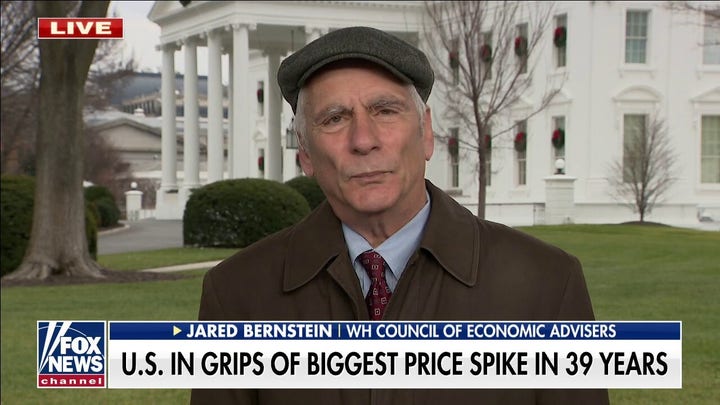 The median sales price of an existing single-family home in Austin, Texas, increased 33.5% percent in a single year. The median price of a condo around Miami has gone up nearly 21%.  Now, real estate in Dade County was already wildly overheated. Now it’s a bonfire.

Why is that happening? Simple. Investors are afraid. Consider equities prices. The S&P 500 is up 28% in the last year. Now, if you’re looking for the real inflation rate, that’s a lot closer than the CPI is going to get you.

What’s happened in bitcoin? It’s up 164% percent in the past year. Etherium and other cryptocurrencies up 622% percent. So you should consider that a referendum on the strength of our economic system, as judged by the people who know the system best, because that’s exactly what it is.

So these are major changes to the U.S. economy, and they’re very ominous for financial journalists, there is no bigger story right now than this what we just said. And yet amazingly, these shameless hacks are studiously ignoring it.

JIM CRAMER: To me, we have the strongest economy, perhaps I have ever seen. Did you see that number this morning? That unemployment number? Best in years, best since ‘69. We have all spotted the endless help wanted signs, the housing department shortages, the tremendous demands for goods and services. A marvel to behold. Oh people are confident about their jobs, I say fantastic. And the ability to even get better ones if they want to. They’re spending more than I’ve ever seen but they’re doing it with cash not on credit. There doing so in a roaring 20s style.

Imagine believing that – Jim Cramer of CNBC. So how should we feel about Jim Cramer’s assessment of our economy? Well, it may be a little bit early to apply for a foreign passport, but it’s not a good sign. Not at all. It was Jim Cramer you remember who told you to buy Bear Stearns a few days before it disappeared completely.

JIM CRAMER: Should I be worried about Bear Stearns in terms of liquidity and get my money out of there? No! No! No! Bear Stearns is fine. Do not take your money out. If there’s one takeaway, Bear Stearns is not in trouble. I mean, if anything, they’re more likely to be taken over. Don’t move your money from Bear. That’s just being silly. Don’t be silly.

Bear Sterns not in trouble. No, no, no. Bear Stearns is fine. Do not take your money out.

That’s what he said right before the crash. Now, in a normal country with a functioning meritocracy, anyone who says something like that would no longer be touting stocks on television, they’d be cleaning your pool, assuming he could muster the skills to do that.

And yet there he is, the same man still televised a living testament to our leaders’ suicidal tendency to reward failure.

Or consider Andrew Ross Sorkin. His bosses consider him the smartest man on CNBC. In fact, he’s about as bright as Jim Cramer is, but much oilier. Sorkin’s view is that we ought to be grateful for inflation. You ought to be thankful to Joe Biden “Inflation has long been seen as the economic villain. … That view is changing. For those who worry about growing inequality, inflation might actually be a salve up to a point.”

Oh, thank you, Andrew Ross. So, we’re becoming Venezuela, but that’s a good thing because your neighbor is going to be every bit as poor as you are.

So that’s the current state of the cutting edge of financial journalism in this country.

This article is adapted from Tucker Carlson’s opening commentary on the December 10, 2021 edition of “Tucker Carlson Tonight.”