Boris Johnson’s government suffered another public relations blow and came under pressure to recall Parliament after the country’s death count from the new coronavirus approached 10,000.

In her first public appearance for several weeks, Home Secretary Priti Patel led Saturday’s daily government briefing and was asked to apologize for previous comments by Health Secretary Matt Hancock, who had said personal protective equipment should only go to people who really need it.

His line that PPE should be treated “like the precious resource that it is” was deemed by the Labour Party’s new leader Keir Starmer as an insult to front-line medical staff.

“I’m sorry if people feel that there have been failings,” Patel said in comments that, to some, smacked of a non-apology.

Her later stumble in announcing the number of people who’d been tested for the virus provided critics with another reason to unleash on Twitter. 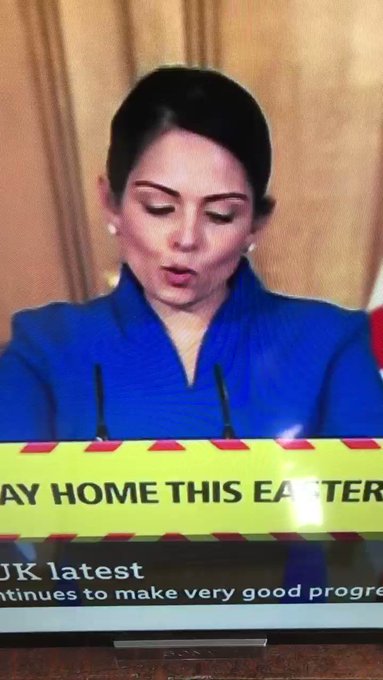 And Hancock took to BBC Radio to deny suggestions by a senior National Health Service leader that he’s failed to properly follow social distancing rules by meeting in person with numerous colleagues.

All told, it was another string of missteps from a government that’s been increasingly pilloried for its handling of the crisis. Delays in announcing the public lockdown, confusion over how much overall authority Foreign Secretary Dominic Raab has in the absence of the ailing Johnson, and mounting pressure on ministers to spell out how they plan to ease restrictions have put the Tory administration on the back foot. Meanwhile, Saturday’s death tally of more than 900 for a second straight day made for grim reading.

Starmer’s election as Labour leader this month adds to the sense that the government is finally having to answer questions that, after rendering the opposition toothless with December’s landslide election win, it could have safely deflected earlier.

According to the Labour-supporting Guardian newspaper, Starmer has asked for urgent talks with the Speaker of the House to discuss the recall of Parliament, which was suspended on March 25. Patel said ministers have talked about it but didn’t elaborate further.

“At some stage we will inevitably have to think about the work of Parliament, scrutiny and also legislation, but I think right now we are focused on absolutely making sure we save lives,” she said.