US Space Force on George Floyd death: ‘Racism is an enemy’

Advent Capital president Tracy Maitland weighs in as to what should happen next to seek justice for George Floyd’s death and what the business world’s role should be.

The United States Space Force in a memo Tuesday spoke on the death of George Floyd, which has sparked protests in Minneapolis and other major cities across the country.

“The tragic death of George Floyd is wrong and goes against the founding principles of our nation,” read the note, signed by Gen. John Raymond and Chief Master Sgt. Roger Towberman. “It also serves as a stark reminder that racism and unequal treatment is a reality for many and a travesty for all. As members of the United States Space Force we are not immune. Many in our Service feel this pain a daily basis and we all are hurting as we have experienced the sickening events that have played out in our cities around the country.”

The note continued to highlight the agency’s commitment to serve, saying, “we all raised our right hands and took an oath to protect and defend that U.S. Constitution, against all enemies, foreign and domestic."

Floyd’s death in police custody in late May has prompted responses from a wide variety of businesses and brands, as well as from former President George W. Bush. Bush said in a note Tuesday that he and former first lady Laura Bush “are anguished by the brutal suffocation of George Floyd and disturbed by the injustice and fear that suffocate our country.”

Comments from the U.S. Space force, as well as from public figures, come as demonstrations against the treatment of black Americans by police and other institutions span nationwide. 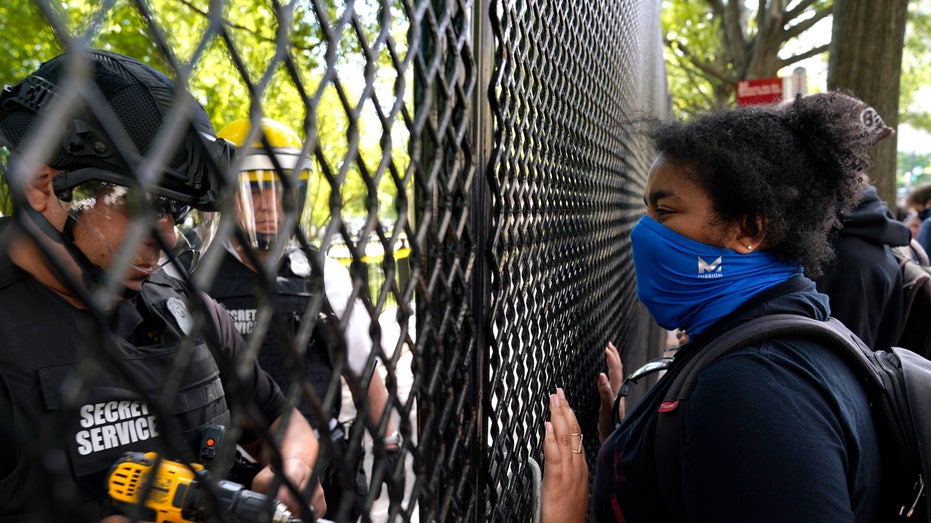 A demonstrator watches as a U.S. Secret Service police office works on a fence blocking Lafayette Park as protests in the death of George Floyd continue. (AP Photo/Evan Vucci).

“Our nation needs us to build this new Service to protect and defend our access to and freedom to maneuver in space…a vital national interest. However, it is not possible unless we build this Service on a foundation of dignity and respect,” the agency said, calling for diversity and inclusion, which “means we embrace every race, creed, gender, and ethnicity on equal terms … and in so doing, build a better and stronger Space Force and a better and stronger America.”