‘We are guests on their land’: Rio forms Indigenous advisory group to prevent next Juukan Gorge

Mining giant Rio Tinto will establish an Indigenous advisory group in a move to strengthen ties with traditional owners and reassure investors it will not repeat the widely condemned destruction of the 46,000-year-old caves at Juukan Gorge.

In a series of virtual seminars on Tuesday, top Rio Tinto executives and board members outlined new ways they intended to improve the company’s approach to cultural heritage and rebuild meaningful relationships with First Nations communities in the hope of mending its badly damaged reputation. 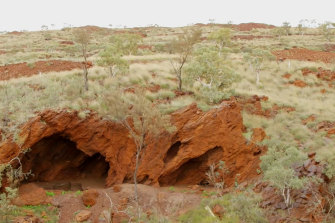 “This will not be easy. This is the start of a long journey.”

Rio Tinto’s blasting of the 46,000-year-old Juukan Gorge rock shelters, against the wishes of the land’s traditional owners, sparked a global outcry leading to the resignations of chief executive Jean-Sebastien Jacques and two of his deputies last year, while Rio chairman Simon Thompson will step down in coming months.

Rio’s new Indigenous advisory group, to consist of 5-8 members, will point out gaps in the company’s existing protocols for managing Indigenous cultural heritage, ensure a better understanding of Indigenous culture and issues across the business including at board level, and provide a “clear pathway” to re-establish trust over time, the company said.

“We must focus on real engagement with our communities, understanding their felt experience and never forgetting that, ultimately, we are guests on their land,” Mr Stausholm said.

Superannuation fund HESTA, which has been leading a group of investors’ engagement with the miner on First Nations issues, said Rio Tinto was “at the start of a very long process of rebuilding trust”.

Kellie Parker, Rio Tinto’s newly appointed head of Australia, told investors on Tuesday she cared deeply about the business, its people and communities and was honoured to have the opportunity to lead Rio “through this difficult time in our history”.

“When we place an emphasis on fostering mutual respect with our partners, we can create lasting and genuine relationships,” said Ms Parker, who grew up in the Pilbara and has worked for Rio for the past 21 years.

“My absolute objective is to harness this approach to help rebuild relationships and regain our standing in Australian society.”

Ms Parker said much focus has been placed on the external damage to Rio’s reputation inflicted by the Juukan Gorge disaster, “but what’s perhaps not as widely recognised is the impact on our own people”.

“Our task, however long it will take, will be to earn back trust both from inside and outside the company,” she said. “What gives me hope for the future is that there are so many people in our company who are determined to help us do better.”

Rio Tinto on Tuesday also vowed to increase transparency in its approach to cultural heritage, including details concerning how traditional owners’ views were being sought and considered and how the company was working to advocate for sector-wide cultural heritage reform. The commitments came after extended engagement with a group of asset owners in the United Kingdom, Europe and Australia.

“It’s pleasing that we’ve had constructive discussions with Rio Tinto that can support progress towards managing this clear financial risk for investors. The steps the company has agreed to will support broader improvements in practices, disclosure and oversight urgently needed across the mining sector.”

“It is vital for stakeholders to have trust in the company’s approach and actions,” he said. “This is a great opportunity for the company to use hard lessons learned over the past year to set a higher benchmark for company reporting on social impact and community relations.”