‘We can do it again’: Magellan CEO targets $100b revival

Magellan Financial Group’s new chief executive David George says the embattled group is capable of almost doubling its funds under management over the next five years to $100 billion as the investment landscape undergoes a structural shift.

The confident tone struck by George, who joined Magellan in May, comes as the fund manager works to resuscitate its fortunes after a horror 12 months in which it shed $62.4 billion in funds under management. Magellan’s share price has slumped over 43 per cent this year.

George said on Thursday said that Magellan has the foundations to support the growth he plans to deliver with its high-fee, active investment mandate in a world driven by inflation, geopolitical conflict, and business conditions returning to pre-COVID levels. 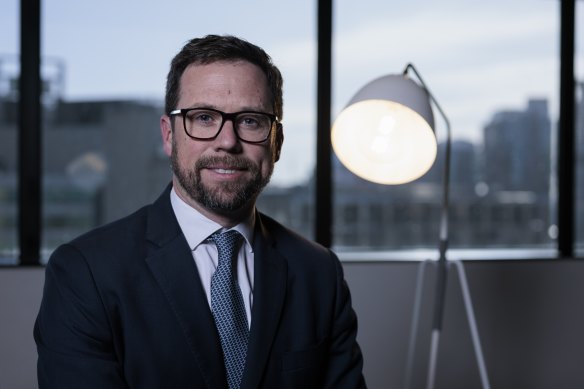 “I am bullish active management. The next 10 years will not be like the last,” George said in a speech delivered to investors at Magellan’s annual meeting.

“This is not an environment where a rising tide lifts every boat. Uncertainty drives opportunity for active managers. It impacts company costs and profit outcomes and will drive dispersion, and it is the environment where thoughtful, long term and deeply researched investing will be rewarded,” he said.

George, who was given the chief investment officer role this week, did not signal any major changes in strategy to return Magellan to its former glory. However, he added that future growth will be more diversified and less reliant on the global equities business, which helped Magellan build its reputation.

“I believe we will be a fund manager of global scale once more with over $100 billion of funds under management after five years,” he said.

He noted that his role as chief investment officer will not be one of a stock picker but instead oversee areas where performance has wavered.

“My role as CIO is not as a portfolio manager, but rather I am there to think more broadly about where the world and our clients are evolving toward and shape our investment capability to address this,” he said.

Magellan is yet to stem the outflow of funds triggered by the departure of its “rock star” stockpicker Hamish Douglass. Earlier this month, it reported a $6.7 billion drop in September taking its total assets under management to just $50.9 billion, down from $57.6 billion at the end of August. In the middle of last year, Magellan controlled $115 billion in assets.

Magellan’s rocky period began at the end of last year with the sudden resignation of former chief executive Brett Cairns. Former chief investment officer and co-founder Douglass then revealed he had split from his wife, and several months later announced he was taking medical leave after “intense focus” on his personal and professional life.

The fund manager has since announced Douglass will return as a consultant, not an employee.

Earlier this week, Morningstar put the various Magellan funds under review saying the latest reshuffle in leadership “reduces our conviction in this highly concentrated strategy.”

Magellan also announced on Thursday that industry veteran David Dixon has been appointed to the board of its main operating subsidiary, Magellan Asset Management, and is expected to be appointed to the MFG board in due course.