The company told investors on Wednesday morning its revenue for the first half of 2020 was up 6 per cent to $15.2 billion, ahead of expectations and reflecting a strong performance from its Kmart, Bunnings and Officeworks businesses. 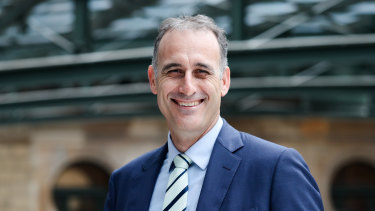 Wesfarmers chief Rob Scott said Target’s struggles were “due to a reduction in customer transactions and poor performance in key apparel categories.”Credit:Edwina Pickles

Net profit after tax, when adjusted to exclude discontinued operations, also came in above analyst forecasts at $1.14 billion, a 5.7 per cent increase on the prior corresponding half.

Bunnings, which accounts for over half of Wesfarmers' earnings, grew earnings before interest and tax 3.1 per cent to $961 million, while revenue increased 5.3 per cent to $7.2 billion.

Comparable sales for Bunnings beat expectations, coming in at 4.7 per cent against analyst predictions of 4 per cent. Officeworks also outperformed, with revenue growing 11.9 per cent to $1.2 billion and earnings up 3.9 per cent.

However, the company's Target and Kmart division emerged as a major drag on earnings, declining 9.9 per cent to $345 million, largely due to underperformance at Target.

Comparable sales at Target declined 2.3 per cent, far worse than the 0.5 per cent growth seen in the first half of 2019. Sales for Target declined $67 million, while Kmart's sales increase by $241 million, boosting overall revenue for the segment 7.6 per cent to $5 billion.

"While Target remained profitable, earnings were below expectations and decreased significantly compared to the prior corresponding period due to a reduction in customer transactions and poor performance in key apparel categories," chief executive Rob Scott said.

Earnings for Wesfarmers Industrials and Safety division sank 85.7 per cent, coming in at $6 million compared to $42 million in last year's first half, primarily due to higher costs and a 2.1 per cent drop in sales for the group.

Earnings at both Target and the Industrials division were also impacted by provisions for staff underpayment, coming in at $9 million and $15 million respectively. Wesfarmers said it would "accelerate plans" to address the unsatisfactory performance at the businesses.

As a result, Wesfarmers slashed its dividend by 25 per cent, down to 75 cents, payable March 31.

"In contrast to the rest of the Group, the Industrial and Safety result was disappointing and the performance of Target was below expectations. A number of initiatives are underway to address the underperformance of both businesses."