What Ruth Bader Ginsburg’s Death Could Mean For The Obamacare Hearing Nov. 10

The death of Ruth Bader Ginsburg is a tragedy for the country, which has lost a groundbreaking legal icon, and for the many causes she championed.

It could also be a tragedy for the millions of people who depend on the Affordable Care Act for health insurance because of a lawsuit that the Supreme Court is scheduled to hear on Nov. 10.

The case, now called California v. Texas, comes from Republican state officials and has the backing of President Donald Trump. It alleges that the 2010 health care law known as Obamacare contains a fatal constitutional flaw, requiring the justices to wipe it off the books.

Figuring out how Ginsburg’s death will affect its prospects is not easy, and legal experts that HuffPost contacted Friday night cautioned that it may take a day or two to think through the scenarios.

One is that the Affordable Care Act survives without much fuss, the program goes on as it is, and nobody loses coverage. This lawsuit is so weak that even conservative legal experts who supported previous challenges think it has no basis. Several or all conservative justices might join liberals in rejecting it.

But the lawsuit has already prevailed in two lower court cases, both times because Republican-appointed judges agreed with its rationale. And without Ginsburg, who was sure to uphold the law, the odds of the Affordable Care Act surviving go down.

That is true even if Republicans don’t manage to fill her seat before the hearing. One possibility now in play is a four-four tie. If that happens, two legal experts told HuffPost, then the Affordable Care Act could become something like a zombie statute ― one that is unconstitutional but that continues to operate while litigation continues before lower court judges.

“This should make people think again before (once again) saying that an absolutely ludicrous argument had no chance of destroying the ACA in SCOTUS,” Leah Litman, a University of Michigan law professor and former Supreme Court clerk, told HuffPost.

What The Lawsuit Says

The alleged constitutional flaw in the Affordable Care Act exists because Trump signed a Republican bill in 2017 that zeroed out the financial penalty for people who didn’t sign up for insurance.

That penalty, known as the “individual mandate,” was the subject of a celebrated 2012 case in which the Supreme Court upheld the law, with Chief Justice John Roberts joining the four liberals, on the grounds that the mandate was a constitutionally permissible tax.

The thinking behind this new lawsuit is that, with the penalty now zero, the mandate can’t be a tax ― which means it has lost its constitutional validity, which means the whole thing has to come off the books.

To say that argument has flaws is generous. It’s genuinely difficult to find a respectable legal scholar who will vouch for it. But in December 2018, it prevailed before a federal district judge, the conservative Reed O’Connor, who agreed that the entire law is invalid.

The U.S. Court of Appeals for the 5th Circuit heard it next. In a 2-to-1 decision, a pair of Republican-appointed justices agreed with O’Connor’s basic finding. But they also remanded the case back to him, with instructions to consider more carefully whether perhaps some parts of the law can stay.

At that point, the Supreme Court grabbed it, presumably to put the matter to rest once and for all. It is impossible to know which justices voted to take the case (it takes only four) or why.

What The Supreme Court Could Do

The Supreme Court has already rejected two previous challenges to the Affordable Care Act: the 2012 case and one that it heard in 2015. Legal scholars are in wide agreement that this new case is significantly thinner than either one of those.

But Ginsburg was a vote to uphold the law both times. Without her, things become a lot more complicated. For starters, because it’s not clear how many justices will even be on the court for the hearing.

With Senate Majority Leader Mitch McConnell promising a vote on a Donald Trump nominee to replace Ginsburg, the court could be back at full strength by early November, with a new judge expanding the conservative majority to six. But that is only weeks away, which means it’s also possible the court would hear the case with just eight justices.

The liberal judges seem likely to uphold the ACA again, and most experts have thought Roberts would be inclined to do the same, given that he passed up opportunities to invalidate the law when faced with stronger legal arguments. It’s entirely possible some of the other Republican justices would do the same in this case. 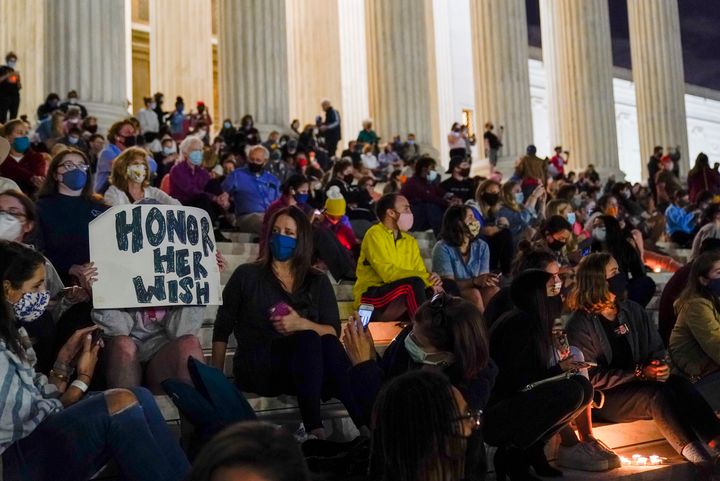 Or, if they want to get creative, they could issue a ruling that finds the mandate unconstitutional but leaves the rest of Obamacare standing. One candidate to take such a vote would be a Trump appointee, Brett Kavanaugh. In two cases this past session, he made arguments about a key principle, “severability,” that court watchers interpreted as a signal he might vote just that way.

“It’s good money that Kavanaugh is unimpressed with this lawsuit,” Nicholas Bagley, a constitutional law professor at the University of Michigan, told HuffPost. “I don’t say that as an advocate. I say that as a craftsman. … As a matter of legal argument, this case could not be weaker.”

But, Bagley warned, guessing how judges will vote in future cases is always risky. It’s not at all difficult to imagine Kavanaugh and the other conservatives voting to strike down the health care law.

“Every conservative judge who has heard this case has said it has merit,” Bagley, a former Supreme Court clerk, said. “I think they’re all nutty, but that should give you pause before writing it off.”

Here’s where things get even more unpredictable ― especially if it’s an eight-justice court ruling on the case.

If there’s a 4-4 tie, with Roberts joining the three remaining liberals but the other four conservatives voting to strike down the law, the 5th Circuit ruling would stand. The law would be unconstitutional, but a district judge would have to decide which parts stay on the books ― after which, potentially, there could be another appeal to the 5th Circuit and then maybe even back to the Supreme Court.

By that time, the law itself could look different, depending on who runs the White House and Congress and what action, if any, they’ve taken to modify the statute or further reform health care.

There are several other possibilities. The court could, for example, hear the case, be headed for a 4-4 tie and call for a rehearing with nine justices so that it could deliver a more definitive ruling. Roberts could also push it back on the schedule.

Almost nothing is certain at this point except perhaps that a ruling to strike down the law would be devastating to millions of Americans, whether it’s people who get Medicaid or subsidized private insurance from the law ― or benefit from its protections for people with preexisting conditions.

Related posts:
Hot News
The US Navy is going to arm all of its destroyers with hypersonic missiles, a top Trump official says
The average credit score by age, state, and year
Mel Brooks Endorses Biden for President in First-Ever Political Video
Purdue Pharma files for bankruptcy
Senate Democrats block GOP's $500 billion coronavirus aid bill as Pelosi-Mnuchin talks continue
NJ Gov. Phil Murphy to quarantine after being exposed to coronavirus
Pension warning as ‘burdened’ Britons urged to calculate when they can afford to retire
Recent Posts
This website uses cookies to improve your user experience and to provide you with advertisements that are relevant to your interests. By continuing to browse the site you are agreeing to our use of cookies.Ok