Will Amazon be the same after Jeff Bezos stands aside?

Will Amazon be the same after Jeff Bezos?

Will it continue to be the same driven, ruthless, ambitious, innovative organisation that it has been in the quarter of a century since Bezos raised $US1 million ($1.3 million) from family and friends to start an online bookstore in Seattle? 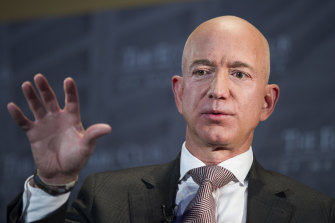 There will be significant interest, inside and outside Amazon, in how hands-on Jeff Bezos turns out to be in his new position.Credit:AP

Those are obvious questions to ponder after last week’s announcement that Bezos was stepping aside as chief executive of the $US1.7 trillion juggernaut to be succeeded by Andy Jassy, the executive who built Amazon Web Services into Amazon’s most profitable business..

Mind you, Bezos is stepping aside, rather than down, taking on the role of an executive chairman.

Had he actually left the business the Amazon share price might have taken a major hit, which perhaps explains why he’s chosen to be an executive rather than non-executive chairman. There will be significant interest, inside and outside Amazon, in how hands-on he turns out to be.

Nevertheless, the decision to relinquish the CEO role he has held since Amazon’s modest inception marks a significant punctuation point in the history of one of the world’s most successful and powerful startups.

Jassy, who has worked closely with Bezos for most of Amazon’s history, presumably shares much of his strategic vision and ambitions for the group but second-generations managers tend not to be as driven as founders.

With Bezos not sharing much of his motivation for the decision – he has said he wants to focus more on his space venture, his philanthropy and the Washington Post – the implications of the decision for Amazon aren’t yet clear.

The displacement of a founding entrepreneur as successful as Bezos in a company that is a reflection of his own ambitions and obsessions – he’s a notorious micro-manager – signals, however, some form of change regardless of whether he’s still in a position to provide guidance and insights.

No matter how talented the executive, or how highly incentivised, a salaried manager brings a different mindset to the role and has a different relationship with the organisation and external parties than the founding entrepreneur.

The external voices gain more weight and the internal voices more freedom once the visionary founder exits or, in Bezo’s case, moves from the executive suite to the boardroom.

Will the markets who backed Bezos from Amazon’s $US382 million IPO in 1997 and applauded a strategy that saw him plough billions into a complex web of expansions – always prioritising market shares and global ambitions over profits – be as tolerant of Jassy?

Jassy, who has worked closely with Bezos for most of Amazon’s history, presumably shares much of his strategic vision and ambitions for the group but second-generations managers tend not to be as driven as founders.

They also confront different challenges. The day-to-day management of a $US1.7 trillion company with nearly 1.3 million employees, global operations and a portfolio of businesses as diverse as Amazon’s is all-consuming.

Moreover, Amazon now faces challenges generated by its own scale and style.

Challenger companies are given a lot of leeway by regulators, customers, communities and employees. While Amazon remains a disruptor, a dominant $US1.7 trillion company doesn’t get the same latitude to operate as it did when it was seen as a challenger.

Where startups can undermine their established competitors by selling products or services at a loss to build market share – as Amazon has done throughout its history – when a company owns about half the e-commerce activity in the US that looks like predatory behaviour.

Amazon is both a retailer and a marketplace for third parties. For much of its history the inherent conflict didn’t provoke much scrutiny. That’s changing, with regulators in the US and Europe starting to focus on claimed abuses of Amazon’s insights into the performance of competitors’ products and services on its platforms.

Big Tech is generally on the nose in the US. Legislators and regulators are bringing anti-trust suits and threatening to break up companies like Facebook, Google and Amazon. Regulators in the US and Europe are taking tougher lines on data privacy. Governments around the world are focused on getting the big tech companies to pay more, or at least some, tax.

Amazon’s employees have been complaining about their working conditions – Amazon is a very demanding employer – and threatening to unionise. 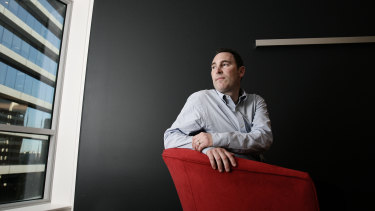 Amazon’s next chief Andy Jassy will face a number of challenges.Credit:Louie Douvis

Jassy’s cloud computing business, which dominates its sector and generates more than 60 per cent of Amazon’s profits, is facing intensifying competition from companies like Microsoft and Google.

The group’s foundation e-retailing platform, which has ravaged retailers around the globe, is facing stiffer competition from the surviving bricks and mortar retailers that have learned from it and invested heavily in their supply chains and fulfilment and are leveraging their physical presence – their store networks – into a different and more competitive “omni-channel” model.

The myriad of challenges that will confront Jassy signal that Amazon has moved into a different and more complex phase of its development and perhaps Bezos’ decision recognises that the group’s leadership structure needs to change and mature to respond to them.

When the pandemic hit the sharemarket last March Amazon was valued at $US850 billion . It’s now worth double that amount, reflecting its status as one of the biggest, if not the biggest, beneficiaries of the big shift online by businesses and households in response to the pandemic.

Some of that increased online activity is structural and permanent, with Amazon arguably the biggest beneficiary.

Under Bezos, Amazon saw itself as a global platform and logistics business that carried and serviced its proprietary businesses alongside those of third parties.

It could be expanded, almost without limitation, into new categories like artificial intelligence, healthcare, financial services and advertising. The possibilities were endless.

There is too much momentum in the business for it to stop innovating or competing but the regulatory risks to its growth and ability to commercially exploit its innovation in the ways it has historically are growing rapidly, along with the risk – shared by the other big techs – that lawmakers and competition regulators will seek to disaggregate it, undermining its scale and the network benefits of synergistic businesses.

Perhaps Bezos saw what the next phase of Amazon’s future might look like and decided that the fun part of building one of the world’s greatest commercial empires is behind it and, even though there is plenty of scope for growth and innovation, Amazon’s CEO is going to spend an inordinate amount of time on unproductive and tedious and unproductive wrangling with external parties.

Like many successful entrepreneurs before him, he may well have looked at that unappealing prospect and decided that he could have more fun and use his energy more productively on smaller or more entrepreneurial ventures while still providing counsel and a guiding hand for the phenomenon that he created.