Windfall for Wesfarmers as it sells $1.1b worth of Coles shares

Perth-based retailing conglomerate Wesfarmers has parted with $1.1 billion worth of shares in supermarket giant Coles, telling investors on Tuesday afternoon it had shaved its shareholding in the retailer by 4.9 per cent.

Wesfarmers, which formerly owned Coles after demerging the company in November 2018, was the company's largest shareholder with a 15 per cent stake. It had been widely expected to sell some of its 200 million shares in recent days. 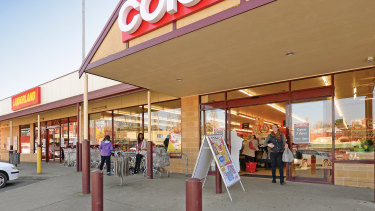 Wesfarmers has sold a 4.9 per cent stake in supermarket giant Coles.

It will retain a 10.1 per cent stake following the sale, the amount required for Wesfarmers to maintain its right to nominate a director to Coles' board.

Coles shares have risen 30.4 per cent since the company's listing, marking a sizeable win for Wesfarmers, with its remaining stake worth about $2.25 billion. It had faced anger from shareholders at the time of the demerger, who had criticised the company for fence-sitting.

"We believe this level of divestment is in the best interests of our shareholders and consistent with our objectives at the time of the demerger, which included demonstrating continued confidence in Coles’ future as a stand-alone listed company," Mr Scott said.

"We have been pleased with the performance of Coles as an independently listed entity and believe it is an appropriate time to realise value for our shareholders while retaining a meaningful interest and ongoing connection with Coles, including representation on its board and through our flybuys joint venture."

In a statement, a Coles spokesperson said: "We note that our shareholder is pleased with our performance and we look forward to working further with them in the future."

Macquarie Capital and UBS will manage the stake, which will be sold to institutional investors.