Aussie tech darling WiseTech blamed the coronavirus for its decision to downgrade its revenue and earnings forecasts for the 2020 financial year as the effective shutdown of China hits global trade.

WiseTech, which provides software services for the trillion-dollar global logistics industry, said the predicted early 2020 recovery from the US-China trade war was "in effect" in January when the virus hit.

"The unexpected outbreak of coronavirus and the effective shutdown of China, a critical driver of the global manufacturing supply chain and a 16 per cent contributor to global GDP, is creating negative flow-on effects to manufacturing, slowing supply chains and economic trade across the world," said Wisetech founder Richard White on the conference call for its half-year results. 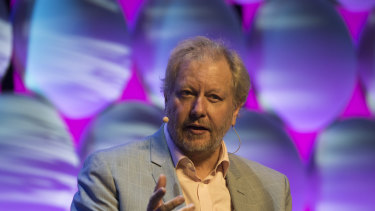 He said while the speed of recovery from the virus "will likely create a significant rebound in volumes" the delay may cause some transactional volumes to move into the next reporting period.

Wisetech's market valuation took a billion-dollar hit with the stock dropping as much as 23.7 per cent to a low of $23.80 in early trading.

The stock was worth more than $38 in September last year when short seller J Capital alleged the company overstated its profits by $116 million since listing on the ASX in 2016 and said its acquisition strategy was failing.

Earnings before interest, tax, depreciation, and amortisation (EBITDA) guidance has dropped from a range of $145 million and $153 million to between $114 million and $132 million.

Mr White said the results were driven by further adoption of its flagship CargoWise One platform, but the $59.9 million profit also included a $32.7 million gain from reduced contingent liabilities relating to acquisition earnouts.

WiseTech's chief financial officer, Andrew Cartledge, told the conference call that it mainly consisted of performance obligations around revenue and earnings for six of its recent acquisitions.

J Capital's allegations included the claim that WiseTech's $400 million worth of acquisitions the company had undertaken since listing on the ASX in 2016 were not paying off.

Wisetech reported that EBITDA for the half year was also up strongly, jumping 29 per cent to $62.5 million.