Supermarket giant Woolworths will not go ahead with building its controversial Dan Murphy’s store in Darwin after an independent review found the company had not sufficiently consulted with Indigenous stakeholders.

Woolworths told investors it would axe its plans to build the Darwin’s largest Dan Murphy’s store within walking distance of the city’s biggest Aboriginal community in Bagot. Local Indigenous community groups had likened the decision to Rio Tinto’s destruction of Juukan Gorge. 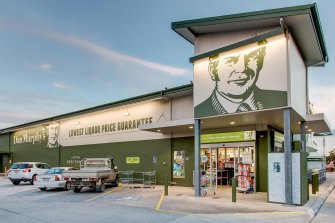 Woolworths has axed its plans to build a Dan Murphy’s store in Darwin.Credit:

An independent panel, lead by lawyer Danny Gilbert, issued a series of recommendations this week to the retailer’s board, including that the development should not go ahead. A large part of the review’s focus was on if Woolworths had sufficiently addressed local concerns about the site.

“The Gilbert Review has made it clear that we did not do enough in this community to live up to the best practice engagement to which we hold ourselves accountable,” company chair Gordon Cairns said.

“In particular, we did not do enough stakeholder engagement with a range of Aboriginal and Torres Strait Islander communities and organisations.” Woolworths will release the full review in June along with a series of responses to its recommendations.

The announcement comes as the grocery giant also unveiled a set of weaker-than-expected third-quarter sales numbers as the business’ revenue began to be compared against the panic buying boom of March 2020.

Comparable sales for the first three months of the year fell 2.1 per cent to $11.1 billion for the business’ key supermarkets division, a bigger drop than the around 1 per cent fall that analysts had been forecasting.

Chief executive Brad Banducci said the lower numbers were due to weaker growth in the number of items purchased by customers and deflation in key categories like fruit and vegetables.

“In general, customer shopping behaviours continue to normalise. While food customers are still shopping less frequently, the growth in the number of items customers put in their baskets is slowing,” he said.

“Customers are also shopping more on weekends, state-based performance is becoming more balanced and there is less divergence in trading across the fleet, other than in CBD and transit locations.”

However, the weaker supermarket sales were somewhat offset by a surge in sales growth at department store Big W, which grew comparable sales by 20 per cent over the quarter to over $1 billion, smashing analyst expectations.

Online sales for the retailer also continued to jump, rising 64 per cent to $1.3 billion across the group. Digital orders now comprise nearly 8 per cent of the company’s total supermarket sales.

Outlook for the start of the fourth quarter was subdued, with Mr Banducci noting sales were largely flat when compared to last year.