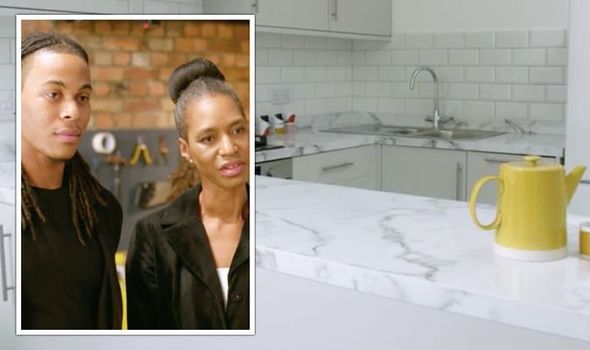 The first episode in series three of Your Home Made Perfect followed the journey of Jacqueline and her 22-year-old son Jamie from East London. Jamie and Jacqueline were looking for some privacy in their cluttered two-bedroom London terrace. One of the main issues surrounding the property was the lack of separate space for each person to socialise.

The bathroom was also located at the end of the kitchen which meant the property had a pint-sized kitchen space.

Lizzie’s design included a “wrap-around roof window” and a bathroom placed under the stairs.

A common problem with terraced houses is lack of light.

They’re often long and narrow which means there are usually windows at the front and back but only artificial lights in the centre of the property.

“Roof lights bring in three times as much light as a traditional window,” she said.

“They are bespoke products but there are manufacturers now that are making these to make them slightly more cost-effective.”

Wrap-around roof windows start at around £2,000 but can add light and a stunning design feature to your home.

However, Lizzie warned homeowners to be “careful” when choosing them as you could end up overheating a room.

She explained: “You do need to be careful though that you don’t have too much roof light because you don’t want to overheat.”

Once a roof light is installed, it makes homes not only look bigger but feel bigger as you invite the outside in.

Lizzie’s design also included an internal window to add more light, however, Jacqueline changed the design so the wall was used for cupboard space instead.

Another way Lizzie sectioned off the home with her design was by putting a wall between the front door and living room to create a hallway.

Before the transformation, when the front door was open, the living room was visible from the street.

Now, there’s a defined entrance which added privacy in the sitting room.

Lizzie used wooden slats instead of a solid wall to add light in her design.

One major feature of Lizzie’s design was the kitchen/diner.

Rather than extending the property into the garden, Lizzie’s design extended the kitchen out sideways.

This added width to the kitchen while not compromising on garden space.

Lizzie said: “Rather than doing a bigger extension, you don’t need to go that far into the garden.

“You protect garden space and we get an amazing functional kitchen and sociable dining space.”

The kitchen/diner which included the roof window is now Jamie’s “favourite” room because of the natural light.

Jamie said of Lizzie’s concept: “Lizzie’s design, I could see and mum getting on with it really well because it had that option of whether you want to be in the kitchen/diner, or I want to be, and vice versa.

“Even when we have friends and family over, we have that option of space.”

Jacqueline was initially “scared” of what the bathroom would look like under the stairs.

However, she trusted Lizzie’s judgement and the end result looked sleek and luxurious.

Jacqueline had budgeted £47,000 for the design and extras but she ended up spending £10,000 due to an unforeseen issue with one of the walls.

Catch up on Your Home Made Perfect on BBC iPlayer

Your Home Made Perfect continues next Wednesday at 8pm