Ten local lifestyle and news websites are urging the competition regulator to break an impasse with tech giants Google and Facebook they fear will send smaller publishers broke.

The group, which includes executives from youth website Junkee Media, lifestyle sites Broadsheet Media, Concrete Playground and Urban List, have come together for the first time in an attempt to raise awareness of their concerns about a new regulatory code devised by the Australian Competition and Consumer Commission and supported by the Morrison government. 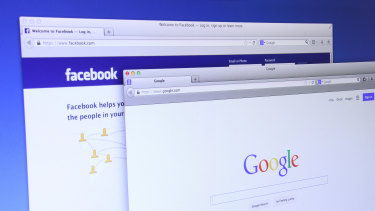 Small digital websites are asking the ACCC to make sure they don’t end up in a situation where Google and Facebook would leave the market altogether.Credit:iStock

In a letter to be sent to the ACCC this week, the group expresses further concerns. "We believe it is important for measures to be introduced to bring the Australian media industry to a more even playing field, however we are concerned that the current proposal has potential to just further entrench the large traditional media companies and accidentally destroy media diversity in the process," the letter reads.

The code is designed to force the digital giants to pay companies that produce public interest journalism for content that appears in search results and in the Facebook newsfeed. Under the code, companies will have three months to strike agreement about payment for the use of articles. If the tech giants and media companies cannot agree, an arbitrator will make the final decision. The code also includes other rules around notice of algorithm changes and use of consumer data.

While traditional media companies like Nine and News Corp have largely welcomed the draft version of the code, which could be legislated by the end of the year, it has been rejected by Google and Facebook.

Facebook told its users two weeks ago that it would pull news articles from its main website and Instagram in Australia to avoid being penalised. Google has separately said the proposed rules would "dramatically worsen" the experience for its local users and lead to privacy risks, claims which have been disputed by the ACCC and Morrison government. Privately, senior figures in the company have said the rules could threaten the existence of Google search in Australia.

Most of the small publishers who will speak to the ACCC this week will not be eligible for payments under the code. Facebook's threat would mean that their articles would also not appear in the newsfeed or on Instagram. This is because the code includes anti-discriminations rules, which prevent the tech giants from treating publishers that are eligible and ineligible to be paid differently. They first raised their concerns last week.

"Banning news content would have an outsized effect on smaller, digital publishers like us, who have for years been courted by Facebook as trusted partners to share news and information to our
audiences on their platform," the group says. "It would also be yet another blow to important local industries like hospitality, tourism, the arts and cultural institutions that support many small businesses who have already been heavily impacted by Covid-19 and rely on us to help reach consumers."

In other markets where regulators have attempted to crack down on Google and Facebook, the tech giants' retaliation caused large falls in traffic, particularly for small publications. A 2017 study by the Stanford Graduate School of Business found that after Google News shut down in Spain, consumption of news for users fell by 20 per cent. The decrease was particularly bad for small news outlets.

"We acknowledge this is a complex issue, but Facebook’s threat to remove all news content from the Australian marketplace would have serious ramifications for Australian audiences, be a hit to media diversity and would increase the threat of misinformation in the middle of a pandemic if trusted publishers’ voices cannot be heard," the group says.